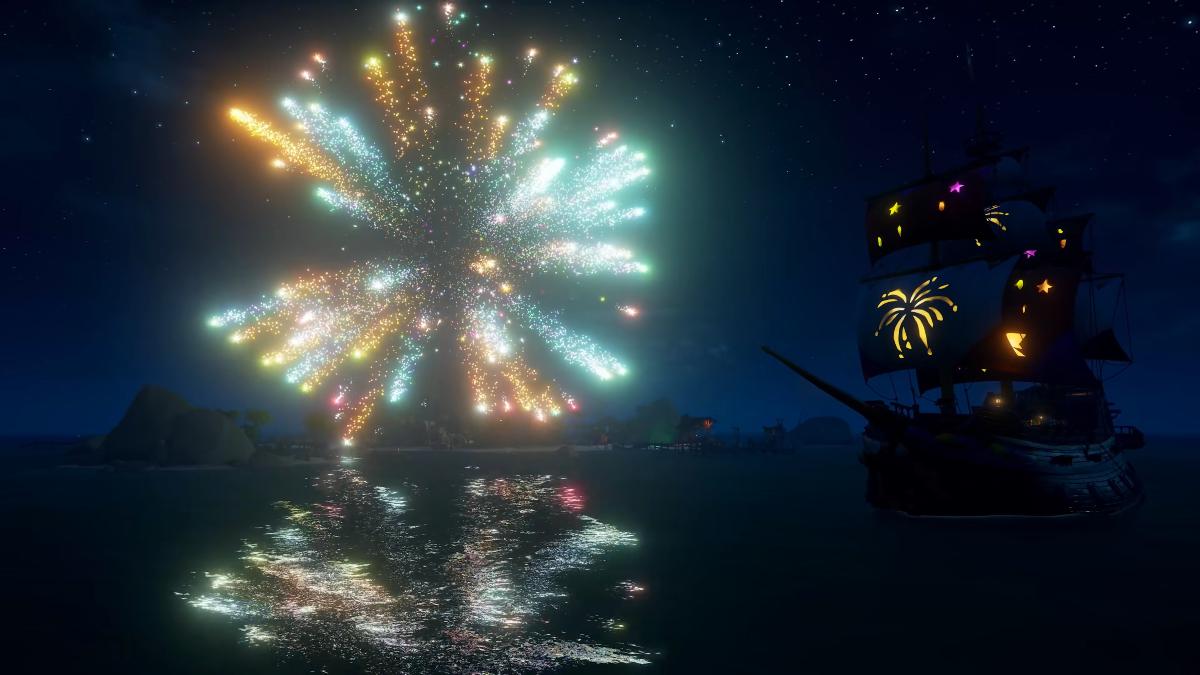 Getting Fireworks and Finding a Crew

You’ll need to gather some Fireworks to start, which you can find as random spawns in Resource Barrels. If that’s too much work for you, however, and you have the Gold to spend, talk to a Merchant from The Merchant Alliance shop on any Outpost. Select the Browse offers, Resources and Commodities option, then select Browse Fireworks. You can then purchase a crate of any type for 20,000 Gold, which is the easiest and fastest way to get Fireworks.

For the next step, you’ll need to find another crew’s ship. To do so, check for ships marked with a Reaper’s Mark at the Map Table, sail to active events, or sail the seas while keeping an eye out. Whichever way you want to go about it, you’ll eventually spot an enemy ship. This Commendation reportedly won’t unlock against Skeleton Ships, so you need to find a Player ship.

Related: How to get the Warning Shot Commendation in Sea of Thieves

Setting an Enemy’s Ship on Fire

If you’ve spotted an enemy vessel, either attack them head on or try to make friends with them using voice chat or text chat. If you choose the latter option, you can ask the other crew if they will let you get the Commendation. Offer to help them afterward. If they say no, you could just play the role of a pirate and attack anyway. Regardless which way you go about it, be sure to load your Cannons and have your inventory filled with Fireworks.

Now comes the hard part — you need to start a fire on an enemy’s ship with Fireworks. You fire the projectiles from a Cannon just as you would regular Cannonballs. Unlike Cannonballs, though, Fireworks will spin and wiz around on their path forward, making it challenging to aim. What’s more, Fireworks only have a small chance to start a fire, so even if your sparks hit the vessel, it’s not likely you’ll succeed. This means there’s a good bit of luck involved in getting this Commendation. Once a fire starts on their ship, the Commendation will unlock.

If you’re going for Gunpowder, Treason and Plot in the hostile rather than friendly way, you’ll want to play with larger Galleon crew who can protect you (if possible), and you’ll want multiple crates of Fireworks. Also, you have to be the one to set the fire to get the Commendation. We haven’t tested whether this Commendation unlocks by fulfilling the requirements against an Alliance ship, but it’s worth trying if you get the chance.