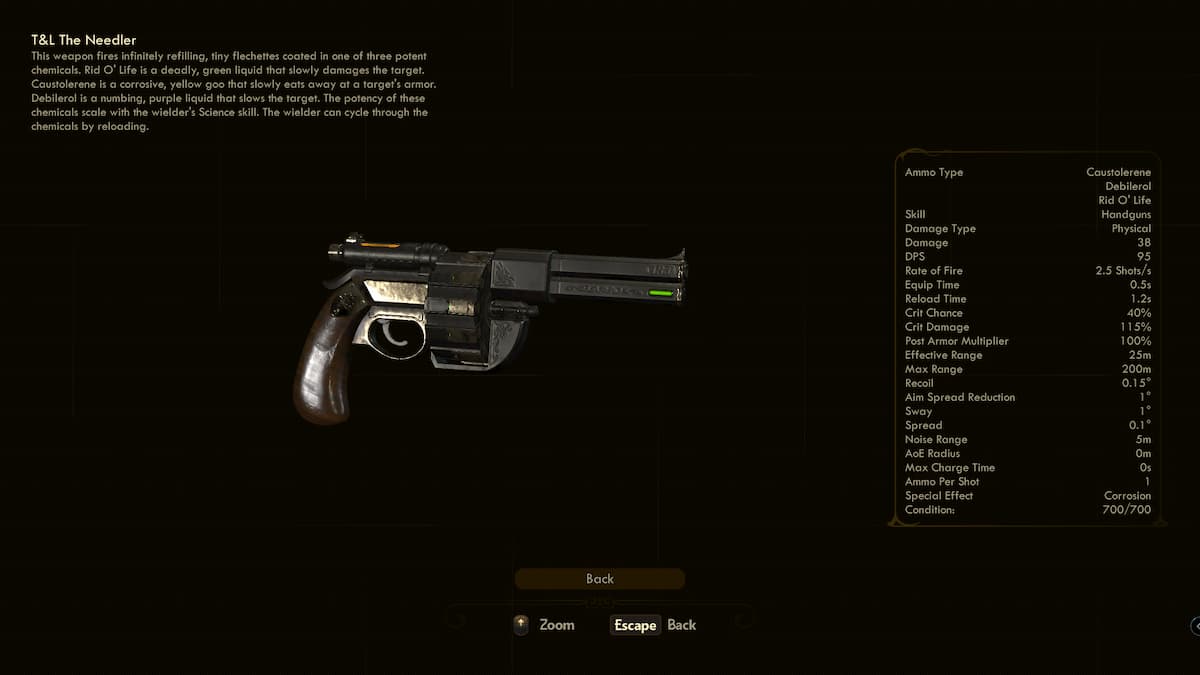 The Needler is one of the three new Science weapons in The Outer Worlds latest DLC. As you work your way through the Murder on Eridanos, you’ll start to learn more about aetherwave star Halcyon Helen and her famous sidearm. Near the end of the tale, you’ll finally have a chance to try out The Needler for yourself.

It’s important to note that this guide will delve into some story spoilers for the Murder on Eridanos’ end-game. We recommend running through the DLC yourself and coming back if you couldn’t find The Needler on your own.

To get The Needler, you need to reach the “Naked Hunch” quest. It unlocks after you tell Ludovico who you think the killer is. The quest takes you over to Rizzo’s Distillation Factory, where you’ll meet up with Halcyon Helen and Ludovico. We won’t spoil how or why she’s alive, but she’ll give you a choice to make. Whether you choose to side with Helen or Ludovico, you can still get the gun. You need to make some specific choices if you want to do so.

If you side with Helen, you’ll need to run out of an exploding Distillation Factory. After escaping, you’ll meet up with Helen back at your penthouse before heading into the next story mission. There, you’ll have the chance to ask her to use The Needler.

Once you’ve ran through her dialogue about the mission, you’ll get the chance to persuade her to give you her sidearm. Just select “Not so fast. Let me borrow your Needler” and, if you have a high enough persuasion rating, she’ll pass it along.

If you side with Ludovico, you won’t get access to The Needler as quickly, but you can still pick it up. Once you head over to The Pilothouse to do the next quest, you’ll find yourself waylaid by enemies. After you deal with them, Helen will come to confront you. Turn down her last chance pleas and murder her. Then, you can pick the weapon up off her corpse.

Regardless of how you acquired The Needler, you now have one of the more fun guns in the game. The Needler doesn’t require you to reload. Instead, reloading changes the ammo type. There are three different ammo types for you to switch. Here they are:

Swapping between the three ammo types lets you tear through enemies and quickly deal with anything the game throws in your path. It’s a worthy reward for finishing off the latest DLC.