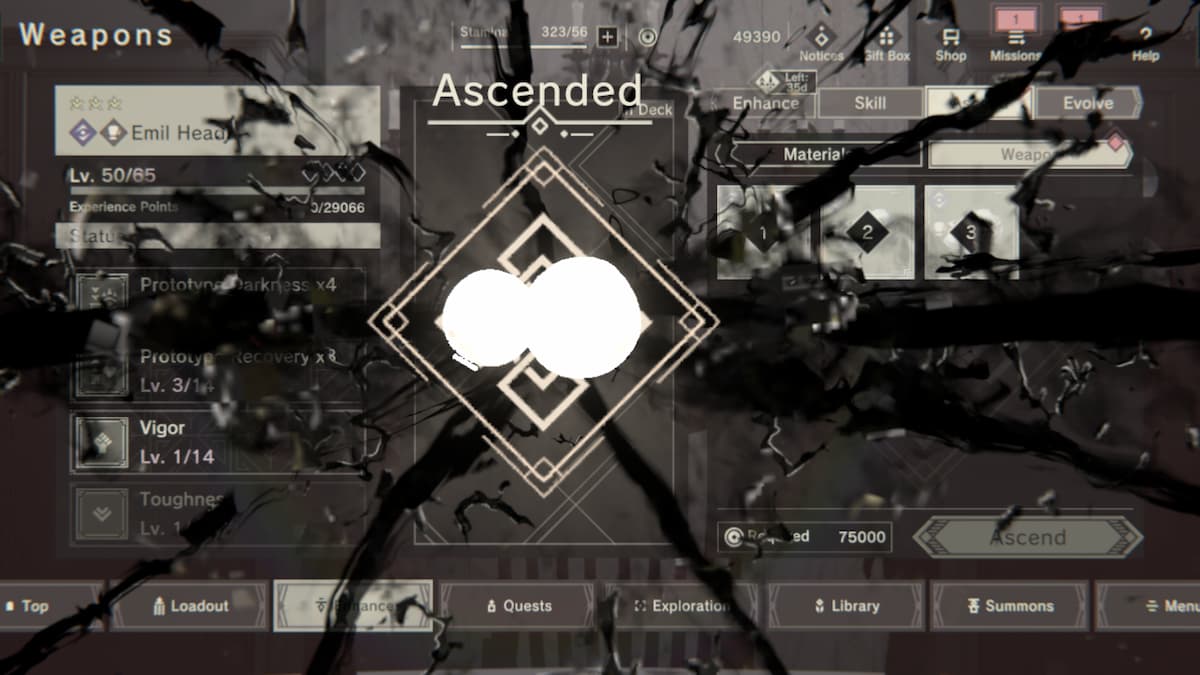 In order to get the absolute strongest team possible in Nier Reincarnation, you’ll need to improve your weapons using each of four methods: Enhance, Skill, Ascend, and Evolve. To learn how to do each, we’re going to go over an example with images.

How to see the Weapons improvement menu

First, open Mama’s menu and select the Enhance option, represented as a house to the far left, or as a button third from the left from inside of other menus. This will open up another menu, seen above. Select the Weapons option, second from the top. Then, open the Weapons tab, which will bring up a menu showing all the weapons you own, like in the image below.

Third, select a Weapon by tapping on it. This will bring up the enhancement menu for that weapon, showing all the possibilities for improvement. That menu looks like the image below, where we’ve started the process of enhancing a pair of boxing gloves called the Emil Heads. In the next section, we’ll go through all the different types of weapon enhancements step by step, using these Emil Heads as an example.

Enhancement is the basic type of weapon improvement, which raises the raw stats like HP, Attack, and Defense of a given weapon. The basic enhancement menu looks like the screenshot above, where we’re using XL Weapon Enhancements to level up our Emil Heads to max level.

To do this with your own weapons, open up the enhancement menu for your weapon, then select the number of enhancements you want to use, then select enhance. Confirm to spend gold and enhancements, and you’ll have a max-level weapon. But there are still more ways to improve this weapon, and you can raise the weapon’s max level using the Ascend feature.

In addition to raising your weapon’s level, you can also improve the weapon’s active skill. Above is an example screenshot of what the Skill Enhancement menu looks like with our favorite weapons, the Emil Heads. Here with the Emil heads, we see that when we enhance this weapon skill, it will deal 1% more damage per hit of the active skill. Other weapon skills for the Emil Heads include improving Attack and Toughness. Other weapons will have different skills to enhance.

To enhance the weapon skill, select the weapon skill you want to improve and press Enhance. You will be asked to confirm the number of enhancements you want to do and be shown the required materials. These materials are earned by rolling quest summons, and mostly by completing Guerilla subquests. Select Enhance again to confirm, and now your weapon skill is even stronger.

The third way to improve your weapons is to Ascend them, which will raise the max level of the weapon. To do this, you can use Natural Pearls, a very rare material purchased from the shop, or you can use duplicates of the weapon. Under the Weapons section, you can see that we have 3 extra Emil heads lying around, just waiting to ascend this Emil Head we’ve got here.

Select the weapons you want to use for this ascending, and then confirm. Keep in mind that this process is very gold intensive, so it should only be done with weapons you intend to use for a long time. Confirm, and now you’ve got a weapon with an even higher max level.

The final, most powerful, and most difficult way to improve your weapons is Evolve. Evolving consumes extremely rare materials, such as Tanzanite, and raises the rank of a weapon by 1 star. We didn’t have enough Tanzanite on hand to get you a good example just yet, but the process is basically the same as all other types of weapon enhancements: you pay the price and reap the rewards.