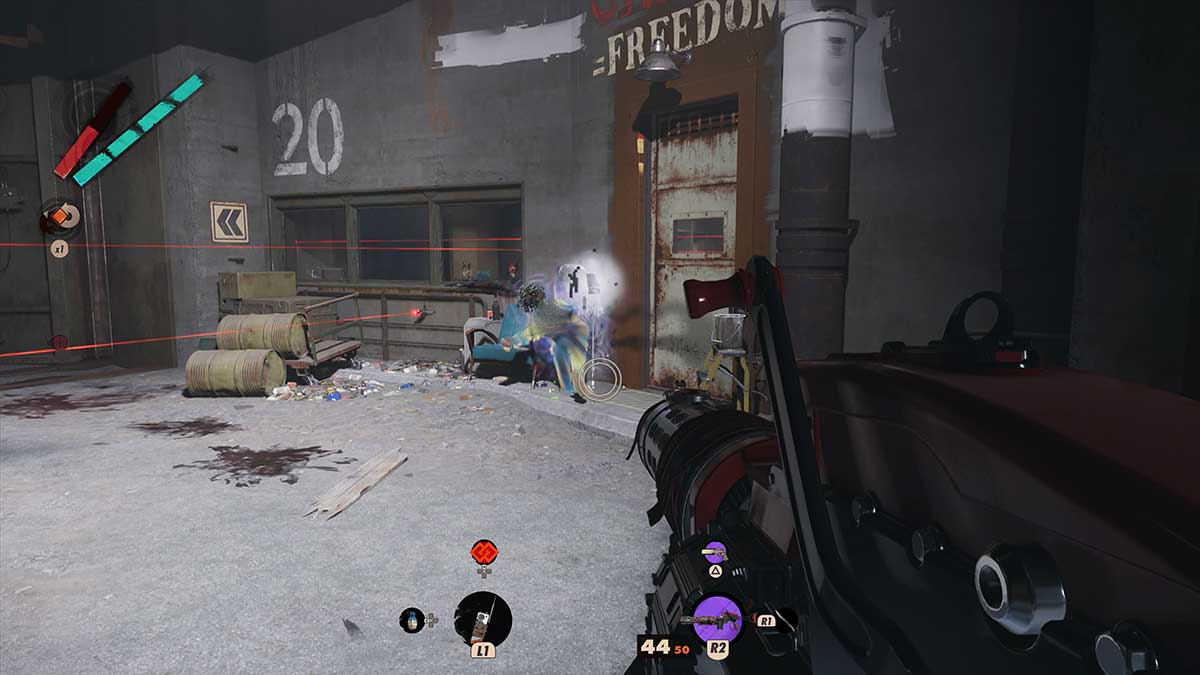 Egor is one of the Visionaries in Deathloop that becomes more challenging to kill as the loop wears on. Part of the reason he’s so hard to kill is the Aether Slab that he uses, which allows him to become invisible for short periods of time. In this guide, we’ll show you how to kill Egor, get his Aether Slab, and kill Julianna for a bonus upgrade to the Slab as well.

We only managed to pull this off by allowing Egor’s experiment to discover a signal earlier in the day. As a result, he’s hanging out at The Complex in the evening, which is where you need to go to get the Aether Slab. If you’ve allowed this to happen, then Julianna is also in the area, making for a deadly combination. So bring your best weapons and be ready for a fight.

As you leave the tunnels, you’ll realize that The Complex has a very different feel to it. Egor has become so paranoid that everyone else will mess up his experiment that he’s placed explosive traps all over The Complex. As a result, you can barely move out of the tunnels without triggering one. There will be a few enemies hanging out near the tunnels, but they’re so concerned that Egor will kill them that they won’t notice as you sneak up and kill them instead.

Step 2: Kill Julianna (when she appears)

Since Egor has placed traps everywhere, it’s only a matter of time before Julianna figures out where you are. When she does, it’ll trigger the tunnels to lock, so you’ve either got to unlock them or kill her so that you can unlock them later at your own pace. We found that Julianna appeared within the first five minutes of entering The Complex, though this may be different for you.

We used the traps around the island to force Julianna into a small area and trap her. She couldn’t dart around and avoid out attacks because she would have triggered an explosion. As a result, we only died once when fighting her and killed her pretty quickly with our most powerful weapon. When she dies, she will drop the Aether Slab. If this is your first time getting it, you’ll be able to equip it and use it to become temporarily invisible. If you’ve already got the Slab, then you’ll pick up an upgrade for it from Julianna instead.

Next, you need to make your way slowly towards Egor’s Camp. It’s the elevated base off to the side just as you round the corner and start to see the sea on your right. However, the path there is incredibly dangerous. You’ll need to hack every turret and camera you come across. Ensure that you sneak everywhere so that you have plenty of time to get near mines and disarm them before they blow up. The laser mines are obvious, but you’ll need to keep an ear out for the proximity mines to avoid being tripped up by them.

Once you arrive at Egor’s Camp, Egor will probably try to kill you. He’s outside using his Aether Slab to hide in plain sight. The Slab has limited energy, so you’ll see Egor appear now and then as he ducks for cover. Use this to your advantage, and fire at the area you see him in to draw him out and land some damage on him. We remained inside of the building that Egor’s been working in because it provided great cover. However, you can head outside and use the Null Field Generators to prevent his Slab from working and reveal his position. While we fought him, he fell from a high point, giving us a decent window of time in which to deal damage and kill him.

Once Egor is dead, you can pick up the Aether Slab from his body. If you’ve already got it, then this will be an upgrade you can take with you into your next loop by infusing it.

All you can do now is exit. However, if you investigate Egor’s personal computer, then you’ll discover an opportunity to kill him in the same location as another Visionary in the future, so it’s worth exploring a little before you leave.