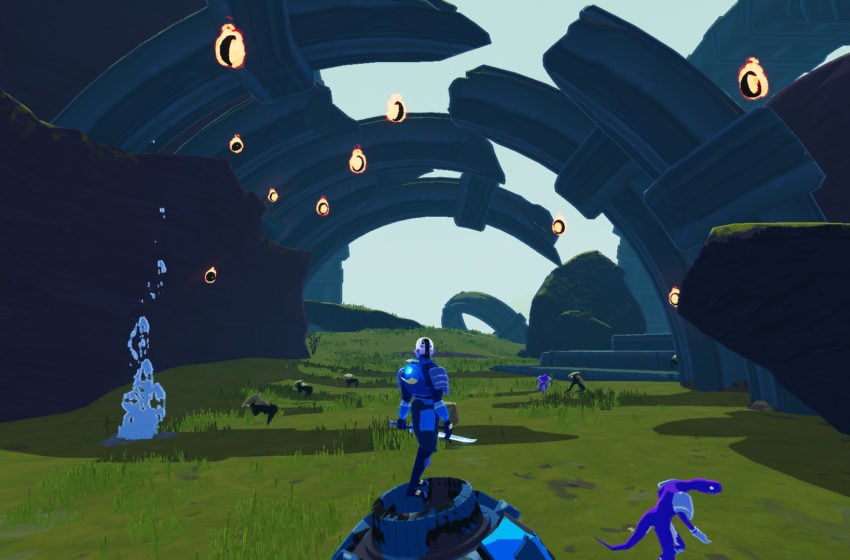 Risk of Rain 2’s final boss is an entertaining fight, with some interesting mechanics. The first thing you will need to do is actually find the boss, which is done by coming across the Primordial Teleporter. This will whisk you off to the moon, for a jaunt towards a towering arena. When you get there, it will be time to face Mithrix, the final boss.

This guide is obviously a spoiler for the final fight, and we would recommend you experience blind at least once, as it is a lot of fun.

The game will endlessly cycle through levels, pitting you against waves of monsters, until you pass through the Primordial Teleporter. It will look very similar to a normal teleporter but will have some large stone teeth all around it.

The Primordial Teleporter can start to spawn pretty early in a run, normally after going through each stage at least once. It will spawn in a similar way to a normal teleporter and will be randomly located in the level. If you find the teleporter but want to continue your run instead of taking on the boss, you can interact with the teeth, sending you off to another normal level and not the boss fight. You can then use the next Primordial Teleporter to go to the boss fight if you wish, or just do the same thing again.

You can use this the same way as you can any other teleporter. Activating it will start a boss fight and a countdown, and if you survive, you will be whisked away to a new area. You will need to fight some interesting new enemies as you make your way to the large arena you can see in the distance. There will also be some awkward jumps, but you should be able to make your way through them, regardless of the Survivor you are playing as.

After that, you need to search the area to find four pillars that you will need to charge up. You will need to stay within a certain distance of them and take out waves of monsters while you do this. They can spawn in random locations each time, so you’ll need to track them down for each run.

When they are all charged head to the central area of the level with the massive tower, and some beams of blue light will have appeared. Jump into one to head for the upper platform and the final boss.

The first stage of the fight is quite simple. Matrix will charge at you, swinging his mighty hammer straight for your head. The best thing to do here is to distract him or keep as much distance as you can. Engineer turrets will tie him up for a while, and other characters can just kite him, as he will stop in place when he swings his hammer, giving your room to move. Just chip away at his health bar until he retreats to the center of the arena again.

The second stage will see lots of lesser enemies spawn in, including some flying ones. They can, if they combine their fire, do a lot of damage. Take them out one at a time, focusing on the ground targets first, as the aerial enemies tend to keep out of range and are less of an immediate threat.

The third stage sees Mithrix return, but this time he will be causing massive explosions of energy to erupt from the ground while he tries to hammer you into a pancake. Dodge these at all costs, as they do an extraordinary amount of damage and can easily kill you. When this round is complete, it is time for the most fun part of the fight.

Mirthrix will return to the center of the arena and draw all your items out of you. He now has all your power, and you are just a starting Survivor again. You want to instantly get within range and start pelting him with attacks, everything you can muster. Each time you chip away some health, you will get one of your items back, and you want to strip Mithrix of as many items as possible before he comes for you again. Eventually, the tide will turn in your favor as you will have more items than he does, and after that, it should be a simple process to finish him off.

When the fight is complete, you need to make your way back to the ship within a small time limit, so don’t stop to fight anything, just keep running. When you return to the ship, you need to charge it up, so you need to get to it as quickly as possible. Once it hits 100% within the remaining time, you can safely leave the area and will have finished the game.