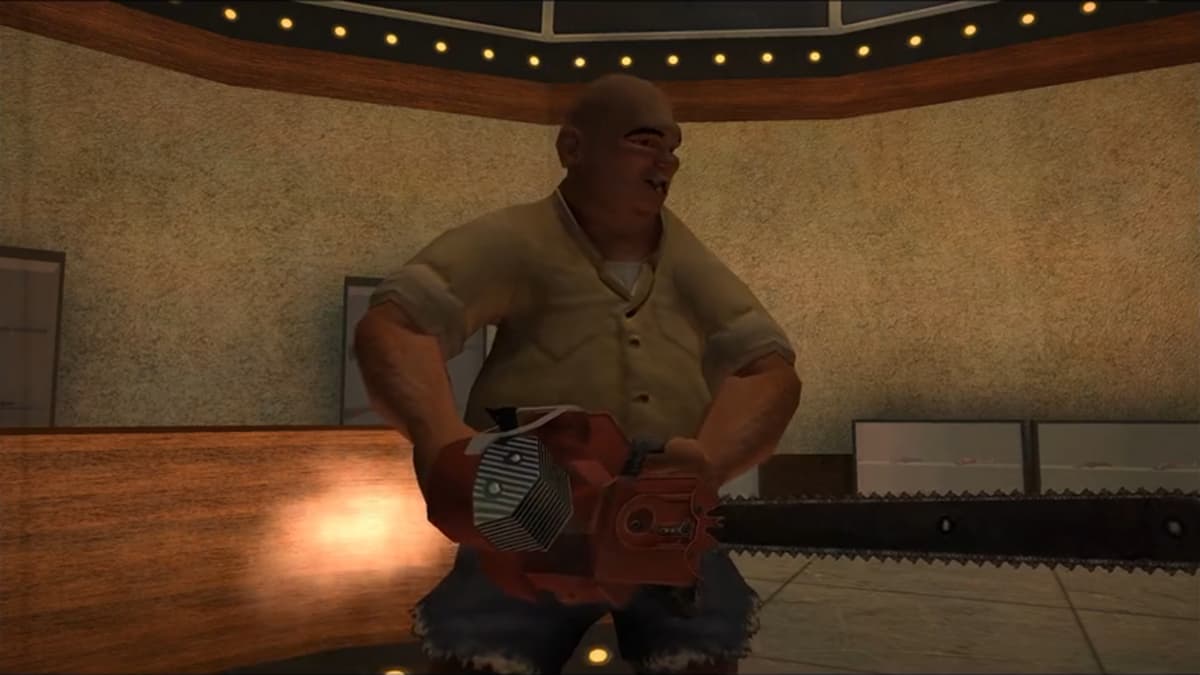 As you play through Stubbs the Zombie in Rebel Without a Pulse, you will come across quite a few different enemies. Between ordinary civilians, police officers, and the militia, there are a lot of people looking to send your undead corpse back into the ground. The militia is a group of rednecks with shotguns that have taken over the city’s mall. Generally, as a zombie looking for brains, this area is like a buffet for you and your growing army. Once you reach the end of this level, though, you will come across a boss fight that can prove to be a little more challenging than what you have seen to this point in the game. Here is how to kill the chainsaw boss in Stubbs the Zombie in Rebel Without a Pulse.

To find this boss, you need to fight your way to the top of the mall after you are introduced to the militia enemies. Most of these rednecks are wielding shotguns, so be careful about their powerful blasts. Luckily, they only have two shots at a time before they need to crouch down and reload. That leaves a wide window for you to move in, attack, and eat their brains.

When you get to the middle platform at the top of the mall, you will see a short cutscene with an older man and the bigger guy holding the chainsaw you are about to fight. When you get control back, we recommend walking outside of the store you are in and whistling for your zombies to come to you. You can use them to distract him and get a couple of hits in on him but beware; he can still hit you with the backswing of his chainsaw and do some damage to you.

Throughout this fight, we recommend not using any of your special abilities. Most of them do not affect the militia boss, and in other cases, you could accidentally wipe out some of your zombies, getting rid of your distraction for him.

When the boss gets close enough to you or any zombie, he will start swinging his chainsaw around. Wait for him to swing the chainsaw three times in succession, then he will have a short pause. During this pause, you generally have about enough time to get two melee attacks on him. Be sure not to get greedy because if you try to go for three, you are leaving yourself open for damage from him, and his attacks take a good chunk of health away from you. Now and then, he will have a short stun phase where you can land more hits on him, so take advantage when you see the chance. If he does hit you, be sure to run from him until your health regenerates. He has no ranged attacks, and he is slow-moving, so you should have plenty of opportunities to create distance.

After you get enough hits in on him, he will drop his head to the side, and you can tear off his left arm. Unlike other enemies to this point, taking off his arm will not kill him. You can use this severed arm to land a few hits against him for more damage than usual, but you only get three strikes before Stubbs drops it.

In this phase, the attacks from the boss are more of the same. He will swing the chainsaw three times, although in a slightly different pattern. Continue what you have been doing up to this point until he is stunned and you get a prompt to eat his brains. Do so, and the boss fight will end, and you will move on to the next level.