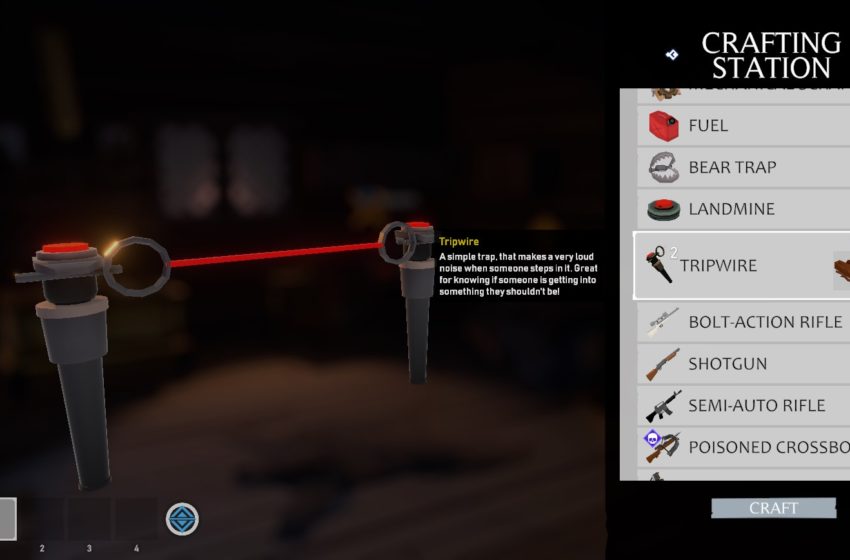 The tripwire item in Project Winter is a great way to protect objectives while you’re away or set up an ambush as a traitor for any of the survivors you want to take out. The tripwire does not damage the player who trips it, but it activates an alarm to ensure everyone knows it went off, and you can promptly run over to it. You can craft the item at the workbench inside of the cabin.

To create the tripwire item, you will need two pieces of wood and one stone. You can do this relatively early in the game before you craft resource tools, but you probably want to wait until you and your allies have made progress with the first objective. If you’re playing as a traitor, crafting this immediately to use later in the game is probably a good idea because you may lose access to the cabin’s workbench later on.

When you have it, equip it in your toolbar, and you can freely place it down on the ground to protect pathways to objectives. You will be able to see the highlighted area the tripwire will cover before you place it down.

Alternatively, you can approach objectives and add the tripwire to them so anyone who attempts to tamper with it will set the alarm off shortly after they interact with it. The tripwire works on objectives and other interactive objects, such as dead bodies and bunker consoles. When it goes off, the tripwire gives off a loud noise, and an alarm trigger pops up on your screen to point in its direction.