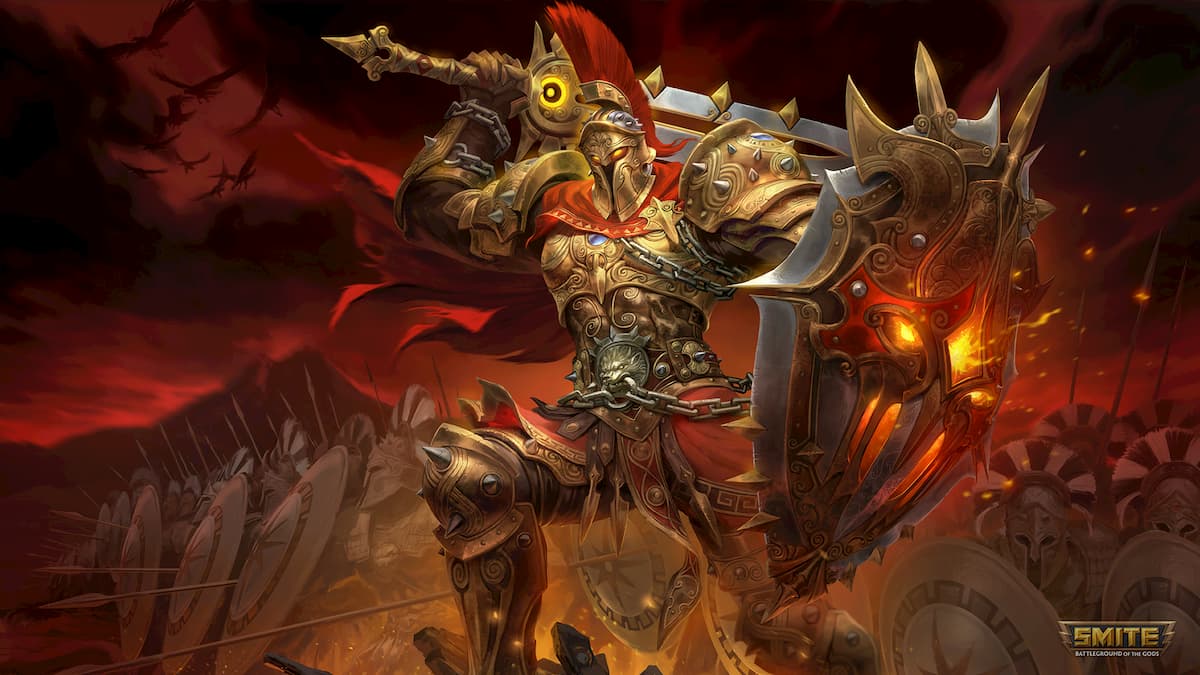 Ares, the Greek god of war, is a force to be reckoned with, and in Smite, he’s a guardian you primarily want to see in the support role. He’s teaming up with your team’s carry, and he’ll be providing the heavier starts in the support lane to ensure they can level up, and during the mid to later portion of the match, he’ll be attempting to start team fights due to how aggressive he can be in a battle. We break down how his abilities work, how you should build them during a game, and the best item builds to give him.

We’re writing this with the concept of Ares filling the support role.

All of Ares’ abilities in Smite

These are all of Ares’ abilities in Smite, and how they work.

Ares’ first ability is called Shackles, and a chain extends out from Ares’ shield and connects to an enemy god if you can land a hit. When an enemy is attached to Ares’ chain, their movement speed is lowered, they are taking damage, and they provide Ares with a movement speed buff. Ares can fire out three of these chains. However, to fire an additional chain, Ares must land the attack against an enemy god. If chain one or two misses, he cannot fire out the next one. These chains pass through and damage minions.

The ability fires out from Ares as a projectile.

Ares’ second ability is called Bolster Defenses, and it increases the defenses of those around him, gods and allied minions alike. Not only do their protections go up, but their crowd control reduction goes up, and health regeneration (HP5). Also, for every enemy Ares has shackled at that time, it increases the protections bonus by 7.

It extends out to 35 units around Areas.

The third ability Ares can use is called Searing Flesh, and it features a breath of flames that releases from the front of Ares’ shield. Enemies hit by the flames take damage every .5 seconds, and while activated, Ares is immune to any knockback abilities.

The ability extends out as a cone in front of Ares.

The final ability Ares can use is his ultimate, No Escape. When you use it, Ares leaps into the air, chaining all of the enemy gods that are around him, and after 2.5 seconds, he slams to the ground, grabbing every enemy he chained to his position. Those who were chained tame a specific amount of damage, and they’re stunned for 1 second. It has the same radius as his Bolster Defenses ability of 35.

How to level up and use Ares’ abilities

Ares is one of the more aggressive guardians you choose to play as in Smite, despite his role as the watchful protector of your team’s carry. The first ability you always want to grab when you start the game is Searing Flesh. It will help you and your carry clear the purple jungle camp, the one you start at, before making your way to the lane. From there, you can use it to help clear the wave as you push the enemy back.

For the early portion of the game, you choose how you want to play Ares and what ability you level up. You can choose to primarily put all of your points into Bolster Defenses or Shackles. Bolster defenses increase your carry partner’s protections and the minion wave, making it harder for the enemy team to knock it out. Alternatively, if you level up Shackles, and you’re good at aiming it, you’ll be able to pepper the enemy team with hits, forcing them to remain more defensive. But that does leave your Ares vulnerable, likely taking several hits from the enemy minion wave.

Of the two options, we recommend leveling up Shackles as much as possible, then Bolster Defenses for that solid HP5 regeneration, and Searing Flesh last. You want to level up No Escape, Are’s ultimate, whenever possible.

With Ares being a guardian, you want to grab guardian’s blessing and then Glowing Emerald to purchase Gauntlet of Thebes eventually. Gauntlet is the primary option for nearly every support god. After that, you want to go into Shoes of Focus to reduce Ares’ cooldown timer and give him a decent mana boost.

Ares’s primary way to benefit the most from his items is to make sure that nearly all of them, except his boots, has an aura passive ability. This allows Ares to make the most from his passive, increasing his magical power by 30 for each one. If you slot in five items, that’s a 150 magical power, making Ares aggressive support with a hefty amount of damage tied to his abilities. For his third item, after boots, you want to go with Mystic Mail, Shogun’s Kusari, or one of the anti-heal items, Pestilence or Contagion. Of the two, we recommend Contagion as it gives Ares a much-needed MP5 and mana increase, ensuring he can use his powerful abilities fairly often before having to return to base.

These are the other items we recommend you put Ares. Not all of them have auras, but they’re handy for any guardian to consider using.