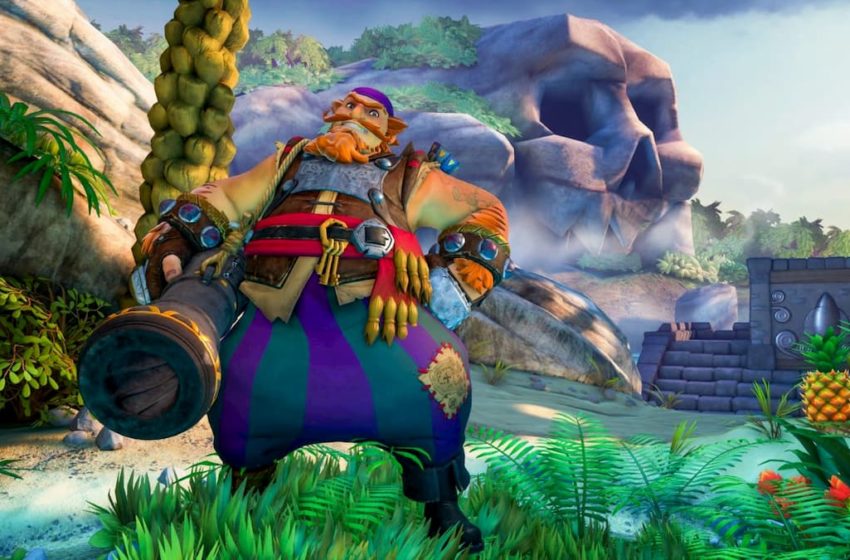 Many of the heroes of the crater in Rocket Arena are stylish and cool in both appearance and attitude. With green and purple striped pirate pants, it’s hard to decide whether Blastbeard is the fliest of them all or a walking fashion faux pas. Either way, he’s a behemoth in the arena and one of the best offensive characters.

Breaking the game with Blastbeard

He is a big target and a poor jumper, but Blastbeard more than makes up for his deficiencies with some really heavy artillery that can wreck your opponents easily. If you’re looking to play offense and wrack up knockouts, you can’t go wrong with Blastbeard. Not only can he dish it out, but he can take a hefty bit of damage, too, and can use his sizable weight to save his life from being blasted out of the arena.

Blastbeard is one of the best choices for good old Knockout rounds. He’s a natural offensive player and can easily wreak havoc with all of his arsenal in this mode. Shockwave can be especially good for team tactics when you need to protect your buds and give everyone a moment to recuperate.

Blastbeard is a big man. He’s not who you’d pick for your wide receiver so maybe don’t have him get the ball in Rocketball. Instead, use him to work wonders and wreak havoc as body guard for whoever is the ball carrier. His Shockwave can easily clear an area when things are getting chaotic and your ball carrier needs some room to breath. His Shockwave is also great for defending the actual goal. Really, Shockwave is great for everything.

Shockwave. Need we say more? As everyone crowds into the zone to capture the control point, use Shockwave to clear out your opponents. Follow up with your other attacks and there is little else to worry about. It takes some time for Blastbeard to hustle to the next missile point, but usually your team has plenty of time, and it’s not so bad to have Blastbeard show up late to the party and use his arsenal to clean up after everyone else.

If only Blastbeard could use his Shockwave while holding the chest! While his slowness would presumably make him not the ideal candidate to hold the treasure chest, his durability does go a long way in this mode. With one of the most powerful primary rockets in the game, he can also rocket jump to scale up walls and use verticality to his advantage. It certainly helps that he never needs to reload. He is not the quickest at collecting coins, but he is pretty good at preventing any opponents from having fun.

In Rocket Arena, straight up offense isn’t always your best bet, but if you’re playing as Blastbeard, it definitely is. Pull on your pirate pajama pants and you’ll find you can easily beat everyone else with Blastbeard.