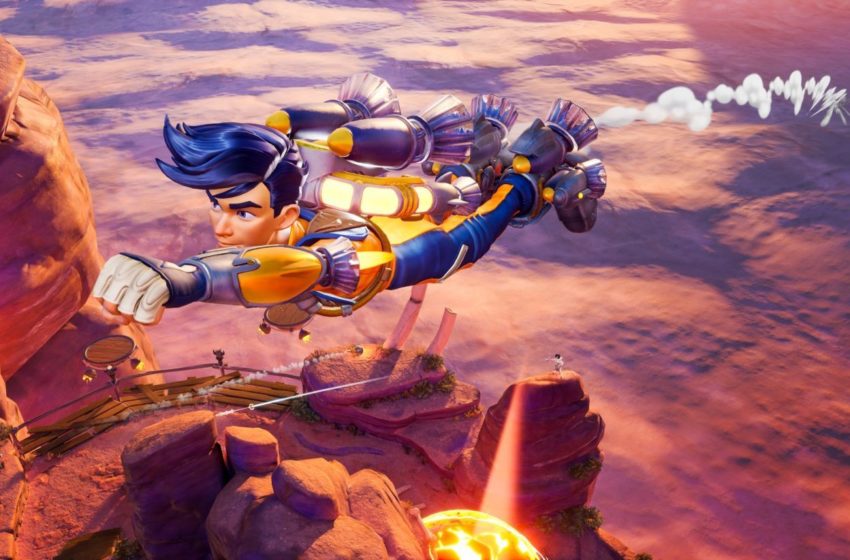 To the extent that there is a story in Rocket Arena, it is said that Jayto won the last year’s Rocket Arena trophy. How pray tell? We’re not exactly sure. He doesn’t really excel in any remarkable ways despite how much effort he clearly puts into his hair. Nevertheless, if played with patience, Jayto can be a good all-around character that can handle a variety of situations.

Jayto’s characteristics include a little bit of everything to the point of being bland. But he’s also just fine. He’s got a fine jump, fine speed, fine weapons. You could drop him in any game mode or any situation and he’s not inherently disadvantaged the way certain characters are. That said, we did find there are ways to make the most of Mr. Vanilla’s arsenal.

While Jayto doesn’t do anything exceptionally, he isn’t inherently held back by different modes or arenas. He can be a good all around offensive player in knockout although there’s a good chance he isn’t going to be carrying the team. Rather, he works well when used patiently to chip away at your opponents. His speed and agility does let him get out of hairy situations, so if you can keep yourself alive, he works well as a supportive offensive member for any team in Knockout.

Like in Knockout, Jayto can be a decent choice for most situations in Rocketball. He falls flat when doing pure goal defense, but if the Thruster Suit is used effectively, he can move around, get to the ball, and get off some shots on anyone nearby.

Depending on the arena, Jayto can actually stand out pretty well in Mega Rocket. If the arena is something like the Golden Zephyr, where the missiles don’t land on flat areas, he can be especially good at getting in a zone and circling around a structure to stay safe or track someone else down. The Thruster Suit makes him even more effective at moving across the arena and around structures. Just hope your teammates have some heavier weaponry to really knock out your opponents while you run circles around them.

Jayto can serve you fairly well in Treasure Hunt for reasons similar to Mega Rocket. His mobility and overall versatility make him a good candidate to grab the treasure chest, defend himself, and move around as well. Make sure to always have your Thruster Suit primed and ready for when the coin phase starts so he can pick up more of them faster.

He might not be a top tier competitor in Rocket Arena, but he’s a good choice for when your first dipping your toes in the water, or if you’re looking to be able to hold your own while getting familiar with the arenas.