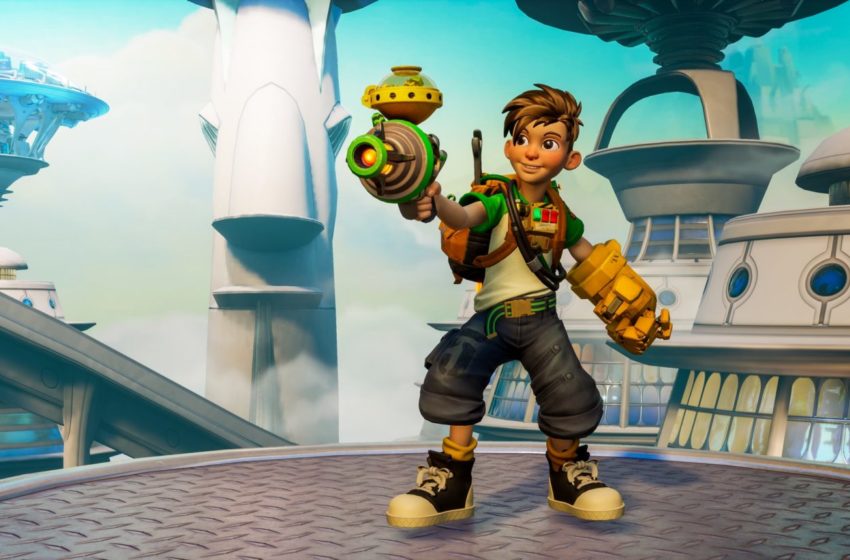 It cannot go unstated: Plink is a child. What this boy is doing the the Crater competition this year is beyond us, but according to Rocket Arena lore, he is also a RocketBot repairman (boy). If he’s savvy enough to do that, it’s not too big a leap to consider he could be a competitor as well. And what a competitor he is! Plink is a great character to play, especially for people just getting into the action. He’s easy to pick up and be effective with, but has a surprising amount of depth as well.

Plink is mostly designed for close range combat—his arsenal can quickly close the distance and wreak some havoc. He can still do some damage from a ways away, but you’re going to want to get in and out with Plink and dish out damage in a short amount of time and then get out of there before he gets knocked out. He’s a great character to play offense with while still surviving most skirmishes. It helps that he has the tools to do so.

Plink is a great offensive character. Despite his evident boyhood, he can be very effective in these modes, especially with his ability to do damage and get away. You want to get knockouts, but you also don’t want to be sacrificing yourself and giving your opponents points. Use the Skeddadle Ball for both offense and defense and Plink can turn the tide in a Knockout round.

Plink can’t teleport when he has the ball, but he is a quick enough character that he can be an effective ball carrier in this mode if no one else is available. He excels, however, at defense. He can easily get around enemies and prevent them from scoring with his teleportation ability. Use him to disorient your opponents and distract while the rest of your team carries the ball to the goal and you’ll be golden.

Plink is arguably your best choice for a round of Mega Rocket. He can hold his own on offense while still staying alive and can move around the map quickly with his Skeddadle Ball. The Skeddadle Ball can be especially great when your opponents are bunching up in the missile zone and you want to both get there quick and cause some good damage.

Plink can do just fine in a round of Treasure Hunt, but the mode doesn’t play into all his strengths the most effectively. Holding the treasure chest eliminates his Skeddadle Ball ability, and matches move around so chaotically, it can be hard to keep up and teleport effectively. If you can, though, he can be great to use as a body guard. Teleportation, sadly, doesn’t really help with picking up coins, though, and might disorient you more than anyone else.

Nevertheless, Plink is an exceptional character to play as. If you find yourself dying left and right, Plink is a great character to switch to. He is a resilient little child and has got a great arsenal to boot.