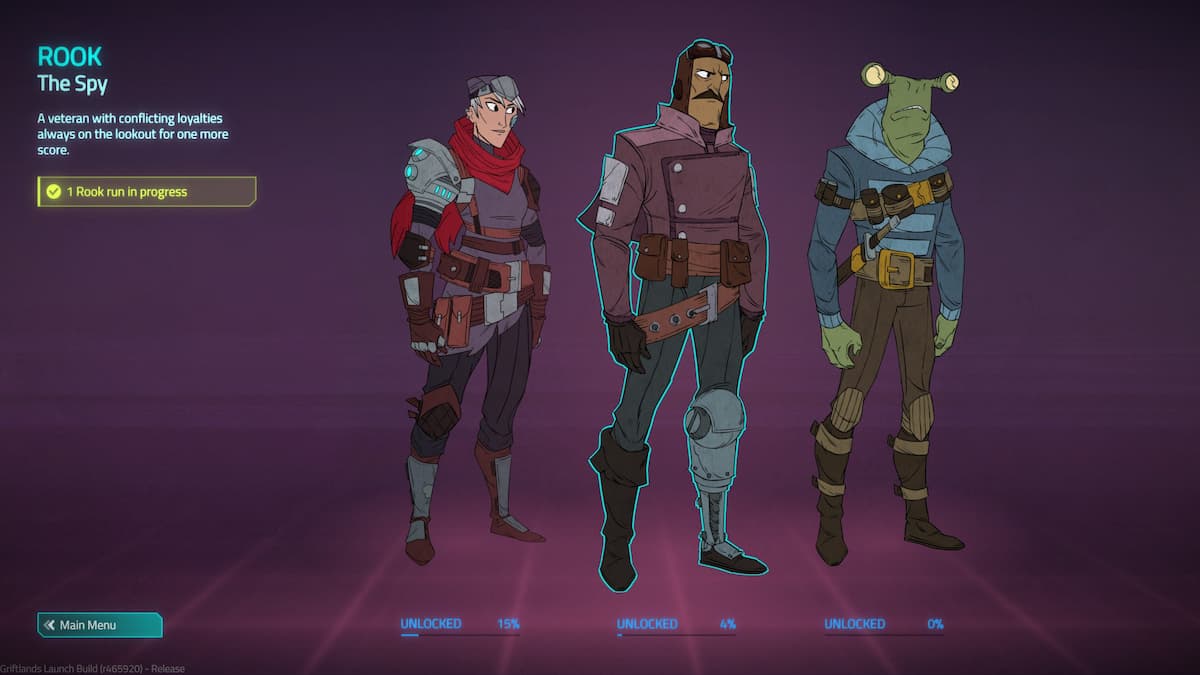 When you first start Klei Entertainment’s Griftlands, you can only play as Sal. The deadly bounty hunter is an excellent starting character. She uses a system of combos and finishers to take down foes with massive attacks in combat and does a great job at slow-rolling negotiations as you build up your damage abilities. However, she’s not the only character available. Like most modern roguelike deck-builders, you can unlock two extra that switch up gameplay in various ways.

The first extra character you’ll unlock is Rook. Unlike Sal, he uses ranged attacks in battle. Because he’s using future guns, he has a charge meter that lets you build up damage over time. It’s a fun mechanic that lets you structure your deck around either keeping your charge meter high or constantly emptying. For negotiations, Rook’s special ability is that he has a coin he can flip that gives him different powers based on which side the coin lands on. It’s a gamble, but you can get abilities that rig the coin, giving you a massive advantage.

Fortunately, unlocking Rook isn’t too difficult. All you need to do is make it through the first night of Sal’s quest. If you play things safely on your first playthrough, you’ll likely unlock Rook right away, which gives you the option of learning either character out of the gate.

Unlocking Smith is very similar. This time, you need to make it through the first night of Rook’s quest. So, you can unlock both characters in less than an hour if you really want to. Smith is an interesting character that we’d probably recommend you wait a little while to try out, even if you unlock him early.

This is because Smith’s abilities tend to have more interaction with each other and ask you to hurt yourself to activate them. It’s better to learn the basics with Sal and Rook before trying out Smith. As seemingly the most complicated of the three characters, you don’t want to overwhelm yourself before you’re ready.

That said, in the right hands, Smith can be absolutely deadly. His ability to inflict Trauma on enemies alongside his regeneration make him a formidable fighter. Plus, he’s well-connected in the world, making negotiations a bit easier once you know what you’re doing.

Of course, all three characters are completely viable. None of them are overpowered compared to the others. You’re free to choose who you want. We recommend playing a few runs with Sal to get your feet under you and then try out the other two to see who fits your playstyle the best.