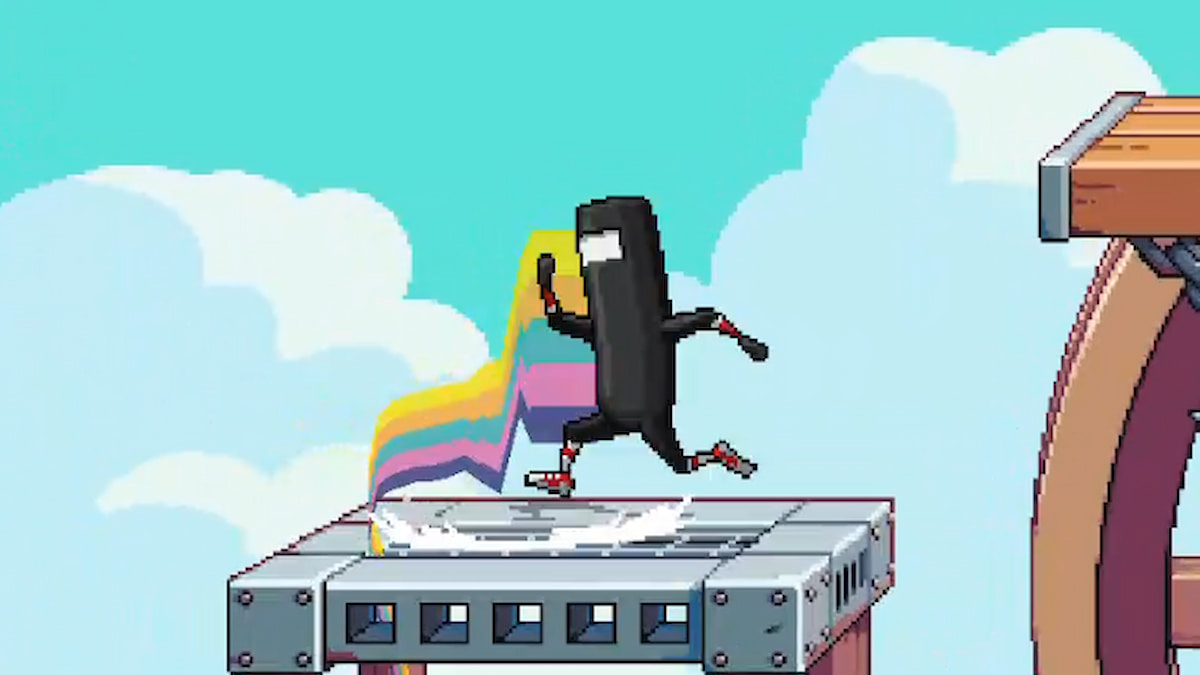 CommanderVideo from the Bit.Trip series is one of the four playable characters in Fraymakers, the new indie crossover fighting game that has entered Early Access on Steam. Much like in the Bit.Trip franchise, CommanderVideo is focused on speed, resulting in Fraymakers giving him a fast-paced and aggressive combat style, making him one of the best fighters in the game.

CommanderVideo excels at the rushdown style, where he constantly stays on top of the enemy and uses his fast attacks to rack up blows to stunlock opponents. The sheer speed of his spikes and juggles, coupled with his incredible mobility in the air, means that CommanderVideo should always be in melee range. His side smash equivalent might be slow, but it’s not needed for victory, as his aerial attacks are just as good at disposing of foes.

In terms of special moves, CommanderVideo’s neutral special is a laser cannon with a slow startup and ending animations. It does however have long-range, can be aimed in four directions, and can strike multiple foes in the same hit. The cannon doesn’t have much knockback damage, but it’s great for forcing the enemy out of a defensive position, as it can be spammed from a safe distance. By comparison, CommanderVideo’s down special isn’t as good, as it turns him into a barrier that deflects projectiles. This reflection effect isn’t significant in the current version of Fraymakers due to how ranged attacks aren’t a major factor in the current build, but that could change in a future update.

CommanderVideo’s rainbow trail-enhanced slide is his best move, thanks to its unconventional hitbox that allows it to bypass many enemy attacks, as well as being able to hit multiple enemies in one motion. The slide should set up lengthy combos of standard hits, leading to an aerial or a spike. CommanderVideo’s spike can also knock an opponent into the stage and the air, setting them up for an aerial KO at high percentages.

One area in which CommanderVideo suffers is his recovery move, as it requires him to pause in midair and for the cannon he is in to aim towards the stage, leaving him vulnerable to spikes and edgeguarding. In addition, the ledge grab detection in Fraymakers is unreliable in the current build, so even a well-aimed cannon shot might still not work. In terms of horizontal recovery, his slide doesn’t cover much distance on its own, and CommanderVideo has likely lost the rainbow trail if he is off the side of the stage. This weakness can be mitigated with assists, such as Captain Viridian or The Bard, but these cannot always be relied upon due to how they’re tied to a meter.

The choice of assist character for CommanderVideo depends on play style. Those worried about his recovery problems should go for Captain Viridian or Kragg, players who want more defensive options should go for Diogenes or The Bard, while those taking a more offensive approach should go for Birthday or Josef, as they are great for setting up aerial KOs.

CommanderVideo’s worst matchup in Fraymers is Orcane, as his ability to teleport and set off traps with puddles can help break up combos and force the player to go on the defensive. Orcane’s vanishing side special is also effective at evading CommanderVideo’s approach options. CommanderVideo’s best matchup in Fraymakers is against Octodad, as his speed is perfect for outmaneuvering the tentacle’s reach, while the laser can be used to force him into a more favorable range. With this information in mind, the aim of the CommanderVideo player should be to hammer the enemy and force them onto the back foot, leading into combos that end with a killing move.