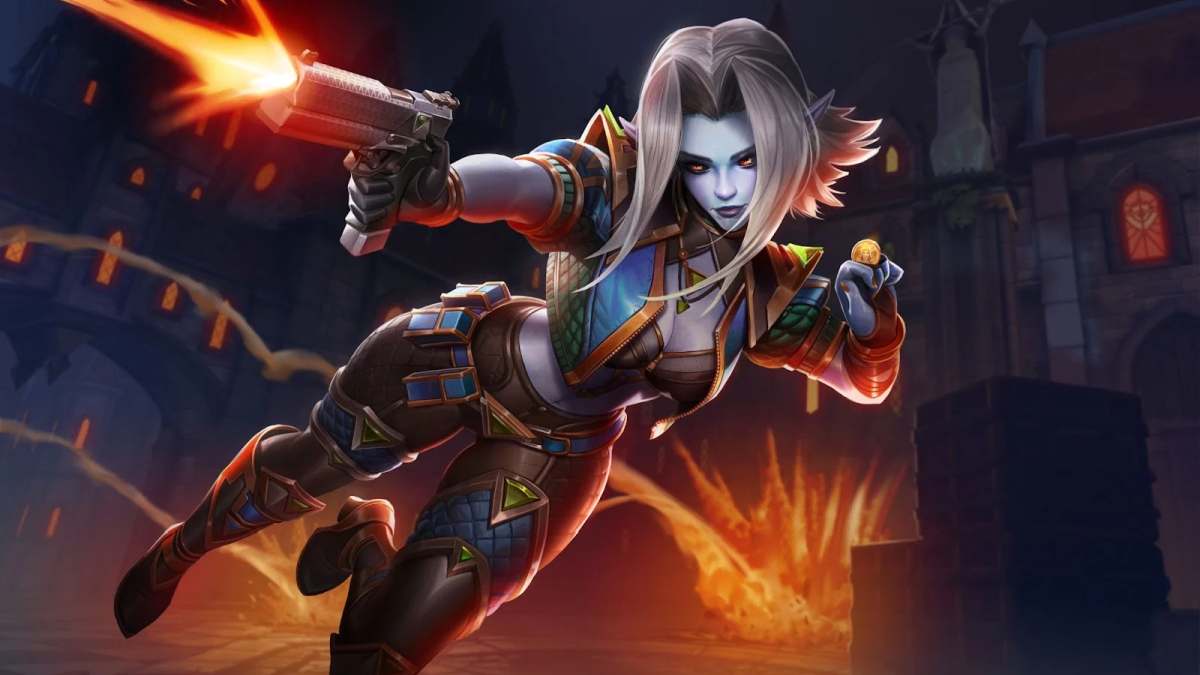 Saati is the newest Paladins damage champion, a trick shooter bounty hunter equipped with a heavy fantasy-styled Deagle, and a bag full of cool tricks. She arrives in Paladins at the start of September in the Trickshot update, which also brings a new Event Pass, new Trials of the Realm, and a Stone Keep map revamp.

Saati is a damage champion in Paladins, which generally means her job is to sit in mid-range and soften enemies trying to claim the objective, while also watching out for flanks and being a general nuisance. She has 2200 health, and her abilities have no cooldowns and use a resource system similar to Koga’s energy bar instead. She has 8 pips that recharge over time, and each of her abilities consumes a number of pips, allowing her to double up on a chosen ability at any given time.

To do her job, Saati is armed with a bulky Hand Cannon that deals 525 damage every half-second and has a 7-round magazine. It has a 1.5 headshot multiplier, and its damage dropoff begins at the 60 unit mark. This gun can melt most characters in Paladins in under two seconds, and no cover or invisibility works against it, thanks to the rest of Saati’s kit.

The first thing to note about playing Saati in Paladins is that you may be tempted to use Ricochet all the time, and that would be a bad idea. Ricochet is very flashy and fun to use, but even with perfect hits, it deals less overall damage than simply shooting enemy champions with your crystal-powered Deagle. This ability is best saved up for when you really need to hit opponents cowering in cover. Dead Ringer is usually a better investment of your pips since it punishes opponents when they fight it, and also when they ignore it.

Unlike most Paladins champions, Saati comes with great flexibility built into her base kit. Every ability in her arsenal can do multiple things. She can reposition herself, go invisible, knock enemies back (or up), set up cover and turrets, deal damage around corners, blow stuff up, reveal enemies in cover or in stealth, and much more. For that reason, it pays off to take base Armor and Weapon cards and play reactively, rather than try to build up a specific ability or tactic.

Since the pip system allows Saati to repeatedly spam the same ability, you could also build a few extra decks for her that focus on specific parts of her kit.