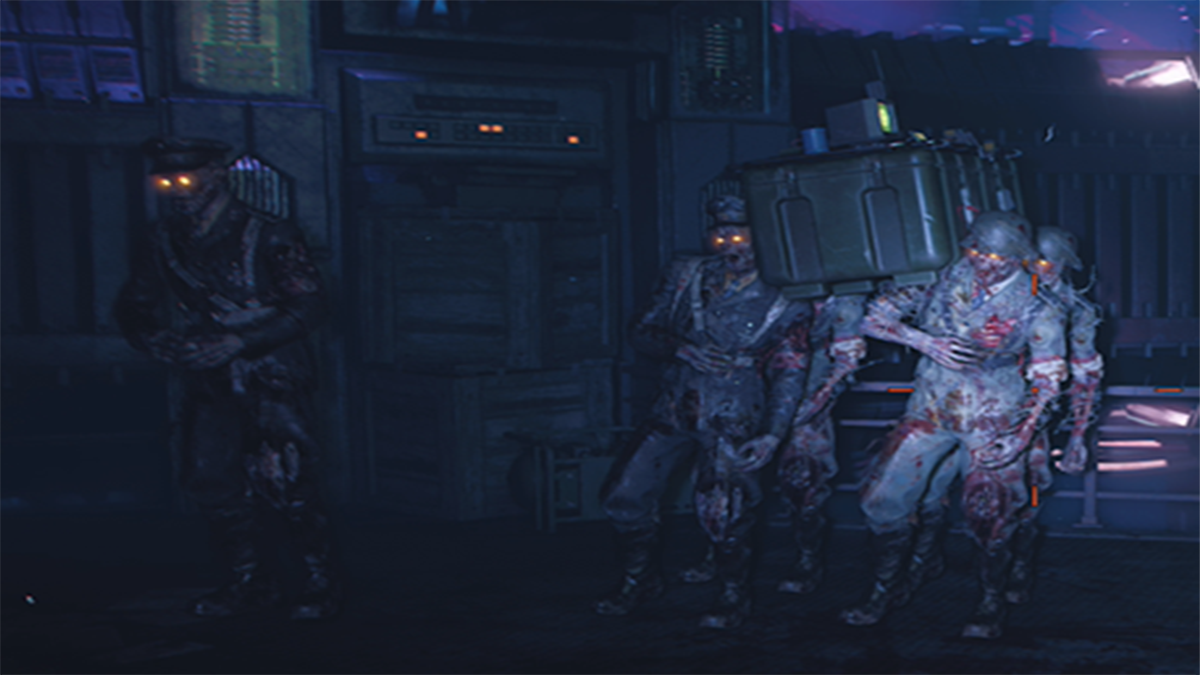 While Zombies mode in Call of Duty is well-known for being complicated, it also has quite a history of not taking itself too seriously with Easter eggs. In Die Maschine, the first zombie map for Black Ops Cold War, developer Treyarch included a reference to the Dancing Pallbearers, a group from Ghana that dances with coffins to inspire celebration of the person inside who passed away. Finding this Easter egg is both humorous and helpful to you. It gives you a substantial break from fleeing zombies and will reward you with valuable items. Here is how to find the coffin dance Easter egg in Die Maschine.

As is the case with most zombie maps, you will need to turn on the power to do most things in the level.

Now that the Pack-a-Punch machine is activated, there will be five different white orbs you need to shoot in the Particle Accelerator room (the one with the machine in it). Each sphere will give off a buzzing sound and can be activated with any gun. Your weapon does not need to be packed, and you do not need to be in the Dark Aether dimension to do it.

Below are the locations of each orb. You can shoot these in any order, so if you are having issues with one, feel free to move on to the next and come back.

From the power room, turn left and walk towards the command center at the end. Look into the gap between computers where a chair is on its side. The orb is there.

From the first orb, turn around and go down the stairs. Stick to the wall on the right and you will notice an orb through the grating at the end as you get close to the opposite set of stairs. You cannot shoot through this grate, so you will need to crouch and look under to get it.

The third orb is more challenging to see. Go underneath the platform the Pack-a-Punch machine is on and you will find a barrier that zombies come through. In the top left corner of this window is the orb. If the barrier is broken, it is easier to see it; otherwise, you will see only its shine in between the wood.

The fourth orb will require you to go to the platform that the arsenal is on, the arsenal being the panel that lets you upgrade your armor and weapons. You will need to jump over the railing opposite of the arsenal and land on the machinery in the image below.

Once you’re on the machinery, turn to the dark corner and look through the junk to find the orb glowing in the darkness.

The fifth and final orb is floating above the hole in the wall near the entrance to the Weapons Lab. Jump onto the command center opposite of one of the buttons you pressed earlier to summon the anomaly, and you should easily see it.

Upon shooting the final orb, you and anyone in the game will be teleported to the Dark Aether dimension in front of the Pack-a-Punch machine. All of the zombies you will see in front of you will be dancing, and four of them will have a crate on their soldiers. During this time, zombies will not attack you, so feel free to join the party and dance.

Eventually, the pallbearers will make their way to the middle of the stairway path. At this point, you will be teleported back to the regular dimension, and the crate they were dancing with will be left behind. Open the box and a bunch of useful items will pop out, including a weapon, free Juggernog, cymbal monkey, and parts for the arsenal. Pay attention to the screen with the smiley face on the crate. Whatever color it is when you open it decides the rarity of items you get. Aim for orange and you can get a legendary weapon among the rewards.