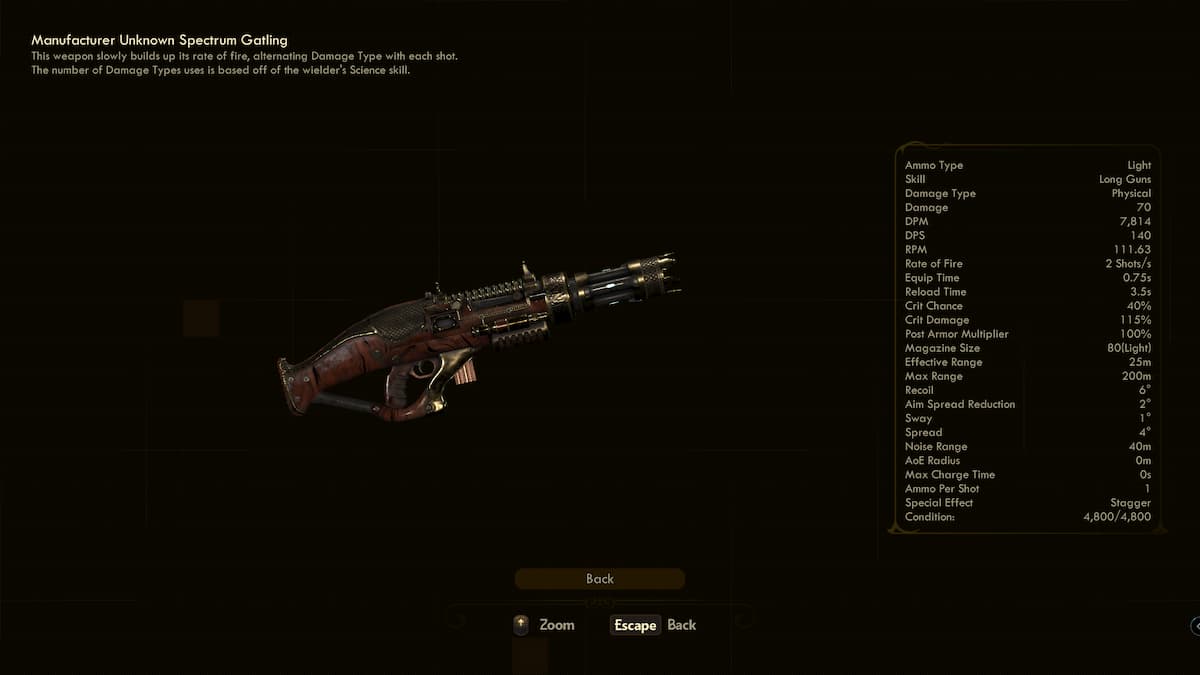 The Outer Worlds: Murder on Eridanos includes tons of new items and weapons for players to find. Some of the most fun to use are the new science weapons. In total, there are three for you to unlock. The first we came across in our playthrough was the Spectrum Gatling fun. The heavy weapon is powered by vodka, and to unlock it, you’ll need to find all the Spectrum vodka bottles. If you need some help, check out our guide below to get it knocked out quickly.

How to start At the End of the Spectrum

To acquire the new science weapon, you’ll need to finish the fetch quest called At the End of the Spectrum. This quest is found in Purpleberry Orchards in the RR&DD building. After helping Dr. Blossom deal with the lab workers she’s infected, you’ll be let into her main research center.

There you’ll notice a big computer terminal, which is connected to the Spectrum Gatling gun. When you interact with the terminal, make sure to select the “view lab notes’ option to unlock the quest to get the gun. From there, you just need to find the eight different types of Spectrum vodka. Here are all eight.

Now that you have the quest, it’s time to run around the orchard and find all eight bottles to get the gun.

The first four vodka bottles are easy to find. We’ve found multiple versions of them while questing throughout the island. All you need to do is check the bodies of your enemies, and you’ll get these quickly. We’d recommend checking in the RR&DD labs, as you’ll find most of these four down there. From there, it’s just a matter of searching the recently murdered all over the orchard.

Spectrum Blue can be found very early in the hedge maze in the middle of the island. From the entrance, just head to your left until you see the engineer and look around for the table. Check the screenshot above. It shouldn’t be too tough to find.

You’ve likely already seen the Spectrum Black bottle before without noticing. While tracing Helen Halcyon’s steps in the orchard, you probably came across the picnic setting you can see above. The Black bottle is waiting for you there alongside a Spectrum Red if you haven’t found it elsewhere.

Spectrum Indigo is a bit more hidden than the other bottles. You need to head west of the RR&DD building to the Groundskeeper’s Shack. Inside, you’ll notice the Indigo bottle tucked in the corner behind some boxes.

The final bottle is located back inside Dr. Blossom’s locked office in the RR&DD building. To get inside, you either take her keycard from the lab room or pick the lock if you have high enough skill. No matter how you get in, the bottle is waiting for you on a table overlooking the facility.

Once you have all eight bottles, you just have to head back to the computer and open the case. Then, the gun is yours. Of course, to take full advantage of it, you’ll need a high Science skill. But, if you’ve speced that way, you’ll be ready to take on the galaxy with your new high-powered Gatling gun.