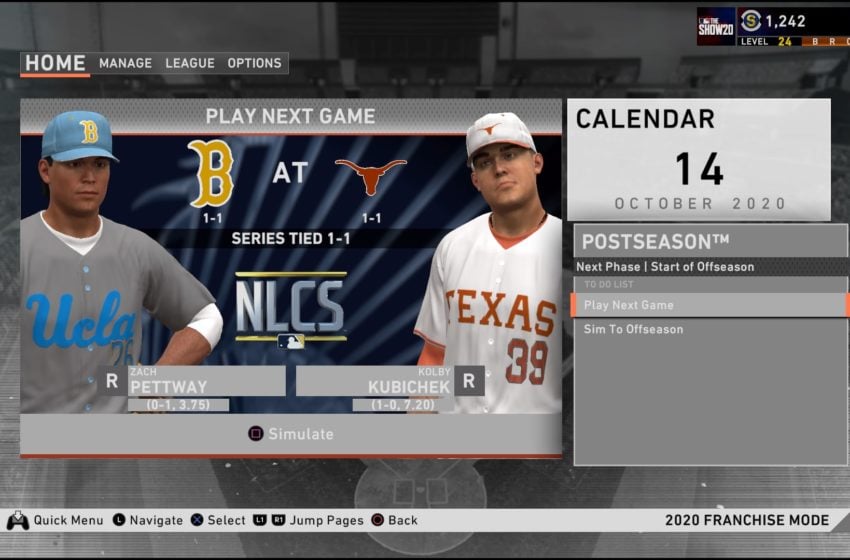 Thanks to the small but creative user community for MLB: The Show 20, players can now be able to transform the professional baseball game into something of a college experience. As it’s not offered by the developer, Sony San Diego, it will take some time to go through the team’s customization process. However, once the process is done, you’ll have yourself the first (unofficial) college baseball game since EA’s MVP 07: NCAA Baseball.

First off, it should be mentioned you will not have to worry about creating a roster whole of every single NCAA baseball player. Instead, you will want to go to the game’s community vault and search for a file named “30 Team College Rosters” by a user named “o0oLSUTigerso0o.” It should be one of the first to appear, as it is one of the game’s most downloaded files.

After you load the rosters into your game, go ahead into Franchise Mode, and to where you choose teams. Now, in this roster file, each team has one college’s particular set of players. So, you’ll want to click R1, in this menu, to customize each MLB team.

Which MLB teams have each school’s players?

Below is the exact list of which school’s players belong to each MLB team, broken down by division.

How to customize each team

After pressing R1 on each team, and knowing who they should be, click on the ‘Create New Custom Team’ option. From here, you can personalize each school to your liking, including the uniforms. Thanks to the logo vault, you can search and download each school’s logo and place them onto the jerseys. After each team is customized, it will ask you to save each, and you will want to do so, to use them for possible future franchises you create.

After an hour or so, you should have the 30 best teams in college baseball playable in Franchise Mode. From what we have seen, each player’s rating is incredibly detailed and accurate to how they perform in actual games. It should be noted that it is likely MLB: The Show 20 will be compatible with PlayStation 5, so you can take this experience to the next-generation, too, at least in theory.