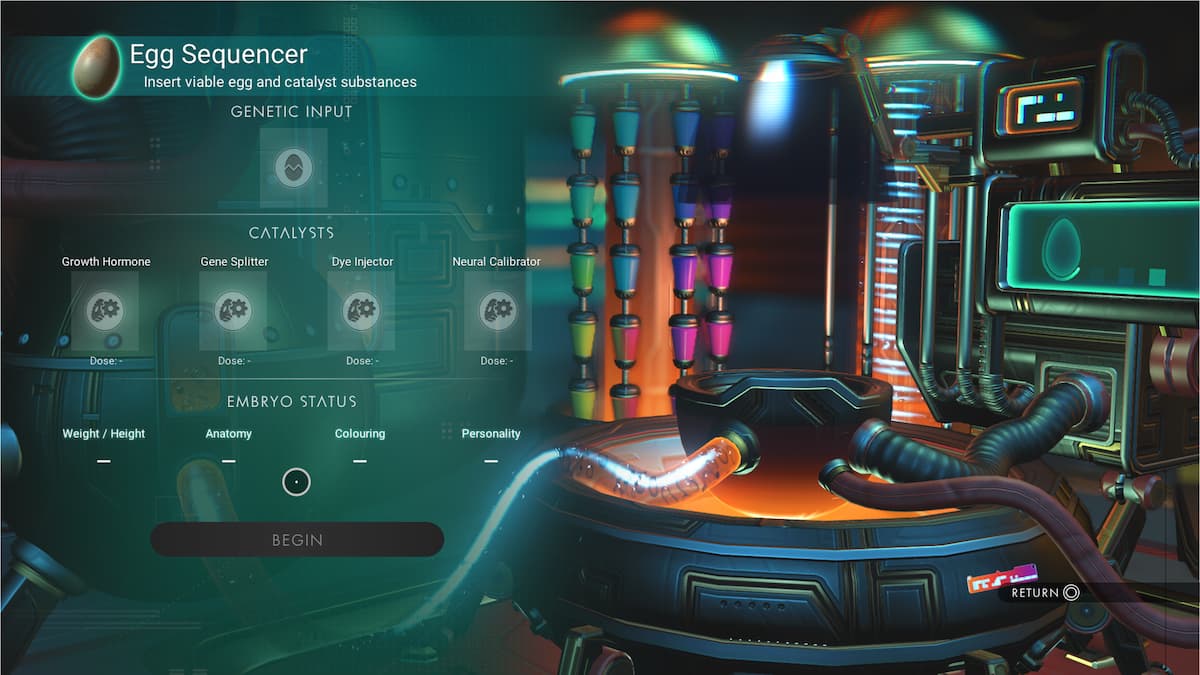 Despite being nearly six years old now, No Man’s Sky gets great support and new updates from the developers over at Hello Games. Companions update saw the introduction of animal companions to keep you company as you travel across the cosmos. Eventually, the companion creature might lay an egg, which is where players get the chance to play God with the animal’s offspring by taking their egg to the Egg Sequencer.

What is the Egg Sequencer?

The Egg Sequencer is found within the Anomaly, the multiplayer hub, along with several NPCs and shops. Eggs that are ready to hatch, meaning that they were laid by the companion creature at least 24 hours earlier, can be put into the Egg Sequencer, allowing players to edit four aspects of the offspring inside. These are:

Simply put the egg you wish to sequence onto the center of the Egg Sequencer and select a material for the different aspects you wish to change. You have to use at least one of them before you activate the sequencer.

No Man’s Sky is all about experimenting, and the Egg Sequencer is one of the best examples of this. Different materials will impact different creature types differently or to varying degrees. For example, a larger creature will need more material to change its colors, while a creature that starts aggressive will need more material to make them gentle. This makes it difficult to prescribe a specific list of materials needed to get a desired outcome.

The good news is that each subsequent generation of companions will shift more along that scale. It might take some time to get the exact companion you want, but that is part of the joy of the game. For the Dye Injector and Gene Splitter, the Egg Sequencer won’t tell you the outcome ahead of time. For the other two aspects, it will give you a heads-up as to what changes you are making by saying things like “Size Increasing/Decreasing” or “Devotion Increasing/Decreasing”.

Putting more materials into the Egg Sequencer will result in a greater change in the results up to a certain point. However, if you put too much of a single material into one of the slots, it will warn you that you will overdose the egg inside. This means that you will create something completely random from the mutation, with unpredictable results. Usually, this happens from putting a full stack of 999 of a material into the slot, but rarer materials can do it at lower levels. It isn’t recommended if you’re going for a specific build, but it can be a fun experiment to run.

Finally, it is worth mentioning that you can only put one material into each aspect each time you use the Egg Sequencer, but you can put the egg through the process as many times as you want before you hatch it, so you can play around with it as much as you like before bringing your genetically-enhanced companion into the world.