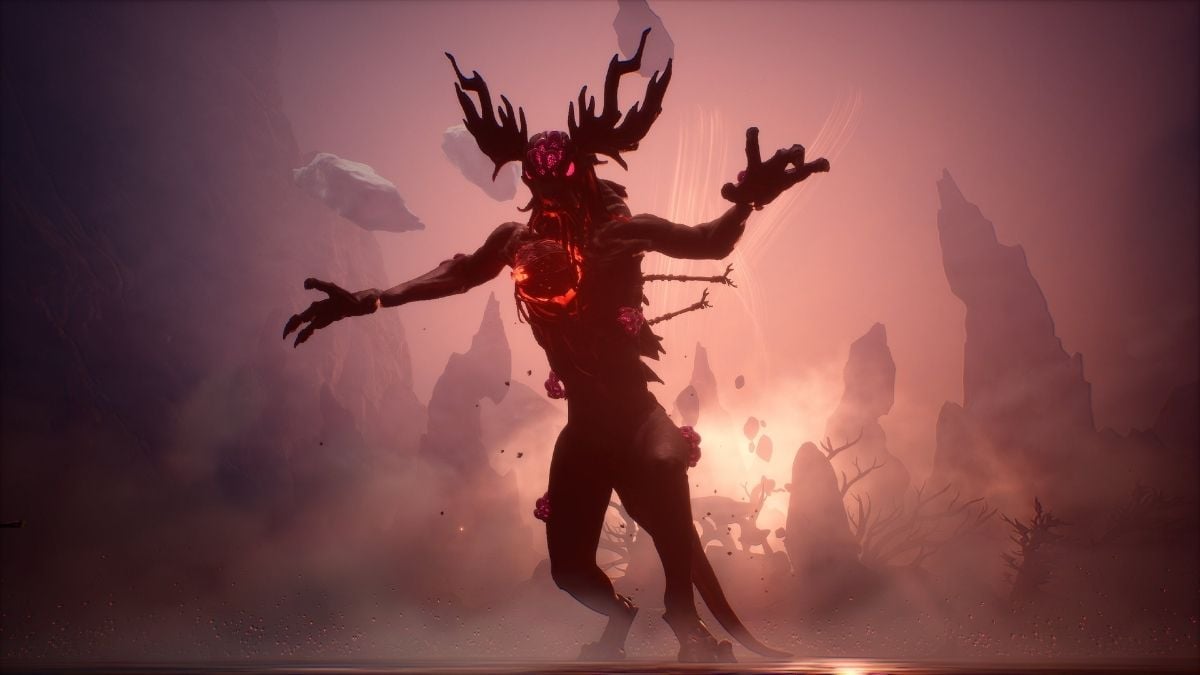 You’ve finally reached the end of the game after hours upon hours of hard work and puzzle-solving. You reach the top of the snow-covered mountain to see Toshi. He summons a monstrous being known as the Rot God. Now you must take on the final boss. Here are some tips to beat it.

This boss fight can be broken up into five stages. During stage one, you will be face to face with the massive beast. During this stage of the fight, the boss has only a few attacks. It will attempt to grab you with its right arm, smack you with its left arm, and slam down on the battlefield to create a shockwave. It also has a ranged attack it uses with its right arm that is easily avoided by jumping or dodging to the left. It is easiest to avoid the attacks while standing under the boss rather than in front of it.

Across the boss’ body are glowing masses. Shoot these with your bow to weaken it and initiate stage two. Each mass takes two fully charged arrows to destroy. We recommend using the Focus ability to slow down time to make the shots easier. After enough of these masses are destroyed, a cutscene will commence and you will be teleported to a new area.

This new area is vacant. The only thing that’s here is a gate. Toshi will appear and spawn enemies into the area. These enemies are smaller and easy to deal with. Once they are all destroyed, dash through the gate to enter another vacant area. More enemies and a mini-boss will spawn. Take care of these new enemies and a Forest Tear will appear that contains some of your Rot Spirits. Destroy it and they will be free. You will now have access to one Rot Action. Dash through the gate and you will appear back in the boss arena with the Corrupt Rot God.

Stage three is exactly like stage one, with one major difference. The boss can now fire lasers. Occasionally, the boss will jump back, outside of the arena and fire a laser that sweeps across the battlefield. Jump over this or dodge through it so you don’t get hurt. The rest of this stage is the same as the first stage. Take out more of the masses across the boss’ body until you are teleported to another new area.

After being teleported again, you will be in a large jumping puzzle. Scale the rocks and use the occasional lotus flower to reach the top. Once there, you will find another Forest Tear that contains the rest of your Rot Spirits. Destroy it and you will be back to full strength. Now it is time to finish the boss off.

During the last stage, the boss will be less aggressive with its hands and use more shockwave and laser attacks. Instead of focusing on the boss, focus on the small minions it summons to build up your Rot Energy. After some time passes, the boss will charge up energy. A prompt will appear on your screen to use your Rot Spirits to attack the boss. They will fly out and wrap around a spear sticking out of the boss’ back. The Rot Spirits will then proceed to rip the spear out, damaging the boss.

Keep fighting the smaller enemies to keep your Rot Energy up and wait for the boss to charge up again. The boss will do this until all of the spears on its back are removed. Once they are all gone, the boss will be defeated. It will fall over and you will see that you can perform one final Rot Action. Wrap the Rot Spirits around the flower protruding from the boss and hit it with an arrow to destroy it.