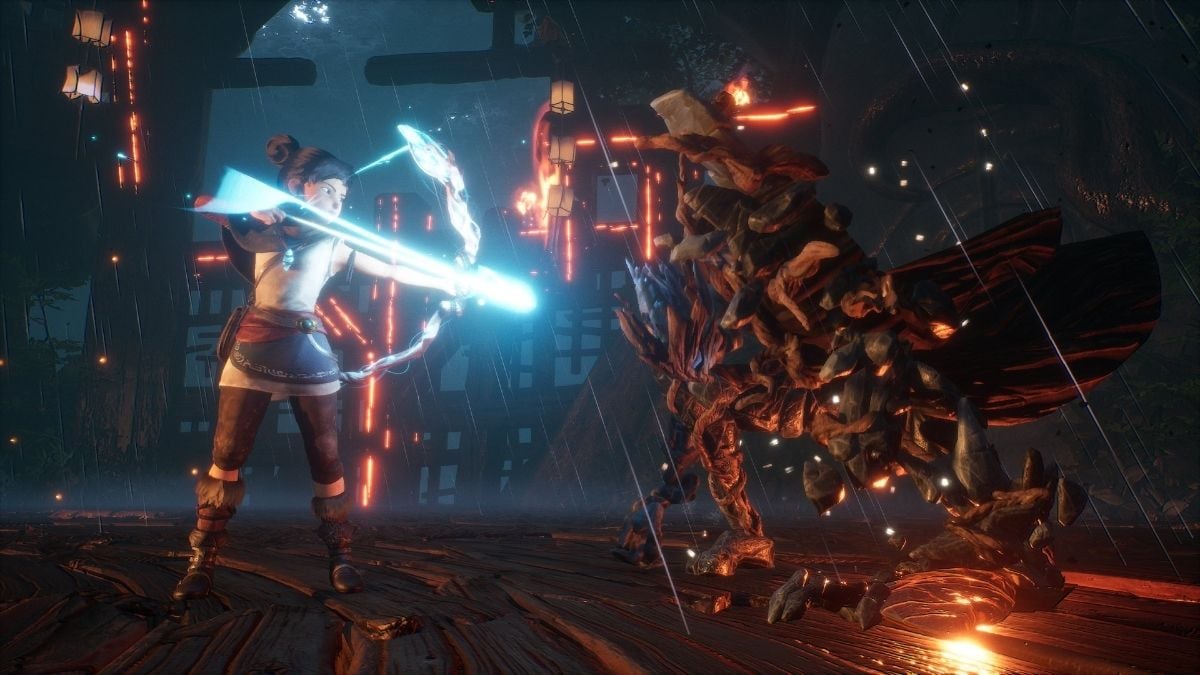 The Corrupt Woodsmith is fast, and when we say fast, we mean it. Besides that, the Woodsmith boss fight is one of the most cinematic fights and one of the most enjoyable in the game (despite its difficulty). The Woodsmith can be extremely hard to defeat, so here are some tips to help you take her out.

The Woodsmith has two phases and the attacks get worse later in the fight. During phase one, the Woodsmith will have three attacks that they do; a swipe, a lunge, and a ground pound. The first to watch out for is the lunge. She will typically start the fight by lunging at you and swinging her hammer. This is easy to dodge with the right timing or double jumping can also prove effective (in most cases we found the double-jumping method to be easier).

The second attack is the swipe. It mainly happens if you stay close to the boss and is easier to avoid than the lunge. The last attack is the ground pound. The Woodsmith will jump into the air and slam the ground. When she makes contact with the floor, an orange ring will expand outward. This can deal pretty good damage and throw you, so be careful.

During phase two, the attacks get a little more intense and the Woodsmith will be much more aggressive. During this phase, the boss’ weapon will be on fire pretty often. The attacks generally stay the same, but the Woodsmith does add a few more and alters one of them. The first of these new attacks is a three-swing combo. Try to avoid shielding through this because it will most likely break your shield. Either parry this attack or dodge.

The second new attack is a weapon throw. The Woodsmith will throw her weapon at you so be prepared to dodge it or shield through it. Lastly, her ground pound has been altered slightly. During this phase of the fight, when the Woodsmith hits the ground, a large laser-like ring will expand like before, only this time it will be multiple rings. Pay attention so you don’t get hit by any of them.

How to defeat the Woodsmith

During the first phase of the fight, the Woodsmith will be tethered to the core in the center of the arena. To cause any damage to her, you will need to throw a bomb at the core. When the bomb explodes, the armor around the core will tear apart and reveal the crystal inside. Shoot the crystal three times with your bow. This will cause the tether to break and the Woodsmith will be stunned. Hit her while you have the chance. After a little while, the Woodsmith will re-tether herself to the core and you will have to repeat the process. Keep doing this until the core is broken and the tether is gone (about half the boss’ health).

During phase two, the tether will be broken and it will be you vs. the Woodsmith. One of the easiest ways to deal damage during this time is to catch the Woodsmith in a Rot Bomb. If you don’t have this upgrade, now would be a great time to have it. It will freeze the Woodsmith in place for a short time to get some hits in.

Whenever you hit the boss with a bomb during phase two, you will see a yellow crystal protrude from her chest. Lay into it with arrows and it will shatter. This deals a lot of damage to the boss and stuns her for a short while allowing you to get some extra hits in. The boss will also periodically reignite her weapons by sticking them in the shattered core. During this time, you can get some free hits with your bow and bombs.