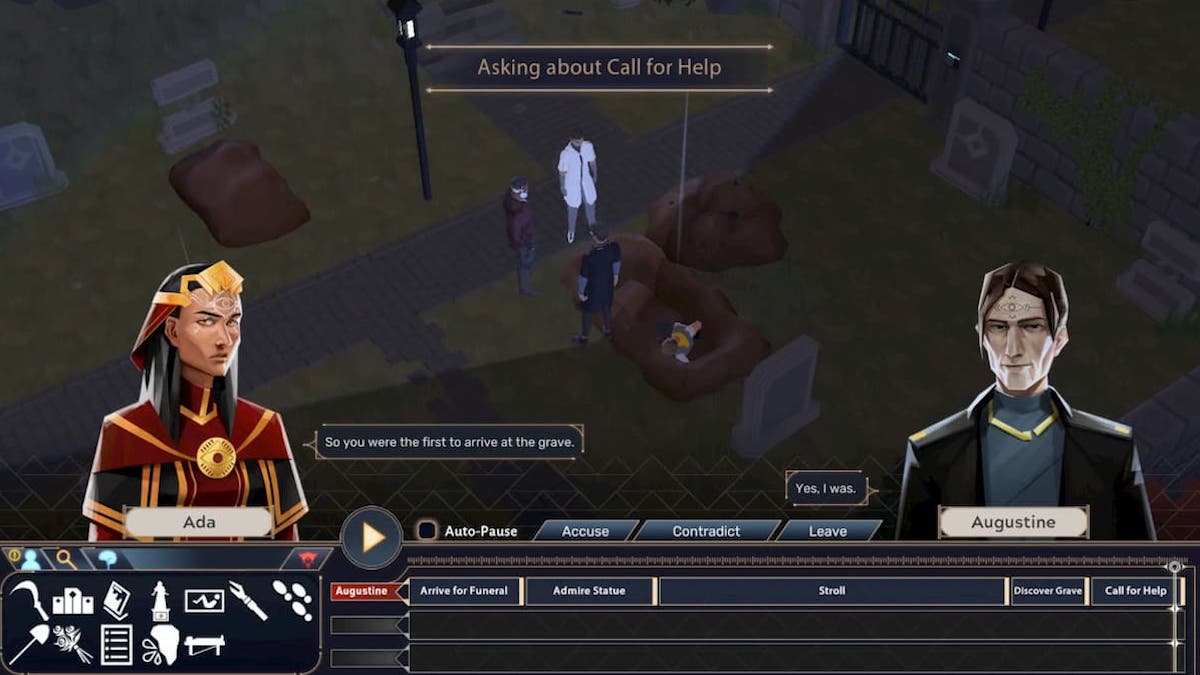 In a shocking coincidence, a second murder occurred not long after your first case. While preparing the body of Mother Miriam, the first victim of the game, for burial, a young scholar named Isaac had his throat slit, his body lying in the grave meant for Mother Miriam. Sister Ada’s pleas for Mother Miriam’s body to be destroyed were unheeded, and it appears that daemonic infection from the body led to this crime. For the Graveyard case, you’ll be talking to Augustine, a scholar who mentored Isaac, Abraham, a grave tender, and Nerissa, an embalmer.

There’s a mortuary to the north of where you start, but let’s save that for last. We’ll go through the graveyard in a counterclockwise fashion head down south through the graveyard, and you’ll spot an unusually distinct Headstone — this is a Noble’s Grave, one that belongs to a once-prominent family that has since been disgraced. Near the grave is a suspicious Sickle, one sharp enough to be the murder weapon.

Keep going down the path; on the left side of the path are some benches, accompanied by the Statue of Saint Walpurga. On the right side of the path is a gravesite, and on it is a mysterious tablet known as an Aether Scanner, seemingly abandoned on the dirt, standing upright. Go into the next section of the graveyard — the rear field where Isaac’s body was found. There is a freshly dug grave where Isaac’s Body remains. We know that his throat was slashed, but unusually, there is also a large scar on his stomach area.

Go up some outdoor steps to the mortuary, but not before spotting an abandoned Surgical Multitool to the right of the stairs. Go through the back entrance of the mortuary, and you’ll see Muddy Footprints — it didn’t rain until after dusk, so someone else must have come into the mortuary late in the day. There is a Shovel on a tool rack in front of you. Go through the doorway, and to your right is Nerissa’s Workstation, which displays the Graveyard Schedule. On the floor is a Bouquet, for some reason. And in the back of the small mortuary is the embalmed body of Mother Miriam; next to it is a Bloody Liver, presumably hers.

Those are the pieces of Physical Evidence we found in our first playthrough, but one more essential piece came about while gathering testimonies.

Talking to three different suspects, all with barely any sort of relationship between them, will be a bit of a tangled mess. Remember that after gathering their initial Testimony, you can switch between their Testimonies on the Timeline. Save yourself the trouble of crossing the graveyard every time you have to talk to someone new. Also keep in mind that you can talk to these three suspects in any order in which you please, not necessarily the order presented to you in this guide.

Father Augustine the scholar seems rather blasé and calm about the brutal killing, but there’s a bit that you can shake out of him. Most of his Testimony involves him taking a leisurely stroll throughout the graveyard, admiring the statue and the Noble’s Grave, despite acknowledging that the family was disavowed by the faith. You’re going to have to cut up that “stroll” segment of his Testimony; he essentially challenges you to prove that he was doing anything else. If you ask him about the Aether Scanner, he’ll admit that it’s his. Contradict his “stroll” with that piece of Physical Evidence, and he’ll crack that he was scanning many of the gravesites for information, leaving the Scanner on a particular grave before searching for Isaac. This will unlock his Disappointment trait as Psychological Evidence.

Abraham the grave tender is instantly combative once you begin speaking to him. He’s on the defense the entire time, so let’s find some evidence that will break down his defenses. First off, Abraham claims that he did not dig the grave for Mother Miriam (and in which Isaac was found in), which is an odd claim, considering that this is literally the dude’s job. You will learn from Nerissa that she gave Abraham direct orders to do so. He’ll fess up to the lie, and you’ll reveal his Integrity trait. He will also claim that as he was digging the grave, he took a break. However, Nerissa claims that Isaac left the mortuary from the back; Isaac claims that he did not see Isaac or anyone else come out of the mortuary, and he stands by this, so this is a conflict — one of them is lying.

But Abraham’s lies continue — after digging the grave and reporting to Nerissa, Abraham allegedly came out of the front entrance of the mortuary and walked to the benches. However, after you catch Augustine lying about his scanning, he’ll tell you that he saw Abraham come out of the rear field rather than from the front entrance. Point this out, and Abraham will admit his lie, and you’ll see his Last Scion trait for Psychological Evidence. Abraham also claims that he was doing nothing but sitting on a bench before the body was found, but point out the Sickle to him and he’ll admit that he was tending to the Noble’s Grave of us disgraced family, showing his Grief.

All three of these characters are oddball, but Nerissa the embalmer becomes increasingly unsettling to talk to. Despite the morbidness of the entire situation, she seems quite delighted to be talking to you, an exorcist. First, you should talk to her about some pieces of evidence: there’s the Surgical Multitool that you found, and Isaac’s body. She’ll dig through his body to find a Strange Liver, a new piece of Physical Evidence. It appears to have gone through some embalming process, which seems impossible. Continue interviewing her, and some facts will come to light.

Nerissa will claim that all of Mother Miriam’s organs are still intact; point out the Bloody Liver that you found, and she’ll cave and claim that she couldn’t proceed through the entire embalming process as normal due to the loss of her multitool. Scarily enough, this will reveal a Carnivore trait in her mind. At some point, you may realize that Nerissa from the beginning claims that she was alone in the mortuary. This cannot be, as Augustine told you that he sent Isaac to the mortuary immediately upon their arrival. Nerissa will then admit to meeting Isaac, and you’ll find out through her mind her history as a Famine Survivor. She then continues her story about trying to finish the embalming without her multitool, but that doesn’t account for the muddy footprints near the back entrance. She’ll then go back on her Testimony, saying that she went outside while it was raining to look for the multitool, and came back inside — you will then learn from looking into her mind that she is, in fact, a Cannibal.

All three characters are extremely suspicious, all with solid motives. With all of the evidence in front of you, the best thing to do is to just throw all plausible theories in the form of Accusations and see what sticks — there is no harm done for any theories that fall flat.