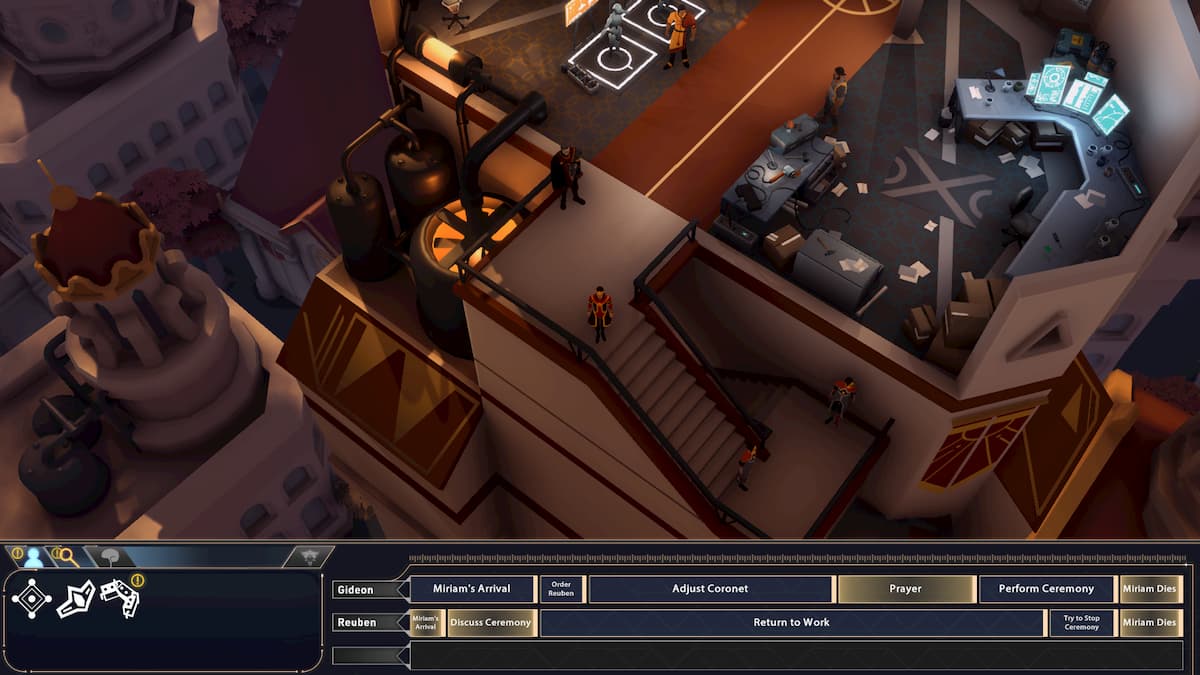 The first case of digital exorcism mystery game Lucifer Within Us depicts an explosive murder, one with a sibling rivalry in the heart of it. A prolific priestess named Mother Miriam was violently killed during what is called a Consecration Ceremony, in what appears to have been an accident. The two brothers tasked with overseeing the ceremony, Gideon and Reuben, are the prime suspects, and each would have plausible reasons to sabotage the ceremony and upend his brother’s career. Here’s how to navigate the Two Brothers case.

Start exploring the left side of the workshop; in Gideon’s workstation, you’ll already find some key pieces of Physical Evidence: instructions for the Consecration Ceremony and the Coronet Limiter. Note that the Limiter is in “pristine condition.”

Make your way to the Consecration Chamber, the spot where the murder took place. There is a Control Panel that resembles an organ — note that the aether output values are recorded to indicate that the ceremony was carried out beyond safe levels. In the chamber itself, you can find the gruesome remains of Mother Miriam’s body. There are actually two pieces of Physical Evidence in here: the body itself and the Coronet remains. This headpiece is supposed to have three components according to the blueprint, but there is no trace of the Limiter, which you found earlier. And before you leave the chamber, don’t forget to click on an essential piece of evidence: the Door Button. This will let you know that the chamber was opened twice around the time of the crime.

On the right side of the workshop is Reuben’s workspace, which doesn’t have too many important pieces of evidence that pertain to the case, but it is worth checking out if you want to find all Physical Evidence for an achievement. Observe Reuben’s Workstation to find the Coronet Blueprints and the Spear Blueprints. The former relay the info that the Coronet requires an Amplifier, a Casing, and a Limited; the latter won’t help you too much with this specific case, but it may become relevant later in the game.

Talking to Gideon, the younger brother and the cybertechnician in charge of the ceremony, can be a hassle — the man is full of himself. But his arrogance may be his undoing, as you interrogate him for his side of events.

Gideon will claim that the Aether output for the ceremony was “within safe ranges.” You know from observing the Control Panel that this is patently false. Contradict him with that piece of Physical Evidence to uncover his lie and unlock his Narcissist trait as Psychological Evidence. Gideon will also claim that he was alone in greeting Mother Miriam. After you speak to Reuben, you will realize that this was not actually the case. Use Reuben’s testimony against Gideon to uncover his Skeptic trait.

Reuben is softer-spoken, but he certainly doesn’t hide his disdain for his brother. However, there are some holes in his Testimony.

While Reuben does confirm that he was present upon Mother Miriam’s entrance, he claims that he went straight back to work right after. However, Gideon contradicts this — Reuben, in fact, actually took Mother Miriam to the Consecration Chamber before heading back to his workspace. Uncovering this unlocks his Believer trait. The last piece of Psychological Evidence is essential — Reuben will claim that he was still at his workspace before getting a “bad feeling” and attempting to stop Gideon from continuing the ceremony. However, the Door Button indicates that the door was opened a second time; Reuben will suddenly recall that he, in fact, opened the door again during the ceremony, while Gideon and Mother Miriam were praying with their eyes closed; this gets you the Envy Psychological Evidence.

With all of this now cleared up, mix and match pieces of evidence and look for opportunities where the murder could have taken place. Make all of the accusations that seem plausible to you.