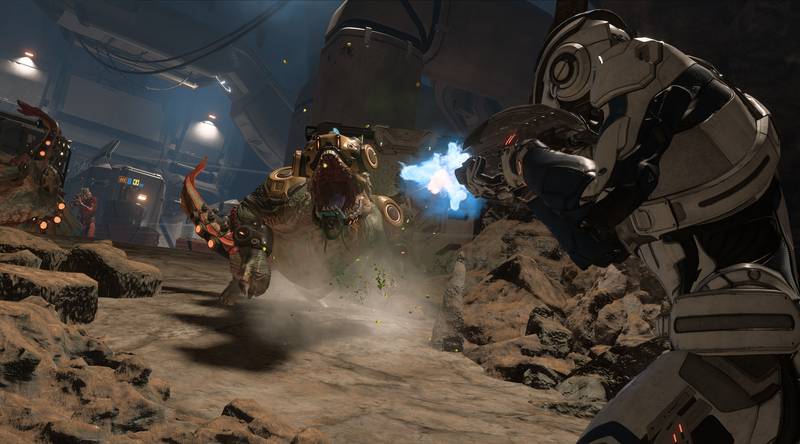 After checking out Nexus, Ryder with this teammates head towards finding another habitat in this ship Tempest. The next objective is to land on Pytheas to find the planet is habitual or not. This is a long mission with a lot of dialog and new characters. The aim is to clear the planet’s radiation to establish an outpost.

After landing there are two main objectives. First is to locate the control building, and second to clear the atmospheric radiation. So first move ahead first to find the control building. The door is code lock, to unlock it you will need a code lock-key. It is located on the left side, in a cabin marked as S7. It is visible on the left which has an open entrance on side. Enter it and on the the left table, on the right side is the key. Press E to examine.

Next objective is to restore the power to Site 1 to make the door working. Head towards the next marker and unlock the door. Move further inside and you will find a power relay station. Investigate the area, and head towards the relay tower with a locked door. Just ahead, there is another facility IT3 and talk to Clancy. The next objective is to Activate the generators in the area along with power pylons. There are two in the area.

Once the power is back, a horde of alien Kett will attack. Take them down and then reactivate the power relay station. Finally go back to Clancy’s area for the next cut scene. The next objective is scanning the containers around to locate a vehicle. Go outside and scan a huge container on the left of Site 1.

To unlock the container, you have to go towards the Forward station. It is also your fast travel point. Next get back to the nomad container and unlock it for the ride. Get in Nomad and head towards the next marker to investigate the strange signal.

Once you reach the location, exit Nomad and access the Alien Device Interface. Next, you will need to locate the glyph for scanning, and it is on the top side of the tower. Get back to the downside to access the interface once again. Finally at the end fight with a few alien drones and bots.

After a cut scene, the next objective is to activate 3 Remnant Monoliths. Peebee will give you navigation points use them to locate the Remnants. You can talk for more information on the alien tech and conditions around. Follow Peebee’s navigation to the structures. This will be long driving missions, as you need to reach to different location and climb up the structures to scan the glyph. This will allow you to decrypt the alien Remnant. Also the structures are surrounded by aliens, so first you need to take them down first.

Some will require glyphs for activation that you can locate through your scanner on the top of pillars around. you have to fill the grid the solve the puzzle, later you can use the Remnant decryption key also. For the next monolith you need to destroy the kett base in the path. Head towards the Kett Research Center and clear all the aliens in the vicinity. The objective is to locate the disable the generator that is powering the shield blocking access to monolith. It is located on the top side of the area, you can use the scanner to locate it. Get back to the main entrance and stop the shield for the next cut scene.

You can explore this base for items, or you can go towards the monolith ahead. Find the glyphs first and then use it on the pillar outside. After accessing the interface of last you will find the final one emerges from the lake. There will be a few kept in the path, take them down first, finally follow Peebee at the entrance to check the vault.

The next objective is to explore the vault. Take the interface on the left side. Next follow the conduit ahead, and scan the area. Access the door ahead with Peebee. Go towards the next marker on the right side, jump ahead, and don’t jump in the liquid.

Keep moving ahead inside and deal with another group of Remnant. Take them out and keep following the path ahead. Later you need to activate two consoles in the vault, and in the next room you will find the broken conduit. Interact with the console to fix the Ferrofluid leak. Ahead you will reach in a big room with plants around. find the interface that will allow you to draw pillars from ground. Activate them and pass ahead shooting assemblers in the path.

Finally you have to locate a final console that will create bridges ahead. Cross it and take the door to find the Pathfinder team in the center of the vault. You will also see a final console that will trigger atmospheric processor. Use the nav points to investigate ahead. There will be a custscene when ryder enters into the door. Peebee will locate an active vault and next is to establish outpost as the atmosphere is clear.

Ahead for further advancement it is necessary to establish an outpost. There will be aliens around, so you need to take them down also. Reach the marked spot first and kill all the aliens around. there will be constant ships coming in, finally Drack will make appearance. Finally after some cut scene talk to Tann at the Nexus HQ.