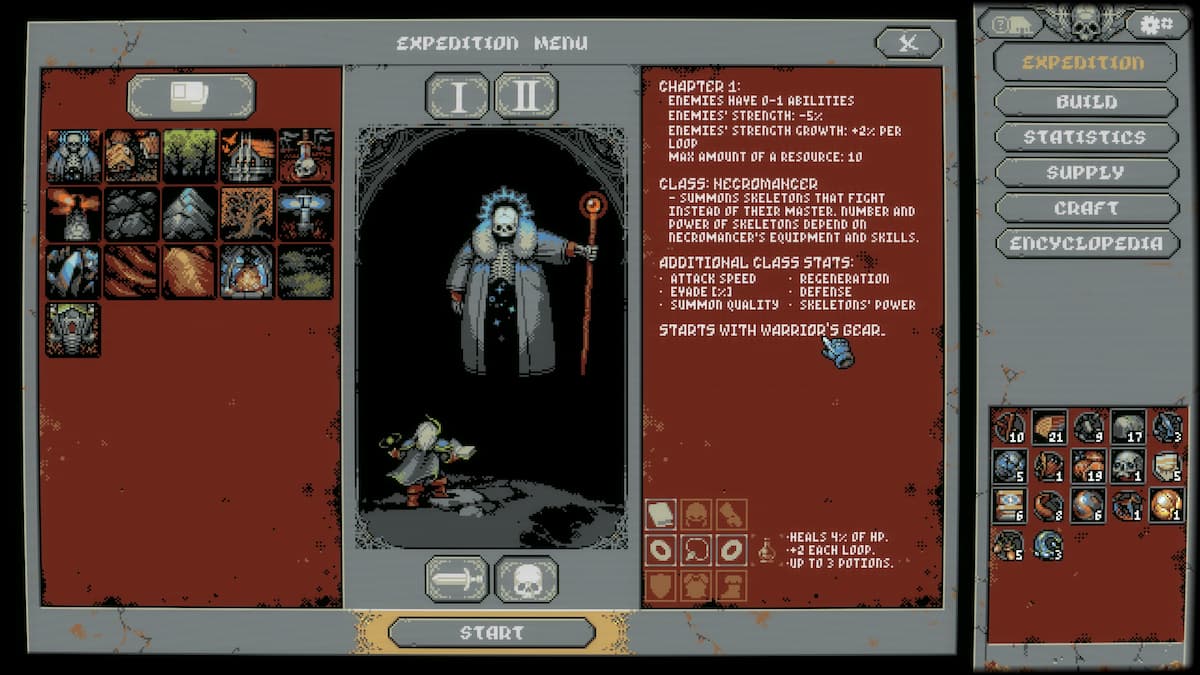 Loop Hero has three character classes for you to choose between. While everyone starts as a warrior, you can quickly work your way toward either the rogue or necromancer. For our money, you can’t go wrong with the necromancer. They use their ability to raise the dead to make them incredibly survivable and deadly when built correctly.

Obviously, there are several ways to go about making the necromancer of your dreams. And it’s incredibly important to stay flexible because of how random Loop Hero can be. However, when you’re looking at gear, there’s a general rule of thumb you should follow. The most important stat to look for Skeleton Level. After that, it’s important to add to your Max Skeletons and then up your Skeleton Quality.

On top of your general skill distribution, you want to unlock thickets and forests as quickly as possible. These serve two important purposes. The first is that they will increase your attack speed. For necromancers, that means faster casting. So, your army of skeletons will get into the battle much quicker. The other is that they start to produce wooden warriors around the loop, which will become important as we move deeper into the build.

For traits, the first two you want to target are Field Practice and Unseen Care. Field Practice gives your skeletons a level boost after each loop while Unseen Care gives you energy armor a permanent 0.5 boost for each skeleton you summon. Combining Unseen Care with those wooden warriors will let you boost your armor very quickly.

Basically, the wooden warriors can quickly take down your skeletons, but won’t attack you if you don’t hit them. So, you can put on early game equipment that you’ve saved, you’ll spawn tons of skeletons in a single battle. It’ll turn your flimsy necromancer into a beefy, magical tank.

Regardless of which direction you take, it’s important to stay on your toes. Loop Hero doesn’t let you choose exactly the options you want. Staying flexible and using our tips should help you build a master necromancer.