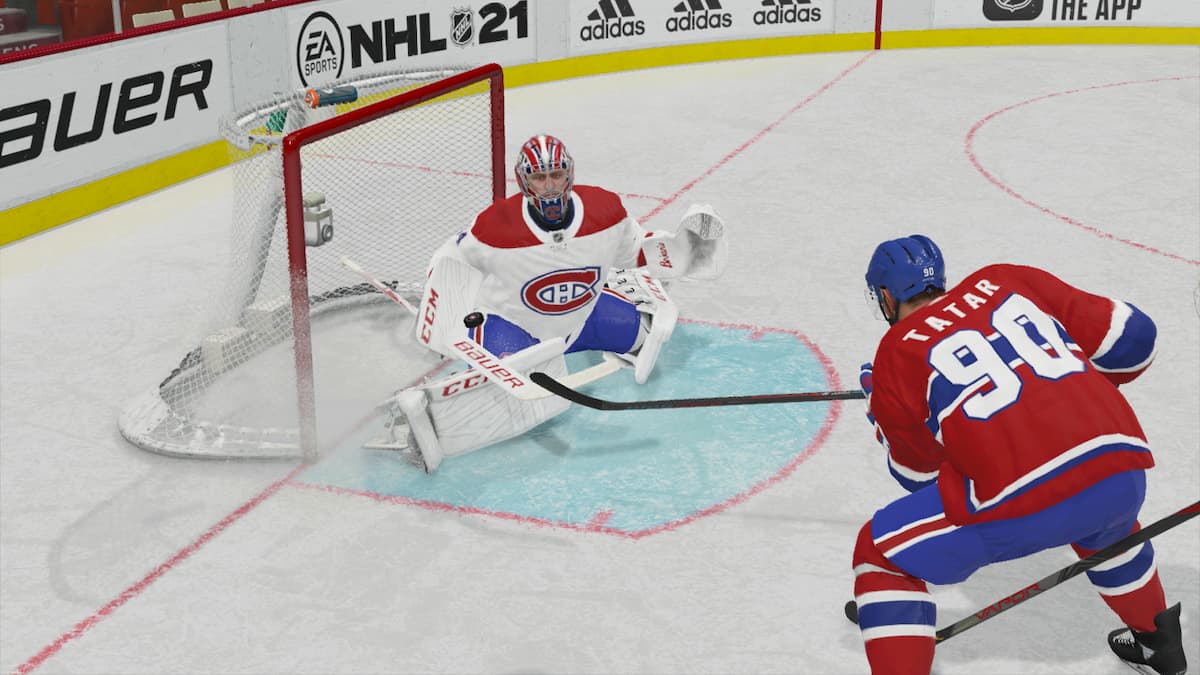 Out of all the positions in hockey, the goalie is the most important. It’s also the hardest position to play, and this sentiment remains true in NHL 21. It takes more than just knowing the controls to be an effective goaltender. Good goalies need to have strong hockey IQ, clear vision, and the ability to remain calm? But if you’re struggling with this position in NHL 21, you might be wondering how you can become better at goaltending in NHL 21? We’ve got you covered, as we’ll not only go over the goalie controls, plus some tips that should come in handy when you are in the virtual crease.

How to play goalie in NHL 21

If you’re new to NHL 21, or more specifically, new to the NHL franchise, let’s just quickly go over what you need to do to activate Goalie Mode. Goalie Mode allows users to lock into the goalie position, meaning that the user will only play this position and not control any of the skaters. If you are playing offline or in Online Versus, you will have to press LS (for Xbox One) or on the Left Stick (for PlayStation 4) and select G to lock into Goalie Mode. To play the goalie position in EASHL, make to select G at the position select screen.

You can play goalie in most game modes, including Online Versus, Shootouts, and World of CHEL. The only exception to this is HUT, as Hockey Ultimate Team does not allow users to lock into positions.

As we mentioned previously, knowing the controls helps a lot, but you will need more than that to be an effective goalie. Here are some helpful tips that you should keep in mind while playing as a goalie.

1. Avoid leaving the net as much as possible

Let’s get this out of the way first: make sure you leave the crease as little as possible. While it might seem like a good idea for the goalie to leave the crease when the puck is behind the net, more often or not, it does not help. Rather, it would be wiser to let your skaters who are coming in on the backcheck to retrieve the puck. Yes, there are some instances where it’s OK to leave the crease, such as after a clearing attempt by the opposing team while on a power play. But in most cases, avoid it at all costs.

2. Watch the puck at all times

Now let’s get into our first real goalie tip, and it’s one that we don’t think we need to tell NHL players, but it’s worth repeating: When in the crease, make sure that you watch the puck at all times during the play. Doing this will allow you to better position and align yourself with the puck and the play itself. If the puck is on the left side of the ice (your left), move your body towards the left. The same applies to if the puck is on the right. It’s also important to keep in mind this: plays move quickly. You need to make sure that you are attentive at all times, or you might get caught on a bang-bang play and give up a bad call.

Be mindful of how aggressive you are in the crease, not just in terms of playing the puck, but also how far out of the crease you are. Our recommendation is to be a bit farther of the crease when the puck is at or around the blue line in your zone, but then slowly retreat back into the net once the pucks move closer and closer to the net.

4. Get comfortable with the Butterfly

The Butterfly stance has become a staple in the real NHL, so it shouldn’t be a shocker that goalies in NHL 21 need to be familiar with this stance. The Butterfly not only helps you make saves more frequently, but it’s also a guard against low shots. To go into the Butterfly stance, press and hold either RT (for Xbox One) or R2 (for PlayStation 4) when getting ready to face a shot.

6. Keep an eye on the action around you, but…

Make sure to focus on what’s in front of you and the puck. While you might want to play for a cross-ice pass and push towards the opposing skater near the net, do not do this. It’s important to let your team take care of the opposing skaters, and it’s imperative that you trust your teammates to take them on. Your main focus should be facing the puck and to get ready to face a shot.

7. A tip for the skaters

Our last tip for goaltending has nothing to do with the goalies themselves but rather for the skaters. If you’re playing as a skater and have a human goalie in net, you have two key responsibilities in the defensive zone: 1) Stay in position and on your matchup, and 2) Avoid screening the goalie. Staying on the opposition will limit the number of scoring chances given up and make life for the goalie a lot easier. And as for the latter point. Make sure that you avoid standing in front of the goalie as much as possible. Not only can doing so lead to a deflection into the net, but it also makes it harder for the goalie to see the play.