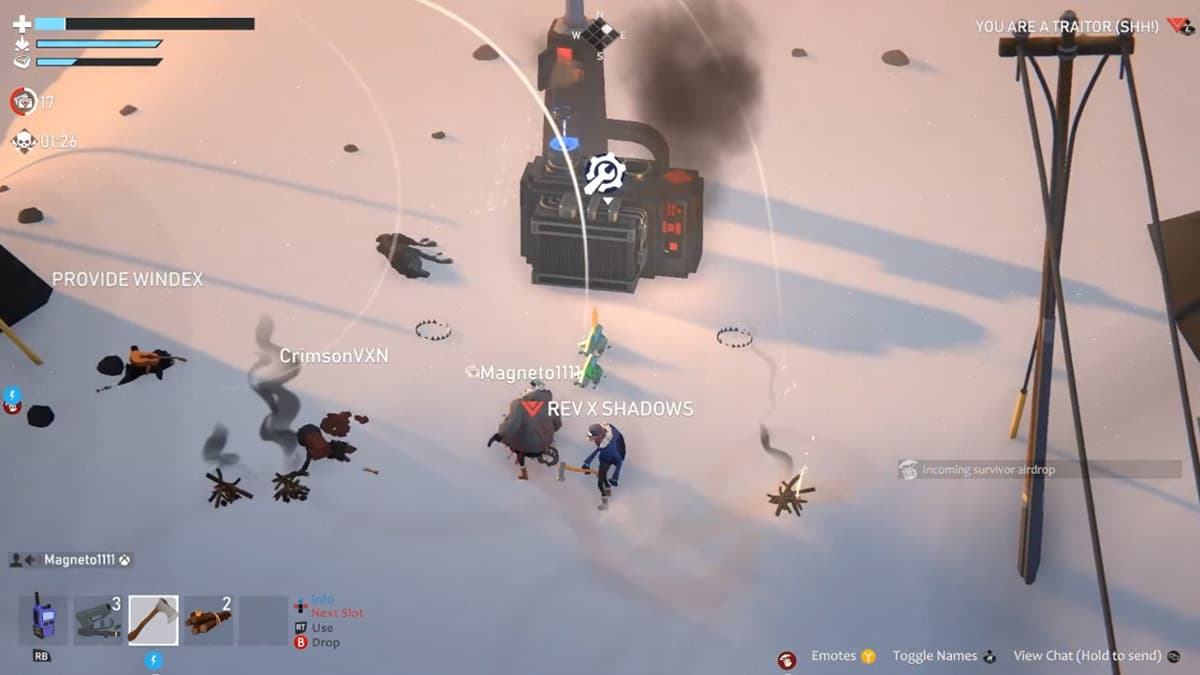 Players new to Project Winter are sure to have many questions when they first get into a public match. This reason is why it is recommended that new players give basic matchmaking a try at first since they are much simpler in terms of rules and functionality. However, sooner or later, you will be compelled to take the next step forward and jump into normal matches and find the more elaborate gameplay style present there. Among these new systems, you need to come to grips with is the various roles you are given upon starting the match. Here is a breakdown of each role in Project Winter and what you can expect with each.

Defectors can look a little suspicious to other survivors because they can open traitor crates when their ability is active. Be careful about using this around other survivors; otherwise, they may raise suspicion of you and exile or kill you. There can only be at most one Defector in a match.

Hackers can spend two electronic scraps to open a bunker by themselves. Usually, you need one or two other people to flip a switch simultaneously as you, but you can open it right away if your ability is charged. Traitors have a similar role, so someone opening a bunker by themselves does not prove innocence. It is possible to have up to two Hackers in a match.

Innocents do not do much in the game but apply a bonus to survivors if they escape on the vehicle at the end of the game. Unfortunately, there is no way to prove you are a survivor during a match with this role, so be careful around others. Up to two people can be innocent in a game.

As you would expect with Medics, they can keep others alive, although at the expense of their own health. They put out an area of effect ability that will immediately pick up anyone downed but will not work on anyone dead yet. There is a traitor role precisely the same as this, so seeing someone use this ability does not mean they can be trusted. There can be up to two Medics in a match.

Scientists like to play with the fabrics of life and death. Upon dying, each character will have a heart that can be picked up from their inventory by other players. If a Scientist grabs this heart and delivers it to the Lazarus Machine in the Truth Serum lab, they have a chance of bringing the owner of that heart back to life. A survivor’s heart has a 90% chance to be revived, while a traitor has a 75% probability of being brought back as a survivor.

If the heart is eaten or cooked in the cabin, it cannot be used to revive anyone. Also, the person who died has to have remained in the game as a spirit to have a chance to be brought back. There can only be at most one Scientist in a game, but they can also be a traitor so beware.

Soldiers can open the armory and provide fellow survivors with weapons. Traitors are the only other people who can open the armory, so other survivors might be suspicious of you if they see you open it. The way to tell the difference between the two is after the first objective in the match is completed, the Soldier can see the armory’s location on the map by the cabin. Go there immediately to coerce your teammates that you can be trusted. Only one Soldier spot is available per match.

The Detective has the unique ability to investigate dead bodies in the game and learn details about how they came to their fate. They can see if another human, an animal, or the environment killed the victim, if their identity has been stolen, a list of possible killers, and potentially more. However, they will not be able to discern whether the dead body was a survivor or a killer themselves, so be careful when pointing the finger around at suspects. Only one Detective can be present at a time.

Normal traitors are trying to delay and kill all survivors in the match. They can sabotage machinery around the map and try to blend in and earn trust from survivors.

The Medic Traitor has the same ability as the Medic Survivor to pick up people downed by spending some of their own health. You can use this ability to try and put yourself in the good graces of the survivors by faking being a helpful hand in a time of need.

Hacker Traitors can open bunkers by themselves by spending a Traitor Credit instead of electronic scrap, meaning they can use their inventory space for other means. You can use this ability to either get to resources before survivors and grab what you need while disposing of other items that could aid them, or you can fool them into believing you are a teammate.

Like the Scientist Survivor, the Scientist Traitor can bring a person back to life by delivering their heart to the Lazarus Machine in the Truth Serum Lab. Like on the other side, the dead player has to have remained in the game as a spirit to be brought back to life, but no matter which side they were on in their first life, they will be a traitor upon returning to the game. Scientist Traitors can only revive one person per match.

The Identity Thief doesn’t really side with either the survivors or the traitors. When the match starts, they are looking for a dead body to steal the role of. Whatever team that player was on is now the team you will become a part of, and you also steal whatever role that person had.

You may want to use this ability to take the side of whichever team seems to be doing better. For example, if the survivors are escaping, steal a survivor’s body so you can also jump on the escape vehicle and leave. If the traitors are doing well, take out one of them to help finish off the remaining survivors. However, be warned that if a Truth Serum is used on you before you have stolen an identity, you will appear to the serum user as part of the opposing team. Only one Identity Thief can be in a match.