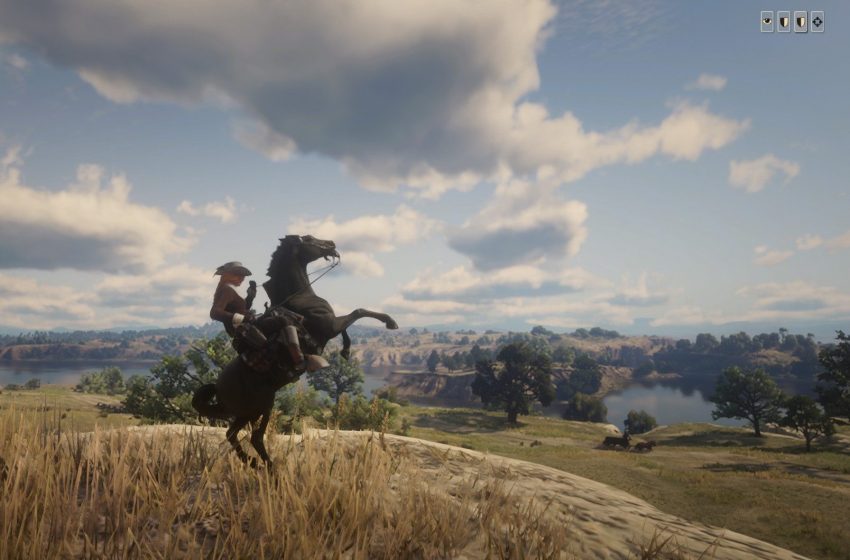 The horses in Red Dead Online are more than transportation. They’re the player’s partner, carrying them over dangerous terrain and trampling enemies in combat. Sure, they might throw the player to a pack of wolves now and then, but you depend on your horse as much as it depends on you. Which one is the best depends on what the player needs from the horse and the equipment. Here are the ones with some of the best stats.

What makes a horse the best?

While the Nacogdoches saddle evens the playing field, there are some quality high tier horses. This is based on health, stamina, speed, and acceleration. While there is anecdotal evidence for temperament, bravery is either a nonexistent stat, randomized on purchase of the individual horse, or suffers from confirmation bias. All horses will throw the rider under the right circumstances. These circumstances can be manipulated with the soothe mechanic and distance.

The Collector level 20 Criollo and the Missouri Fox Trotter are combined because their stats are identical. They have the same base health, speed, stamina, and acceleration. With the Nacogdoches saddle, the Criollo and Fox Trotter will both have maximum speed (ten) and eight acceleration.

Of the two, the Fox Trotter is probably easier to get but may take longer. The Fox Trotter unlocks naturally at level 58 for $950. It comes in two coats, the Amber Champaign and the Silver Dapple Pinto. Both have the same stats, so pick the color you prefer.

To get the best Criollo, players need to be level 20 in the Collector role. To get the Collector role, players have to buy the Collector bag from Madam Nazar using gold. It often goes on sale, and Rockstar frequently gives it away for free to players with their Twitch Prime account linked. Thanks to the online resources, gathering the collections to level up makes the process fast and straightforward.

The Criollo will also set you back $950. You can choose between the Bay Frame Overo and the Marble Sabino. With stats and price identical to the Fox Trotter, pick whichever coat you like best. If it makes a difference, NPCs will complement the Fox Trotter as you go by, but will not compliment the Criollo or any of the role horses.

The rock-solid Trader horse with its unusual nose is the only horse with maxed stamina and health. The level 20 Kladruber horse is on the slower side, hitting a solid seven in speed with the Nacogdoches saddle. Speed may not be its strong suit, but this horse is a tank that can take several shots and keep going. This breed is enormous, second only to the Shire. Its odd nose may not appeal to everyone.

The Kladruber is the Trader Role horse, and like the other role horses, it requires unlocking the role for gold. At level 20, while fully bonded, these horses will have ten in both health and stamina, the only horse to have these stats. Leveling trader takes a lot of in-game money and time, but the reward is worth it. Even the level one and level ten Kladrubers are worth purchasing as they’re a solid horse that can take a beating. Their bravery may vary, but they’re more often than not a stable, consistent horse.

As with the other trader horses, the level 20 Kladruber costs $950 and comes with two beautiful coats: Silver and Dapple Rose Grey.

The Breton is the Bounty Hunter horse, and of all the role horses, it’s the best generalist. The level 20 Breton will get ten stamina, nine health, and with a Nacogdoches saddle, and nine-speed. This chunky little horse may not look like a racer, but it will run with the best of them. It is very fast and strong, making it one of the best horses in the game. The Breton’s temperament is inconsistent, varying more than the Kladruber. And at $950, repurchasing until you get a stable horse is an annoyance.

The Mealy Dapple Bay and the Steel Grey Bretons unlock at Bounty Hunter level 20. Bounty Hunter takes the longest to level up and very repetitive, but it is worth it for the Breton.

If you’re unsure about the Breton, the level one Breton is free and makes a good test run.

The last of the role horses, at least until we get another role, is the Moonshiner exclusive horse, the Norfolk Roadster. It may not have the best health, reaching a less than hardy seven at stage four bonding, but it is speedy and consistently very brave. The Norfolk Roadster dethroned the Fox Trotter for the fastest horse in the game. The Roadster reaches maximum speed, and with nine acceleration, if speed is your preferred stat, the Roadster is the best you can get.

The top Norfolk Roadster unlocks at Moonshiner level 20. Leveling Moonshiner takes longer than the Collector role, but less time than the Bounty Hunter. The Roadster $950 has two lovely coats, the Spotted Tricolor and the Dappled Buckskin.

The Turkoman is a popular breed from a single-player that is also available online. This skinny, dainty horse may not look it, but it’s a war and race horse combination, making it fast and healthy. More often than not, the Turkoman is a brave horse, although on the fidgety side like the Arabians. Most horse breeds do not have as many idle animations, but the Arabians and Turkomans both move a lot while idle. It may become visually annoying to some players.

At stage four bonding, your Turkoman will have maximum health and eight stamina. They’re good in a gunfight and consistently brave when running into predators. The horse breed unlocks at level 56 and has three coat options that cost a varying amount of money: the bay Turkoman costs $925, the gold Turkoman costs $950, while the silver Turkoman will set you back 38 gold. From my experience, the NPCs do not compliment the silver coat but will fawn over your bay or gold Turkoman.

“The best horse a man can own,” according to the in-game catalog. The Arabians are some of the best horses in the game, even purchasing the little Chestnut Red Arabian early in the game will help players looking for a good, early horse that NPCs will not stop admiring. Arabians are good generalists, with good speed, the best acceleration, decent health, and stamina. Their best trait is elite handling. Standard handling is fine in most cases, but Elite handling feels good while riding. They turn on a dime and stop faster than their standard, race, and heavy counterparts. If trees are the bane of your riding existence, the Arabian’s elite handling may save you some tonics.

The best Arabian is the black coat. But it costs 40 gold, which you will likely need to grind in-game or buy yourself. And you’re not paying for much of an upgrade over the white coat that costs $850. Both will have the same acceleration and speed. The black coat will have nine stamina and health, while the white will have eight stamina and health at four bonding. In this case, you are buying the color and one extra health and stamina. With the Nacogdoches saddle, you won’t see a difference in stamina. The extra tick in health may help you in bounties or gunfights, however. The white coat unlocks at level 66 while the black coat unlocks at level 70.

The Reverse Dapple Roan Nokota, Brindle Thoroughbred, and Black Chestnut Thoroughbred have the same stats and the benefit of race handling. Race may not be as good as the elite, but it is a step above the standard. All three race horses will have six health and stamina, making them on the lower average side. However, all three will also reach maximum speed with strong acceleration.

The Nokota and Brindle Thoroughbred will cost 18 gold, but if you bought the Ultimate Edition of the game, you could get the Black Chestnut Thoroughbred for free immediately from any stable. If for some reason, you discard your free Thoroughbred, you can reclaim it for free at any time.

You cannot go wrong with War horses. They’re sturdy with great health. Their speed is lacking, but they will stay by your side in a battle. The Strawberry Roan Ardennes, the Perlino Andalusian, and the Rose Grey Andalusian all have the same stats with moderate stamina and maximum health. The Ardennes is bulky and intimidating, while the other Andalusian has more of the typical horse appearance. The Rose Grey Andalusian and the Strawberry Roan Ardennes will both cost gold, while the Perlino Andalusian will only set you back $450 and can be unlocked earlier than the other two.

Draft horses do not get enough love. As some of the lower tier categories, there isn’t much variation between the horses in the draft category. Personally, the big, chunky Shire is the best. They have better, although still subpar, health than the other drafts. Their stamina maxes to half after they’re fully bonded with health only slightly higher. Slap a Nacogdoches saddle on them, and stamina will not matter. It will also bring these slow-moving horses up to a solid average. All draft horses have a significant drawback: heavy handling. They aren’t nimble and have a poor turn radius, but you’ll manage.

Shires can be bought very early, and even if they aren’t the best horses, they are still better than the starting horses. They also only cost $130, and while in the early stages, that’s expensive, it’s easy to farm up with enough missions.

There isn’t much variation within the Work horse category. The American Paints and Dutch Warmbloods have better stamina but sacrifice a tick of health. Appaloosa horses have better health and lower stamina. The speed stat is roughly the same for all the higher tier horses within the category, while American Paint horses have better acceleration. It’s really up to the buyer here. If you like size, pick the Dutch Warmblood, but if you value a smaller horse, get the Appaloosa. If you want a unique horse, the Appaloosa or American Paint will stand out against all the Arabians.

The best horses in the Work category are all bought for gold. The best Appaloosa and Dutch Warmblood cost 18 gold while the top American Paint costs 17.

There are a lot of quality horses in Red Dead Online. While we’ve listed some with the best base stats, the Nacogdoches saddle evens the playing field. All horses can be good. All horses can be viable. My favorite horse is the 130 dollar grullo dun Mustang, despite owning the white and black Arabians, Turkoman, Kladruber, and Fox Trotter. Pick the horse you like best and equip it with a Nacogdoches saddle to unlock its full potential.