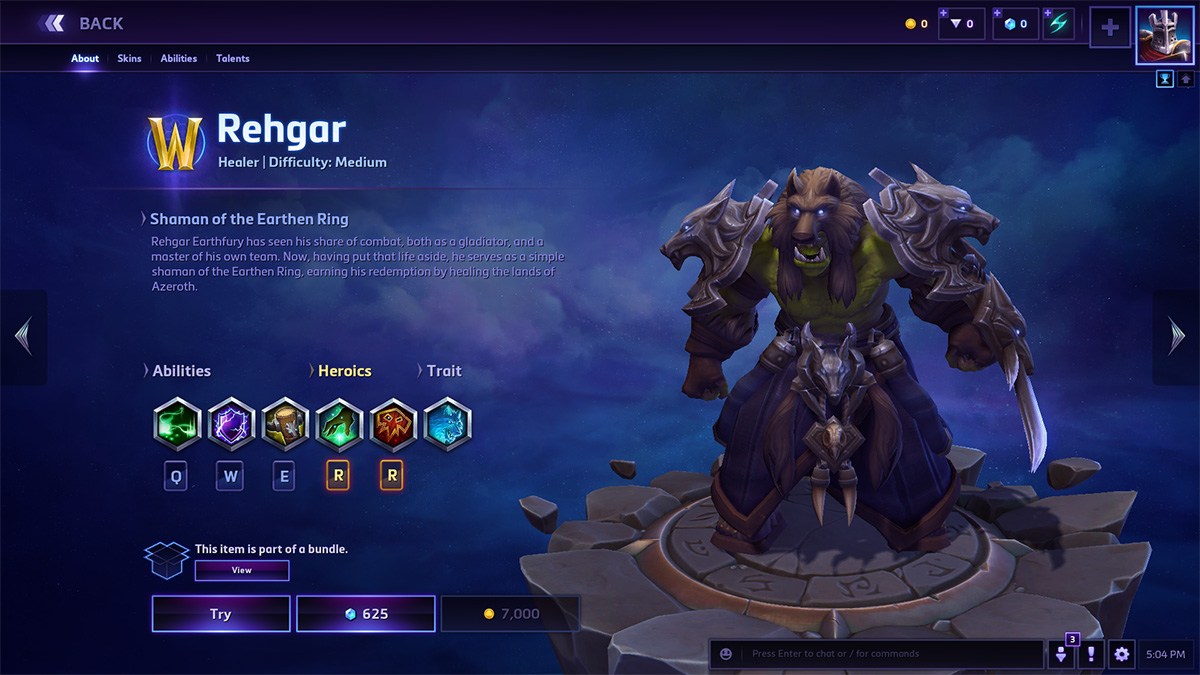 Rehgar Earthfury is a close advisor to Thrall, the Orc War Chief from the Warcraft franchise. Like many other characters in Blizzard franchise history, Rehgar is available as a character in their MOBA, Heroes of the Storm. If you have recently decided to purchase the former slave turned shaman, you will need to learn a proper way to build him to get the most out of his support abilities. Here are some useful ways to develop your Rehgar in Heroes of the Storm as your team levels up.

When starting the game off, we recommend grabbing Colossal Totem. This talent increases the area and range of Earthbind Totem by 50%, and it can be reactivated to move an existing totem to a new location once. Earthbind Totem’s ability to slow down surrounding enemies is already especially useful for creating room for you to escape or prevent an enemy from escaping a fight. Now that you extend the radius of the spell, you can catch even more enemies in it.

If you would rather buff your Lightning Shield, you can choose to go with Electric Charge, which will instead add a 25% radius to Lightning Shield and heal Rehgar 30% of the damage it does to enemies. When you are in a tight spot, though, the Slow ability from Earthbind Totem will be more likely to save your life, and the 10% buff to wolf speed that Wolf Run gives is not nearly useful enough to recommend taking at level one.

The choices to unlock at the fourth level are more arguable than the previous entry. Healing Totem is probably where we would recommend leaning as it provides Rehgar with an area of effect healing that can come in handy when your other forms of healing are exhausted. The 2% healing for ten seconds may seem minimal, but it could be the difference between a fight won and loss.

As for the other options, as stated above, these choices are not necessarily bad. If you do not grab Healing Totem, we would recommend Storm Caller as its potential to recover up to 100 mana if Lightning Shield does immense damage is nice to have to replenish your resources. Of course, the 75% health regeneration in wolf form with Feral Heart is nice to have as well.

At the seventh level, we highly recommend choosing either Grounded Totem or Cleanse over Blood and Thunder. Grounded Totem will slow enemies in its radius and lower their attack speed by 40%, harshly making them less lethal. The extra health to the Totem is just a bonus at that point. Cleanse will make an ally unstoppable for one second, nullifying any negative status effects or crowd control. While not lasting for a long time, using it at the proper time on a teammate can save their life and turn the tide of battle in your favor.

The two-second reduction to cooldowns from attacking in wolf form is not valuable enough compared to the other two talents at this level.

Either of the choices at level 10 has its uses for helping your teammates in challenging situations. Ancestral Healing heals one teammate for 1,180 health over a second. On the other hand, Bloodlust buffs teammates attack speed by 40%, and their movement speed by 35%. As a bonus, the person on the other end of this spell will heal for 30% of the basic attack damage they deal over the six seconds the ability lasts.

We slightly recommend Bloodlust because of its ability to make your teammate more deadly on the field. Still, there is obviously a lot of viability in Ancestral Healing’s massive burst of health in a short time.

For the choices at level 13, we recommend going with either Earthliving Enchant or Earth Shield. Earth Shield will give your ally a barrier worth 12% of their max health, a nice little boost in crucial situations. However, Earthliving Enchant adds an additional 225 health over five seconds when healing a teammate below 50% health with Chain Heal. Both of these potential life-saving abilities should outweigh the little mana and cooldown reduction that Tidal Waves provides.

We highly recommend further boosting your Earthbind Totem with Earthgrasp Totem. The 90% slow effect at the start of the totem’s activation will easily give you or allies a chance to escape or hunt down potential fleeing enemies. If you are not great at timing your totem’s uses for this talent, go with Rising Storm. Rising Storm will give yourself an unupgraded Lightning Shield when you give a teammate one. If you and your teammate are quick to output damage while they are active, you will add a 10% boost to your Lightning Shields, which can stack up to 15 times. While a potential 150% damage boost to Lightning Shields sounds nice, it is unlikely you will get the full boost within the five seconds of the ability’s time active.

Hunger of the Wolf should only be chosen if you have decided to go with the other wolf talents earlier in the leveling process. The wolf form’s damage will deal an additional 5% of the target’s overall health and transfer that into healing Rehgar. When compared with the other options at level 16, we cannot recommend going with this option.

At level 20, there is honestly no wrong choice for talents, depending on your preferences earlier in the talent list. If anything, we recommend Rewind for the easy reset to all your abilities instantly. Farseer’s Blessing will activate Ancestral Healing a second time on the same target (further ensuring their survival) but will also heal nearby allies for 590. Combined with your other healing, and your team will be that much tougher to take down, or if you chose Bloodlust earlier, Gladiator’s War Shout will double the range and duration of that ability. Finally, Storm Shield’s ability to give all nearby allies a shield worth 20% of their health for three seconds is as good as anything for quick defense.