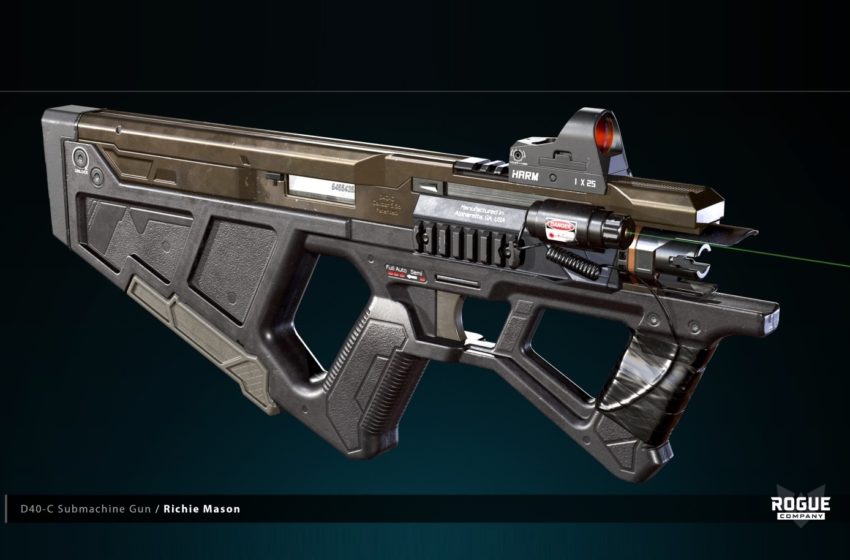 Rogue Company is a tactical shooter with a focus on positioning, movement, and out-plays, and gunplay is, therefore, a lot more fluid and intuitive than in games like Valorant or Apex Legends. For starters, swap and aim-down-sights speed are the same across the board, with only minor variance for “slower” weapons like the MLX Mark 4. You don’t need to worry about this type of stuff when picking your primary, and switching from one weapon to another is always faster than reloading.

You will see Range as a stat in the weapon descriptions – this is the maximum range in meters that the weapon deals full damage in. Damage falloff beyond that point is gradual and varies quite a bit from weapon to weapon. Dedicated marksman rifles generally have very high falloff range, and upgrading your sniper to Tier 3 removes damage falloff completely.

Headshot multiplier is almost universally x1.5 across all guns, which puts the emphasis less on aiming and more on good positioning and movement. This is what Hi-Rez mean when they say Rogue Company is a hybrid between tactical and action gameplay.

Speaking of aim, there is no aim drift in Rogue Company. Movement causes some minor inaccuracy, as does firing continuously, but nothing as intense as CSGO. Standing still and squatting adds a negligible first shot accuracy bonus. On a final note, all shotguns choke up when aiming down sights, although the spread reduction is different for each weapon.

Now that we have the technical stuff out of the way let’s look into how each gun in Rogue Company performs individually.

Arbitrator. This heavy-hitting shotgun can 1hko at close range with ease. It only fires two shells before needing to reload, although that’s more than enough to body someone. However, it does run dry fast, so try to combine it with ammo perks. ADS choke is significant.

SKL-6. This powerful shotgun has good damage, tight spread, and good ADS choke. Reloads one shell at a time.

S12 Tactical. This is a flexible and user-friendly shotgun introduced with Vy. It has a slightly longer effective range than the other shotguns in Rogue Company but chokes up less when in ADS. It’s easy to land shots with, but it’s not as good at actually downing players as the SKL-6. Reloads one shell at a time.

Striker 8×10. Lancer’s fully automatic shotgun is very deadly when you’re basically in melee range, and a lot less so when not due to having the biggest pellet spread and the least ADS choke in the class. Its long reload is off-set by the fact that you never really have to reload it, because you’re Lancer. However, other rogues should be wary of picking up a Striker if they are not used to it.

KA30. This flexible assault rifle is brutally effective at close and mid-range. It has a relatively long reload time, so make sure to grab the Tier 1 upgrade ASAP.

HRM-30KS. This common assault rifle has a low rate of fire and small magazine capacity, but high damage per round and good damage range. It rewards accurate gunners and is worth upgrading to Tier 3.

MLX Mark 4. This powerful hybrid rifle works best at mid-range. It can threaten long-range opponents due to its built-in scope and excellent accuracy, but its damage falloff isn’t great, and trying to duel a dedicated sniper will usually get you killed. Gets much better when built up, so buy those upgrades.

Nightshade. Vy’s unique weapon looks cool, but it has slightly lower DPS and effective range than other assault rifles in Rogue Company. That said, the Nightshade is very accurate, so you can count on headshots, and it comes with a built-in silencer as a little bonus.

Mamba. The Maba is a hard-hitting burst rifle with very good falloff range. It’s perfect for holding angles and defending objectives. It’s worth upgrading if your team has no dedicated sniper; otherwise, you can run it at base.

MLX Maw. The only LMG in Rogue Company at launch, the Maw is a simple and brutally effective close-to-mid range weapon. DPS is actually not bad, and the Maw’s shots can penetrate targets. The Maw’s only drawback is its long 4-second reload time. With 60 rounds per mag base, this really won’t be a problem.

Executioner. One of the most common Rogue Company sidearms – this is a powerful and flexible semi-auto pistol that can work miracles with good footwork. Has the most damage per mag of all pistols.

P12K. This silenced pistol has similar DPS and mechanics to the Executioner, but it needs to land more shots on target to secure a kill, and unfortunately, comes with a smaller magazine and slightly lower effective range. It’s much more deadly when you sneak up on someone.

Spitfire. This auto pistol has good DPS, but its low effective range and small mag make it sub-optimal in a stand-up fight. Use it for sneak attacks and to finish off damaged and downed opponents from range.

LW6 Revolver. Dallas’ sidearm is a powerful six-shooter that boasts the best falloff range and burst damage in the class but has low DPS. There’s no need to upgrade it – it works as a dependable finisher at base.

A3 Salvo. This sidearm got a lot of hate during the closed beta, but it’s secretly a great gun. The Salvo fires in bursts and is very dependable, getting consistent damage when hipfired.

24S. Lancer’s SMG looks cool but is very much middle of the road stats-wise. Don’t buy upgrades for it until you have Evade and Life Drain, and even then, your money might be better spent elsewhere.

D40-C. Chaac’s futuristic-looking SMG performs and handles very much like the rest of Rogue Company’s SMGs. It’s described as a “high capacity” weapon, and indeed it has 40 rounds per mag base, but this quality is offset by low damage per round. Still, this gun can ratatat a little longer than the average SMG, so it can provide decent suppressing fire at times.

LMP-X. This is the most accurate SMG in Rogue Company, but it’s still very much an SMG, so you shouldn’t count on it in mid-range and beyond. It comes with a silencer at base.

SL-C. This SMG is inaccurate until upgraded, but its extreme DPS makes it worth working with. Think of it as Rogue Company’s version of Apex Legends’ R-99. Each of its upgrades boosts its power significantly, so you should put some money into it.

D3D-i. This powerful and flexible DMR can knock people at range with high precision shots, or up-close with its excellent hipfire.

Arren L2-12. A fast-firing DMR which is comparable to the D3D-i in performance. The big mag and incredibly quick reload make it useful for all types of playstyles.

Devotion. Similar to the D3D-I and Arren, the Devotion is slower but hits harder. Fitting in with Dallas’ overall theme as a gunslinger, this gun can outperform the other two, but only if its user has a steady hand. At Tier 1, its shots can penetrate targets. Reloads one round at a time.

MX-R. Another fast-firing DMR, the MX-R has below-average falloff range and accuracy at base, but is devastating in mid-range, and becomes a very competent long-range weapon when fully upgraded. All of its upgrades are worth getting.

LR15 Fullbody. Rogue Company’s most sniper-like sniper rifle, the Fullbody has only one purpose: to delete people with headshots. It’s worth sinking your money into this gun, as each upgrade tier brings a meaningful improvement.