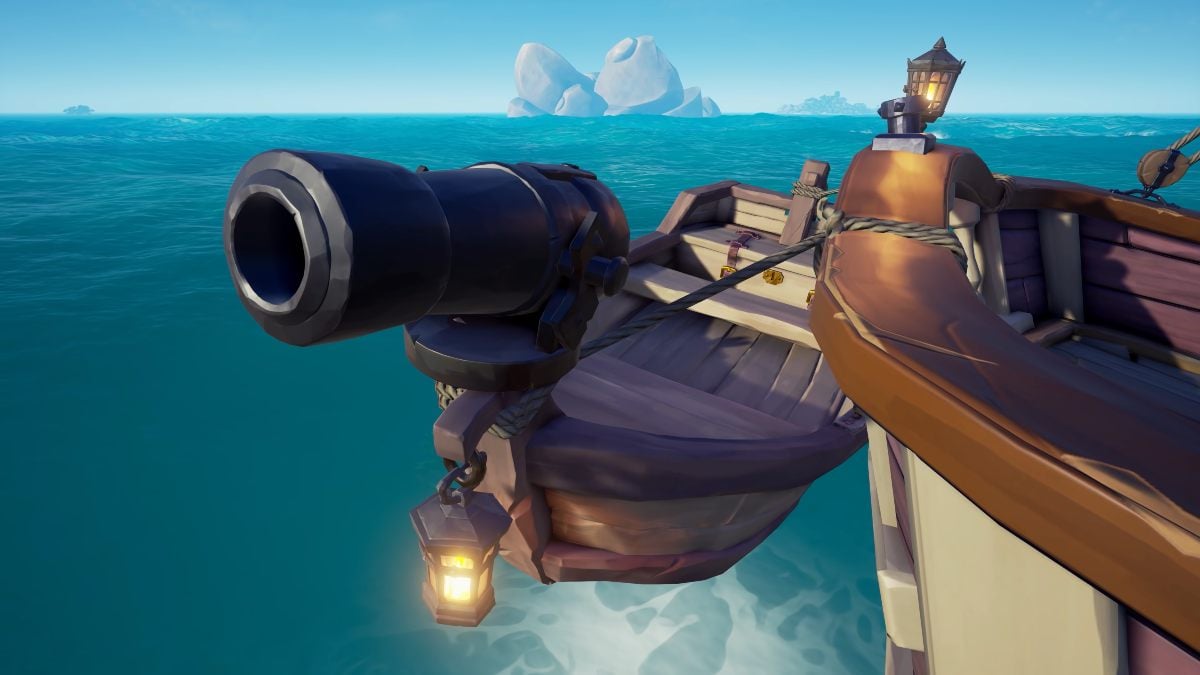 The Cannon Rowboat dropped as part of Sea of Thieves Season Five and is the smallest armed vessel in the game. Like Rowboats without cannons attached to them, Cannon Rowboats can spawn on any Island (minus Outposts and Seaposts). Knowing how to use Cannon Rowboats effectively in combat can make all the difference in your Sea of Thieves PvP experience. Here are some tips and strategies to maximize your efforts in combat.

One of the worst things that can happen in Sea of Thieves is running out of Cannonballs or food in the middle of a fight. Be sure to fill up your Cannon Rowboat Chest with food and ammo as soon as you get the opportunity. You can also bring an extra Storage Crate full of supplies on board if you think you’ll need it.

The Cannon Rowboat is best used with two people — one person rowing, another person firing the cannon. Aside from having the obvious advantage of being able to move and shoot simultaneously, you’ll also be able to avoid the Cannon Rowboat’s knockback from firing. Have the person rowing hold the brakes to prevent knockback. Sometimes, however, knockback can be an advantage, as it allows for quick and easy maneuvering/dodging. Communicate with your shipmate to maximize your agility.

If you’re in a Cannon Rowboat and in a fight with a larger ship, do your best to make yourself a thin target. Try to keep the front of your Cannon Rowboat pointed at the enemy vessel at all times. If one person is on the enemy cannons, point your boat directly at their cannon. This may seem obvious to some players, but turning your boat parallel to an enemy ship makes you wider from the enemy’s perspective and easier to hit.

The Cannon Rowboat can increase your ship’s overall firepower by docking it onto the back. To do so, row up to the back of your ship and wait for the prompt to appear. Once docked, you’ll have access to the rowboat’s extra cannon. This can be incredibly useful on a Sloop, as it effectively doubles your firepower on one side. That said, we recommend docking it onto a Brigantine because of its ease of access. Instead of running down and around to reach it, you can hop over the back. You can also dock onto an enemy ship and fire at their allies if the opportunity presents itself.

Use your mobile cannon to your advantage. If you’re part of a larger crew that enters into combat, have one or two people attempt to flank the enemy ship to deal damage and distract them. The best place to situate is behind the enemy vessel. Here, you’ll be safe from their cannons, and at least one enemy will have to stop what they’re doing to come and fight you. This can give your crew a serious advantage in combat as your more heavily armored vessel presses the assault.

Related: How to whisper with the Speaking Trumpet in Sea of Thieves

Like the normal Rowboat, the Cannon Rowboat is useful for sneaking aboard enemy vessels. It’s exceptionally quiet, allowing you to row up to the back of an enemy’s vessel and dock onto their ship. Unlike the regular Rowboat, the Cannon Rowboat also lets you shoot yourself onto or near an enemy vessel. The shot will be loud, though, so you’ll need to be far away. Even then, the enemy crew will likely be on alert. Once onboard, you can stealthily grab some loot and take off, or you can wreak havoc with weapons and Firebombs.

The Cannon Rowboat’s mobile firepower can help you make an easy escape if you get into trouble in PvP. If an enemy ship is chasing you while you have a Cannon Rowboat docked on the back of your ship, make sure you have some Chainshot in your inventory. Then, undock your Cannon Rowboat, turn around, and take out the enemy ship’s masts with the Chainshot. Once that’s done, hop into the water, catch a Mermaid, and teleport back to your ship. You’ll lose your Cannon Rowboat, but you should have been able to make a daring escape. Just don’t miss your shots.