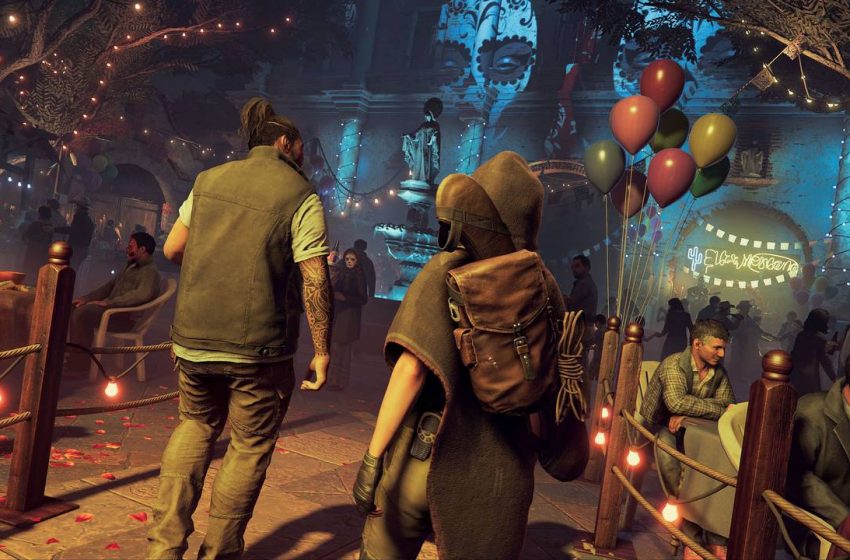 In the previous chapter VIA VERITAS, Lara and Jonah were attacked by Trinity to acquire the silver. The next chapter, Veni Vidi Perdidi, continues straight after Jonah runs with the box. In the ending chapter, City Of The Serpent, Lara will face Dominguez, who is the final boss of the game, and save Paititi.

The chapter will start with the church from where Jonah runs away with the silver box. You have to find him.

Get Through Trinity Forces

Outside there will be a few guards. You will be playing in stealth to kill them and then move on. The guards won’t be armed if you don’t create an alert. Use the mud patches to hide from the guards. Once again you will be facing a few more guards in your way once you hear a message.

Jonah will share his location—follow the beacon towards the field. Once you climb the door you will see more soldiers. Once again you will be playing a similar stealth based gameplay in the field. Kill the soldiers—you need to kill all so that you’re not attacked if you’re detected. If you are, they all will shoot at you. In the cutscene, you’ll see more guards are deployed from a helicopter. This will trigger a weapon fight. You will have to watch for the grenades.

Jonah will tell you that he has managed to get a chopper, follow the beacon to meet him. Next, you will see a cutscene where Dominguez will throw Jonah out of the chopper. He will take the box and escape. After the cutscene, you will have to escape a mudslide. Start running, jump over a hole, and then go left. Take the stairs of a house and then jump towards the pole to land on a broken roof. Go straight and jump on another pole then onto a grapple swing to go down. Jump towards the logs and then on the ground, you will see it will break and falls. Slide down and then hang on the rope.

Keep sliding through the broken roofs and use grapple swinging to reach on other platforms. This will end once you jump into the water. In the cutscene, you will see Lara talking to Jonah about the loss of the box. Back to Paititi, Etzli will suggest to work on a plan. The chapters ends here.

City Of The Serpent Walkthrough

After finding out that Dominguez has taken away the silver box, you will be following him towards the temple where he will perform the final ritual.

Locate Etzli in the cave and talk to him. Uchu will explain the plan. After leaving Jonah and Etzli, swim under water to reach the other side. You will be swimming through a underwater volcano. Along with the smoke, you will also have to escape from falling rocks.

Go To The Crimson Fire

The path is on the right, walk around the mountain and keep walking towards the beacon. As you finish walking jump towards the pole and then use the wall to crawl to the left top side. Follow the same thing to go further. You will see the helicopter targeting and taking down the people. Wait for the helicopter to pass and then walk on the pole and use axe swing to climb on the structure in your front.

Grapple down and swing ahead, look for poles with white ropes and shoot arrows to tie a rope in between. In another cutscene, you will see the queen of the cave dwellers. She is the Crimson Fire. She will give Lara a mask and both will fight together.

Once it opens up you will see Dominguez performing his final ritual. He will tell his guards to attack—you will be facing Trinity guards in the temple area. Shoot down all the guards first, and then take the entrance from where the guard came in. Just follow the flash. You will be counter-attacking a second pack of soldiers after a helicopter attack.

After the creatures stop the machine gun, climb from the right. You will be climbing through wooden logs attacked to the walls. Just keep moving by hanging through the wall edges and swinging ahead with the help of poles to reach Dominguez.

Once you reach him, Dominguez unlocks the box. You will have to destroy the icons to release the energy trapped inside them. With that, you will also have to face the warriors. Take the first one, which is on the back side of Dominguez. Hide in the plantation to avoid the guards. if you are spotted then use a rifle. There will be around three of them, after breaking it you will fight with Dominguez.

Shoot him with a gun and when approaches you he will attack in slow mode. Just as he turns his sword he will release a stream of fire, so run as far as possible. Keep shooting and, next, he will draw out a bow and arrow. You have to use the columns around to avoid it, but if you hide he won’t attack. So first you have to be in his range and, once he shoots, take cover. After shooting him, he will release an orb of energy—go near him and attack. Lara will be able to pull out his sword.

This will trigger the second phase of the fight. First, he will use the same sword attack, and then he will shoot an arrow. But this time he will be fast. Try to take a head shot as much as possible and wait for him to release the energy orb. Go near him and attack. But second time also Lara will fail.

In the third phase of the fight dodge his attacks first. And once again target the head, his warriors will try to protect him so first kill the guard. Then focus on Dominguez. In the third attempt, Lara will be finally able to stab Dominguez but he will not die. He will follow you, shoot him and then stable with the knife. In the last and final phase of the fight, he will teleport and follow you. Keep shooting his head and then stab him once you are able to see the energy orb.

The game is over once Dominguez dies, in the final cutscene Lara will see a flashback of her past life and the ending of Shadow Of The Tomb Raider.

For more updates on the game, you can also go through our Shadow Of The Tomb Raider Wiki guide.