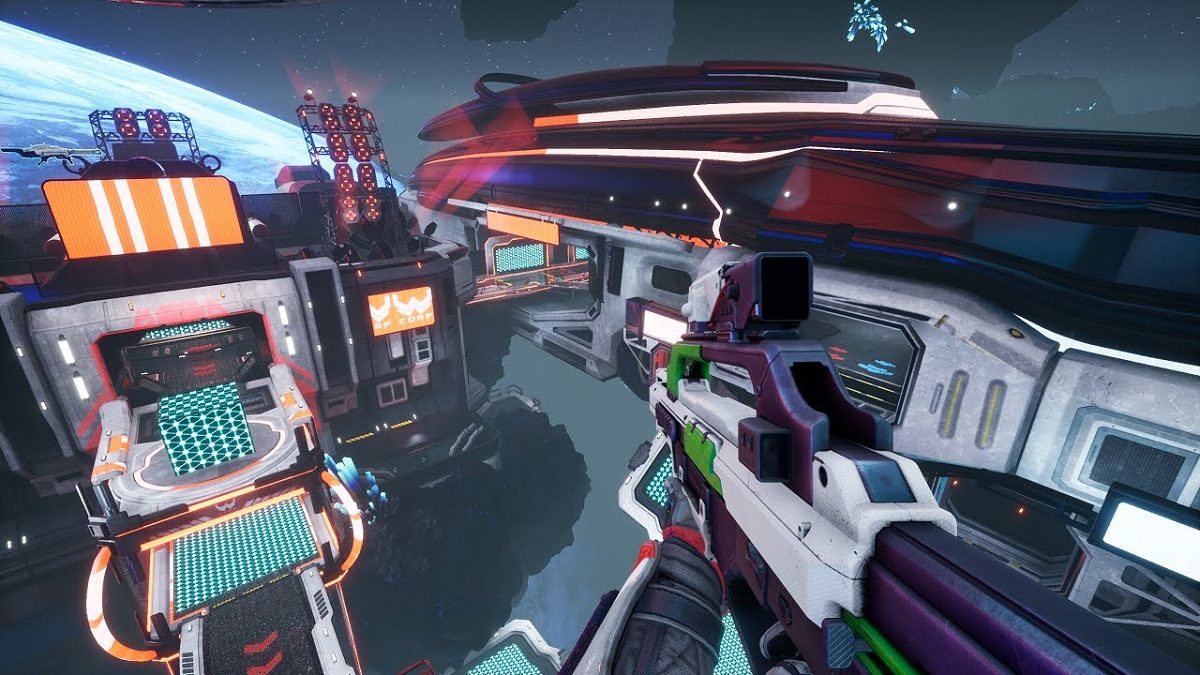 Splitgate is a free-to-play multiplayer FPS game that is essentially a combination of Halo and Portal. The game features a diverse array of weapons, each of which brings something new to the table. To assist players in making the optimal weapon selection, we’ve compiled a list of all the weapons in the game, graded from our most favorite to least favorite.

As the name suggests, the Rocket Launcher fires missiles that guarantee a kill every time it connects with the target. Additionally, the missile will explode once it hits a player or a surface, and any player caught in its impact will die as well.

For a Sniper rifle, this gun has an incredible fire rate. You can hold up to four bullets in its chamber, which is good enough to eliminate an entire team. The general tactic while using a Sniper rifle should be to sit back and utilize its long-range for eliminating enemies.

The Railgun is easily one of the most busted weapons in the game. Apart from the Rocket Launcher, It is the only gun in the game that has the potential to one-shot anyone regardless of the distance or precision. The Railgun’s only drawback is that it charges a little before each fire, giving the opponent enough time to respond.

The Shotgun is a pump-action weapon with a four-shell internal capacity. It is capable of eliminating anyone within the range of five to 10 meters. There is not much to say about Shotgun other than that it decimates everyone at close range.

The SMG boasts the highest fire rate in Splitgate. It has a decent mag size that is enough for taking down multiple enemies in one clip. Although designed for close range, SMG is a viable option for mid to long-range fights as well.

The BFB is a metal bat that assures a kill if it hits the target. However, unlike most melee weapons in other games, the BFB has a significantly longer range on its lunge.

The Battle Rifle is a burst weapon that is very similar to the Assault Rifle. However, the Battle Riffle is more potent and can quickly annihilate the target if the bullets connect. Furthermore, players can use ADS on the weapon for better accuracy or simply hip fire for a quick burst.

The Carbine is a common weapon that players will likely come across at the start of the game. The weapon is a semi-automatic sniper rifle that has a zoom-in mode available. However, the Carbine has mediocre damage stats, and the attack speed is low as well.

If you are picking up the Assault Rifle in Splitgate, you need to hit headshots. It doesn’t deal as much damage as some of the other weapons on the list, but it’s still effective at all ranges. The Assault Rifle is more geared towards new players as it is easy to use.

Although the Plasma Rifle is technically a rifle, it is only effective in the close range. It is one of the only two weapons in the game that fires projectiles instead of conventional rounds. The Plasma Rifle isn’t worth picking up unless you’re on top of someone or firing the weapon from close range.

Players should usually avoid picking the Pistol in Splitgate unless there is no other weapon is available. It’s one of the worst weapons in the game due to its low damage and slow fire rate. Apart from the early game, a Pistol is not worth picking up at any stage.