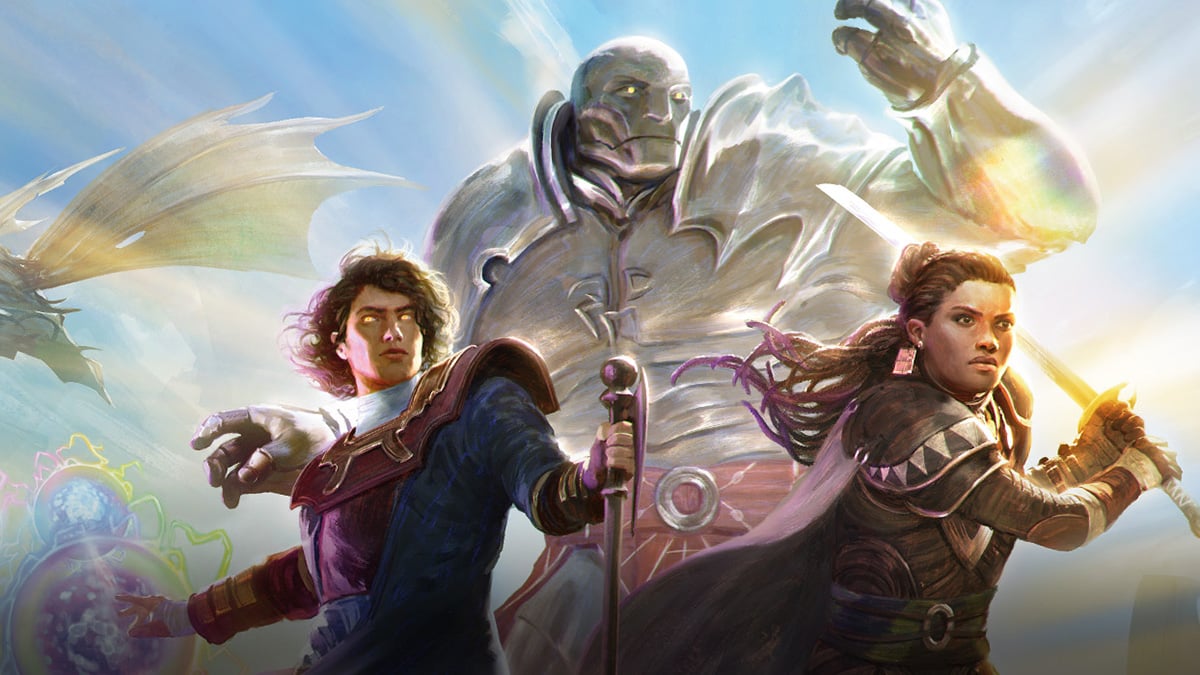 While every Commander can shine in casual play given the right circumstances, these Commanders are chosen for their general utility. They can be used for multiple deck ideas and are a great place to get some ideas for deck building. This list will start with single-color recommendations, followed by multi-colored cards.

This list will not just include potential Commanders in the Dominaria United Commanders set. Other cards in the regular set will be listed as well.

Being able to look at the top of your library at any point in the game is a useful ability. Mihail takes that to the next level if your Commander deck is based around Merfolk, letting you cast them from the top of your library. Paying an additional mana to create a 1/1 Merfolk token can also fill the board quickly, giving you an army to work with. It’s perfect for other cards that work with Merfolk, or enjoy having lots of creatures in play.

Even if you weren’t going to use Merfolk and just want to see the top card of your deck, Mihail is still useful. Not all blue Commander decks are Merfolk based, but they will definitely benefit from a few Merfolk cards.

Goblin decks are known for their fast attacks, even in the Commander format. Squee has a relatively cheap mana cost compared to other red Commanders. Being able to create more Goblins that attack is always a threat in the early game. If Squee is your Commander, you won’t have to worry about him being killed too early, which is perfect for those who are looking for fast Commander victories when possible.

If Squee isn’t your Commander of choice, it can still be of some use since it has haste and is hard to keep down. Being able to return from the graveyard is a great ability, and one that keeps pressure on your opponents.

Sheoldred puts a timer on every opponent, sapping their life away as they draw cards. It’s not hard to pair this with other Black spells that force enemies to draw (ie. Dark Deal) that put the pressure on other players. With 100 cards in a Commander deck, each player likely has a way to draw more cards. Sheoldred can either force them to come up with an answer, gain more life, or hope for the best.

If you would like Sheoldred outside of being a Commander, there are several places (especially with blue-black Commanders) where her abilities can see some utility.

Green decks are known for putting out large numbers of basic land cards, and Greensleeves can take advantage of that. While you will need five land cards to play Greensleeves, it can get more powerful if you can put more lands into play. Each land you play while Greensleeves is present generates a 3/3 green Badger token. It’s not the most amazing creature token, but it can add up and it’s not something you easily ignore.

Bringing Aura or Equipment cards into the battlefield instantly is always a benefit, and Danitha puts the pressure on when she hits the battlefield. If you happen to have a great Aura card (like Eldrazi Conscription), putting that on Danitha could put you in an advantageous position for many turns. Even powerful Equipment cards like Argentum Armor work with Danitha, forgoing expensive Equip costs from the start.

What makes it better is that Danitha can repeatedly trigger this effect every time she comes back from the commander zone. While she can only equip Aura/Equipment cards from your hand/graveyard, being able to repeat the effect makes her a consistent threat.

If you don’t have any enchantment creatures, you still have Zur’s ability to turn non-Aura enchantments into creatures, building up a small and dangerous army.

For Commander decks looking to play all five colors, Jodah is a Commander to look at. While it would definitely have to revolve around legendary creatures, it fits well in the Commander format where many of them are viable. Legendary creatures enhancing each other is reminiscent of Slivers, though it’s just a +X/+X boost in this case.

Jodah’s second ability helps with legendary spells (which include anything with the word “legendary” in its typing). You can cast two legendary spells for the price of one, which can help create some amazing combinations early on. Any cards exiled during this process are placed at the bottom of your deck, allowing you to repeat this for a long time.

Just like Jodah, Shanid will require a deck that is filled with legendary creatures. Giving them all menace (which requires two or more creatures to block) is worth the cost. It can put opponents in uncomfortable positions, especially if paired with enchantments or equipment.

While losing a life to draw a card after playing a legendary land/spell doesn’t look appealing, it’s perfect for aggressive Commander decks where you try to destroy your opponents quickly. It can also be mitigated by other means, such as Sheoldred from earlier (who also benefits from Shanid’s effects).

Elas can be a dangerous commander for decks that sacrifice their creatures. Whether you are throwing them at your opponents in combat or sacrificing them, the life loss quickly adds up. You can set up many combinations where creatures die under your command, depriving your opponents of life even without going into combat.

You probably won’t be using Elas for combat a lot (especially since it only has 2/2). But constantly returning from the commander zone will make your opponents worry, especially if you have a way of producing multiple tokens.

If your dragon-themed Commander deck needed a leader, Rith fills that spot perfectly. Giving other dragons you control the ward ability (any spell cast on them is countered unless 2 mana is paid) increases their longevity. It also forces your opponents to consider their next move, and spend more mana than necessary.

Creating more dragons at your end step with excessive damage may not trigger often, but it’s possible to set up some combinations to produce a small army of Dragon tokens, all benefiting from Rith.

Now that you have a list of the top 10 commanders, you can start thinking about using these cards on your own. If you were just looking for inspiration, you might construct a different Commander deck based on the analyses, or include them as non-Commanders where their synergy is the best.