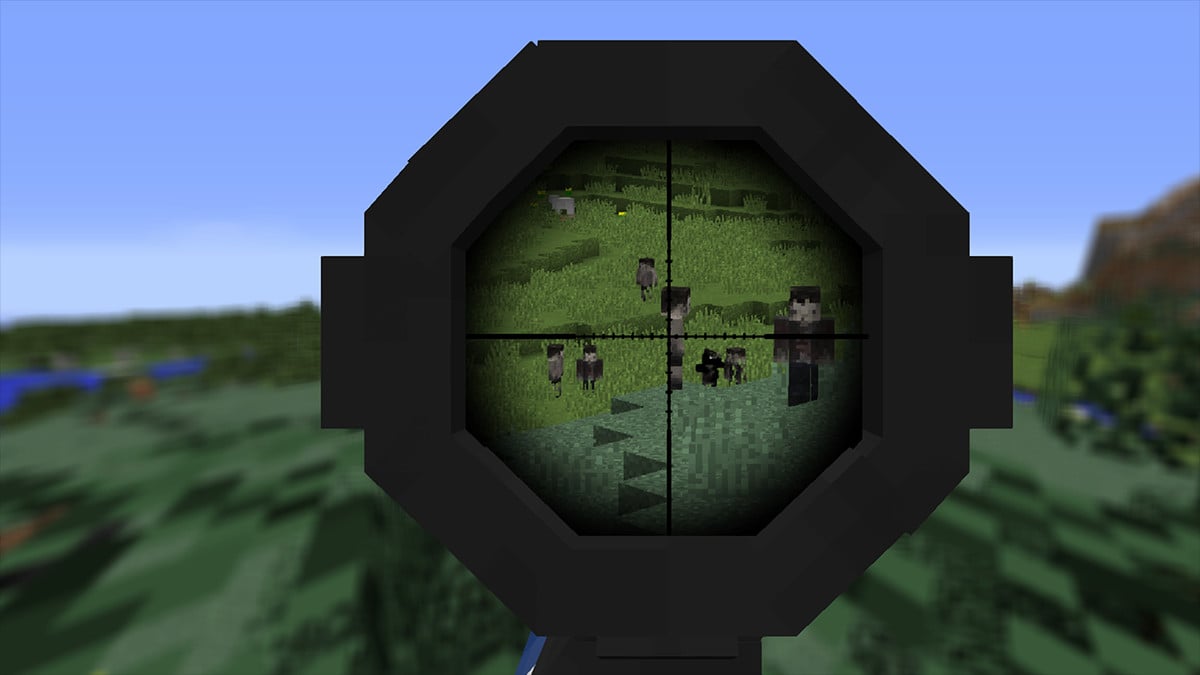 Modding games is just plain fun. Mods are a testament to a game’s longevity and player appeal, and it’s hard not to think of Minecraft when thinking about both. But combat in Minecraft often comes down to simple swords, bows, and the odd pickaxe here and there. That’s where some handy mods can come into play and provide you with a break from the norm by introducing guns to the blocky sandbox. In this list, we’ll introduce you to 10 of our favorite gun mods for Minecraft.

Minecraft Blockfront WW2 is a mod that converts Minecraft’s happy-looking surroundings into a World War 2 battlefield. It’s got a good balance between complete conversion and vanilla-friendliness. In a nutshell, this mod lets you play our WW2-style combat set in Minecraft, with a nice variety of guns to pick from, and some very well-executed graphic and sound effects.

Coming from another game called Alliance of Valiant Arms, so A.V.A. for short, this mod brings that game’s arsenal to Minecraft. These are not very vanilla friendly but will provide with hours of fun and experimentation. A neat feature of this mod is the Gun Crafting Table, which lets you make all the new guns. The best way to use this mod is by leveraging its strengths in multiplayer scenarios.

If you’re looking to simply plug and play with some guns in your Minecraft game, then Modular Warfare mod is an excellent solution. In many ways, it’s very similar to Blockfront WW2, but without all the period bells and whistles. Instead, it provides the same vanilla-friendly quality that you can use to hunt down mobs with some very nice-looking and sounding guns.

We can’t talk about guns in games without thinking about CS:GO. So if you need a bit of CS in your Minecraft, then look no further than this handy mod. There’s even an option to headshot your enemies in true CS fashion, and plenty of weapons have made it, such as the Deagle, the AK, AWP, and more.

While there are some vague magical elements to vanilla Minecraft, what would you say to some magical guns to add to the repertoire? The Elemental Guns mod adds only a few guns, but they are all imbued with elemental powers that all serve specific purposes. It’s a great mod to add to your mob hunting playthrough, with such choices as Fire Gun, Water Gun, or even Explosive Gun.

If you’ve been playing Minecraft for a while, then the name MrCrayfish will sound familiar to you. He has created many popular mods for the game, so there is no surprise that there is also a gun mod in his library. MrCrayfish Gun Mod adds a wide variety of customizable and super powerful guns to Minecraft, with some amazing sound and animation effects.

Combining one more game with Minecraft, we have the Portal Gun Mod, which brings the game’s signature portal guns to the blocky reality. There have been a few variations to this popular pairing over the years, but this one is our favorite. What’s best about it is that you can customize the mod through the config menu, which gives you a lot of freedom in how you use it.

A bit of a grab bag of content, Flan’s Mod introduces not only guns to the world of Minecraft, but also grenades, tanks, airplanes, and much more. Everything is fully operable and practical, which means that your game will not be what you’re used to if you choose to play with this mod. Still, if you’re looking to mix things up, this mod is a great option with many fun features.

For a full-on modern warfare immersion, look no further than Vic’s Modern Warfare mod. This one is a game changer when it comes to gunplay in Minecraft, completely redefining what it means to bring guns and modern weaponry into this world. With the sheer amount of options it gives you, there is also an amazing opportunity for roleplaying with your friends, if you are so inclined, with each taking different gear to define your soldier roles.

The best gun mod for Minecraft has to be the one that fits the best with a normal Minecraft playthrough. Guns Without Roses is a mod that plays and feels like it was always a part of the core game, and that’s an amazing accomplishment for something that could’ve just as easily been game-breaking. Instead, you have to work just as hard to craft the guns and their ammo, you can even enchant them, and is a perfect fit for the typical casual Minecraft experience.