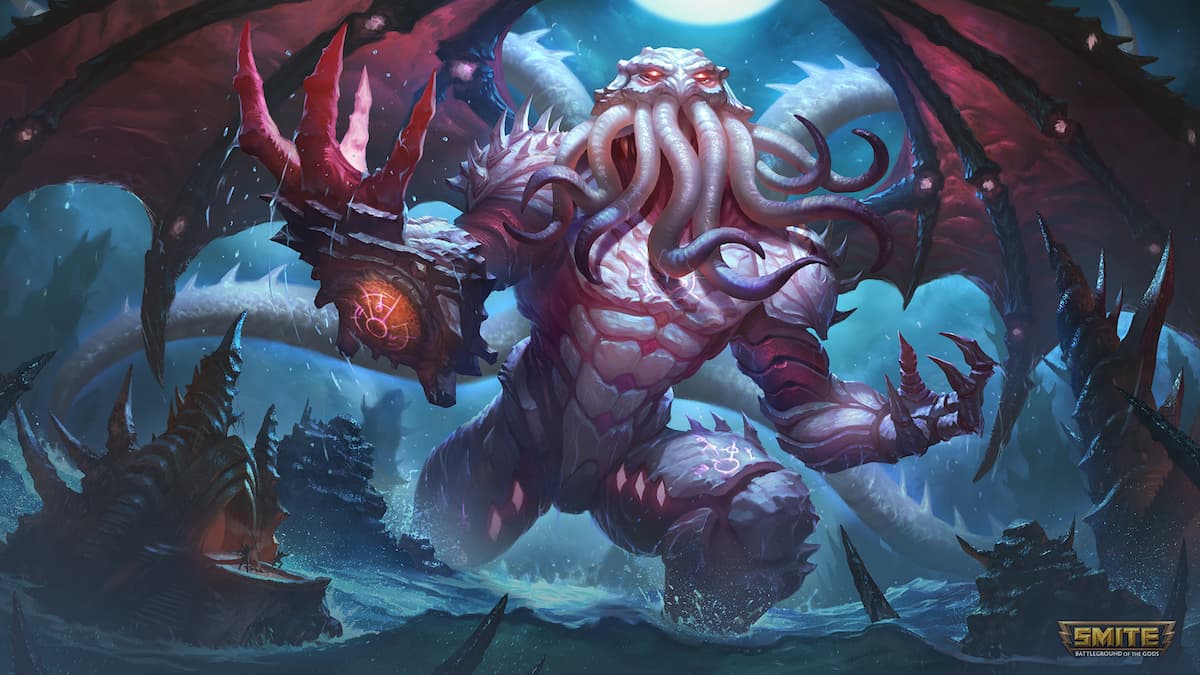 Cthulhu is one of the largest gods in Smite, and they’re a guardian. You’ll primarily see this god in the support role, but you can also choose to use it in the solo lane. It’s one of the more aggressive guardian choices, relying on magical damage to harm its opponents. How you choose to use this guardian will vary on how your team varies, but the more defensive and aggressive you make Cthulhu, the more chaos you can create against the opposing team, breaking the way for your allies.

We’ll primarily be focusing on builds for Cthulhu in the support role, but we will be making recommendations if you have him playing in the solo lane.

Like most guardians, Cthulhu’s first relic will be made to protect the carry. You want to pick between magic shell or meditation cloak. Of the two, more players would prefer if you used magic shell because of how useful that barrier can be at both early and late game. The barrier is powerful enough to block one or two attacks, and that can save an ally at critical moments, which is exactly what most supports are superb at doing. The second relic will vary depending on what your team needs for the late game. If you and your allies need to chase down enemies, go with heavenly wings. When the enemy team has a lot of healing, cursed ankh is a good anti-heal item. Whenever the enemy team focuses you during team fights, shield of thorns will make them think twice.

When you use Cthulhu in the solo lane, your first item should be teleport glyph, just like it is for every player who goes solo. The second option is similar to the ones you’d pick as a support, or you might go with frenzy belt when your team needs a boost of damage for a final push.

When choosing a starter item, the support doesn’t have the most options. Cthulhu will be in the middle of most battles, so you can expect to use war flag or sentinel’s gift. War flag will be the better choice if you want to provide a boost of attack speed to your allies during a fight, and if you plan to stick close to them. You can upgrade it to spartan war flag if your allies chase after you after using your abilities, or you can go with war banner if you stick closer to the front of your allies, acting as a barrier against the enemy team.

You want to go with warrior’s ax for the solo lane as Cthulhu lacks any form of lifesteal. If he has a way to heal himself, especially by being aggressive, he can become a serious threat during the early game and develop into a difficult adversary during the late game when you build into hero’s ax.

There are really only two boot options for Cthulhu. You want to go with shoes of focus or reinforced shoes. Shoes of focus provide a good amount of mana and additional cooldown reduction for you to use Cthulhu’s abilities more often. If you’re taking a lot of damage and fighting it out against your opponents in close range, reinforced shoes give you another layer of physical and magical protections that you’re already building, making it harder to whittle your health down during the early game.

You could go shoes of the magic, the lifesteal, boots, or traveler’s shoes, but we haven’t seen these used too often with Cthulhu.

The items you place on Cthulhu will lean more towards the standard support god, but you also want to throw in some magical power options. Cthulhu’s abilities can quickly stack up, damaging opponents and catching them up off guard. Cthulhu is one of the larger gods in the game, and if you don’t build your defenses, it’s easy for other players to knock you out. You’re an easy target.

This is a general item build we recommend you build for Cthulhu if you’re looking to use him in the support role.

A good majority of players will highly recommend primarily using Cthulhu in the solo role. He’s an aggressive guardian who can thrive in this role, and this is the build we highly recommend you use if you plan to play in it.

If you need additional anti-heal to support your team, you can swap out an item for one of these.

When you want to boost your overall damage even more as Cthulhu, these are some excellent choices to pick from.

Cthulhu can have a massive presence in Smite. We recommend playing him first as the support role to practice and play around with his abilities, but he thrives in the solo lane. He can do extremely well here, especially if another guardian or warrior in the support role can blend with his aggressive behavior. Make sure to communicate with your teammates to get the most out of Cthulhu.