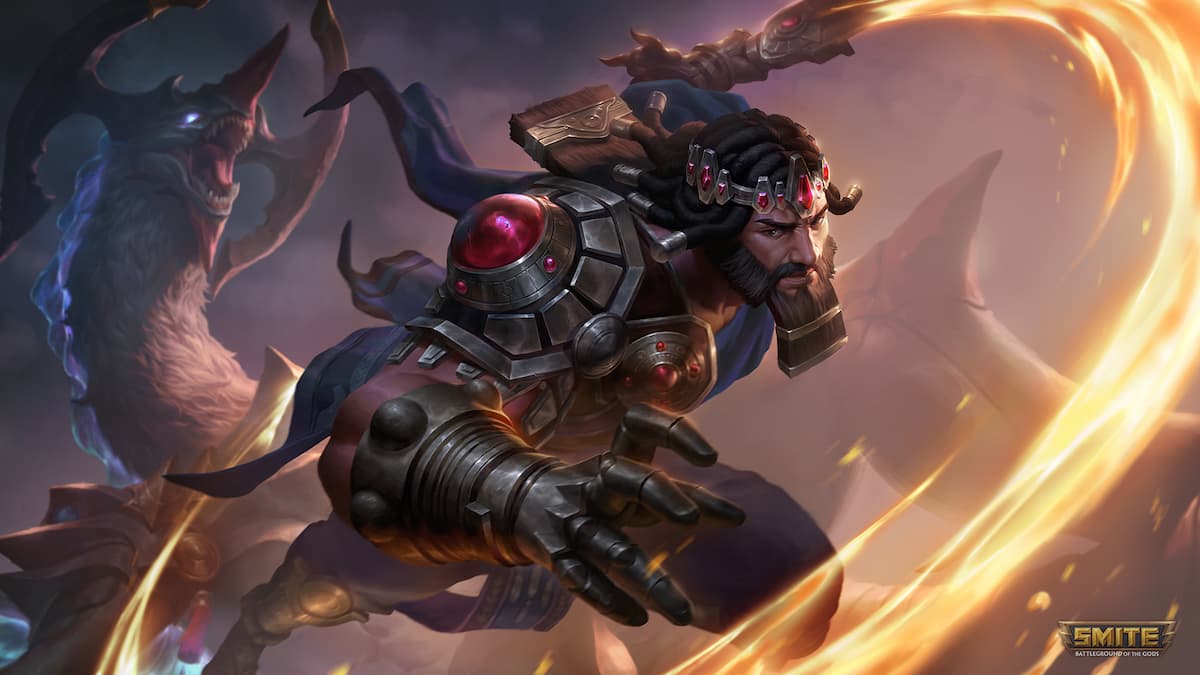 With Gilgamesh’s arrival in Smite, a new Warrior enters the battleground of the gods. You’re primarily going to see Gilgamesh battling it out in the solo lane, but given his abilities and the way he plays, you might see a few players attempting to use him the jungle. This build guide will focus on using him in the solo lane.

When using GIlgamesh in the solo lane, you always want your first relic to be Teleport Glyph. You’ll be using that item to teleport back and forth between the base and your tower. It’s the essential item for most players who operate in the solo lane. After that, the second relic you want to use will vary based on what your team needs.

We highly recommend using belt of frenzy to buff you and your allies during a team fight, purification beads if the enemy team has several CC effects, cursed ankh for helpful anti-heal, or blink rune if you wish to be more aggressive and gank enemy teams.

Gilgamesh can be a tougher god to decide what starter item to use at the start of the game. His first ability, Sun-forged Scimitar, augments his basic attacks, his second, Drop Kick, kicks enemies way and can serve as a lane clear, and his third augments his allies. While you can damage an enemy god with Gilgamesh’s third ability, his second will be his best lane clear to rush through the minions. However, because of how much of a stim Gilgamesh receives from Sun-forged Scimitar, you might want to try using death’s toll or manikin scepter because of how much often Gilgamesh will rely on his basic attacks.

If you’re finding that you prefer to rely on Gilgamesh’s second and third ability to fight in the solo lane and against other enemies, warrior’s axe or bluestone pendant can be good ways to push your enemies back.

When battling against enemies who extremely rely on their abilities, such as King Arthur, consider trying out warding sigil. We’ve had some success with this item in the solo lane, and it boosts Gilgamesh’s abilities as many of them rely on his protections to do additional damage.

Once you’ve chosen your starter item, that will determine Gilgamesh’s boots. For those who are going down the route of using death’s toll, you want to go with Ninja’s Tabi to further boost Gilgamesh’s attack speed. When you’ve chosen to go with warrior’s axe or bluestone pedant, we recommend using Warrior’s Tabi to increase your physical power. The final choice, Reinforced Greaves, pairs will with warding sigil to further boost Gilgamesh’s protections.

When playing as Gilgamesh, we feel he can be a powerful warrior who uses his attack speed buff to turn him into a dangerous bruiser. He’ll be able to fight up close against other enemy gods, and he’ll work pretty similar to Osiris and Bellona. A downside to him is the fact his passive doesn’t really do much once he’s completed both of his quests, and he has all of his items. It doesn’t do anything else for the rest of the game, so you want to lean into his attack speed. Another downside is that none of his abilities heal him, so if you pick attack speed, we recommend making sure Gilgamesh has some form of lifesteal to keep him in the fight longer.

Rounding up everything we know about Gilgamesh, this is a good general build of what we consider a solid item build for him in the solo lane.

If you find that your Gilgamesh needs a little more attack speed, consider picking up one of these items.

When you want to lean into Gilgamesh’s defenses, and turn him into a tough to down god, consider these physical or magical defense options.

These are some of the best options to consider whenever you need additional anti-heal on your team.

Gilgamesh is a flexible god. We believe he can flourish in the solo lane against most opponents. We bet we’re going to see a lot of Smite players using him as an attack speed warrior based on his abilities, and how aggressive he can be by boosting his protections.