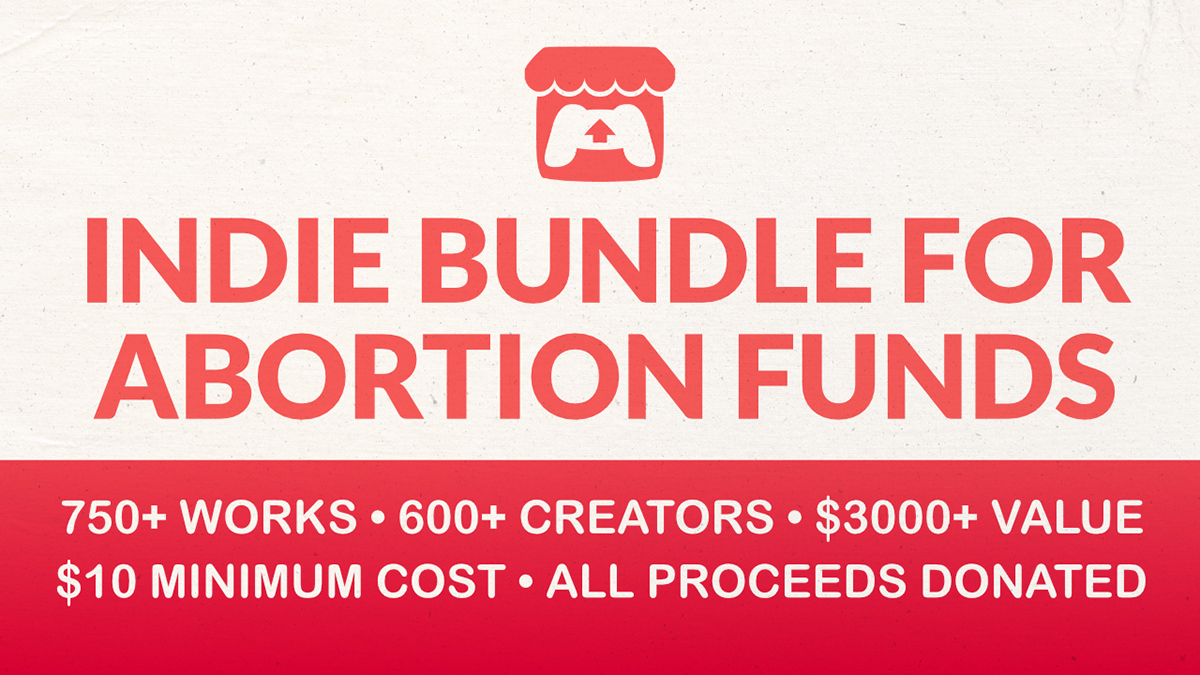 The Itch.io Indie Bundle for Abortion is a collection of more than 700 items from 600 creators that have been put together to raise funds for the National Network for Abortion Fund’s Collective Power Fund. The money raised is used to fund abortion services in more than 20 states around the US, mostly those where the laws around abortion are strictest. This guide explains what the best games in this bundle are, so you know you’re getting a good deal regardless of how much you donate.

What are the best games in the Itch.io Indie Bundle for Abortion Funds?

This list highlights what we believe are some of the best games in this bundle. They’re arranged in alphabetical order and there are so many more than this available to you for as little as $10. If you like the look of any of the games on this list, donate and grab the bundle while you can.

Related: Itch.io raises more than $6 million for Ukraine with its charity bundle

Become: Artificial Investigation is a physical game that you get access to with this bundle. It’s a role-playing narrative-driven title that several people can play at once. Don’t expect any combat with this game, because everything is resolved through tests that you must complete. You’re an artificial entity searching for hidden truths in a simulated city, and nothing is as it seems. You can also purchase a physical version of the game book, but that’s not necessary to play.

Calico is a charming game about rebuilding the cat cafe in a quaint little town. You’ll need to recruit new cats to breathe new life into the business, arrange the furniture, and cook for all of your guests too. While it’s not as highly polished as some other cat cafe games out there, it’s got a playfulness to it that will engross you as you spend time watching the personalities of each and every cat that comes to befriend you.

Cosmos is an incredibly fast and difficult platformer with amazing retro visuals. You need to conquer multiple worlds by passing through each level without being murdered by the myriad of dangers that are present at every turn. Every level has been hand-crafted and requires precision controls to get through. If you’ve been searching for a new platformer to get stuck into, this is it.

Dashton is an endless runner game with PICO-8 visuals that’s just about enough of a game to keep you playing, while not being so much of a game that it requires the level of concentration you’d usually dedicate to a title such as Destiny 2. You run, jump to avoid death, and repeat. There’s nothing more to it, but it’s a lovely way to zone out if you can’t decide what you want to play but know you need to play something.

Decay is a pen and paper game that’s easy to understand and can be played with two or more people. The idea is that you’re a new type of fungal colony, and your goal is to take over an entire town using whatever abilities you have at your disposal. It’s a great combination of horror and comedy with a competitive edge for anyone that’s desperate to cause as much damage as they can to the local population.

Become a volunteer enforcer on the streets of Hypnospace when the world falls into a quiet slumber. Your job is to police the bustling digital world and ensure that everyone sticks to the rules. Since this is the internet, you can imagine exactly how people really behave. The best part of this game is the fake OS and online world, a fully-realized internet with all sorts of sites for you to discover as you explore a strange new world.

Island Maker is a game with a title that does a pretty great job of describing what it is. This is less a game and more of a tool that you use to generate islands based on certain parameters that you define. First, you select or create the seed for the island, then you can start placing the people and watch them thrive, or not as the case may be. There are game rules at play that you’ll learn as you go, requiring you to place houses, food, and windmills in specific areas to make the most of them.

A stealth action game that took Steam by storm when it was first released, Not The Robots tasks you with eating furniture and not getting caught. You’re a robot, but no one likes a robot that eats their chair. The game has randomly generated levels with roguelike elements and permadeath, so your run comes to a close as soon as you’re caught. This title alone has a lot of replay value and will keep you entertained long after you’ve purchased this bundle and are working through every game in it.

Potion Commotion is a fast-paced game about growing plants to gather resources and eventually make potions with unique abilities. Each new potion you make or plant you discover recovers pages from your master, who has many tidbits of information to add to your knowledge of your garden so you can make even better potions in the future. If you enjoy light puzzle elements and a lot of gardening, this is a game that’s going to tickle a lot of your fancies.

Safe Robber rounds out this list but is by no means the final game in this bundle. It’s a small puzzle game about stealing safes from houses while adhering to certain gameplay rules. This makes each house more of a puzzle to solve than a sandbox for you to explore and emerge with riches from. Anyone looking for a new twist on the puzzle game genre will find something they like here.