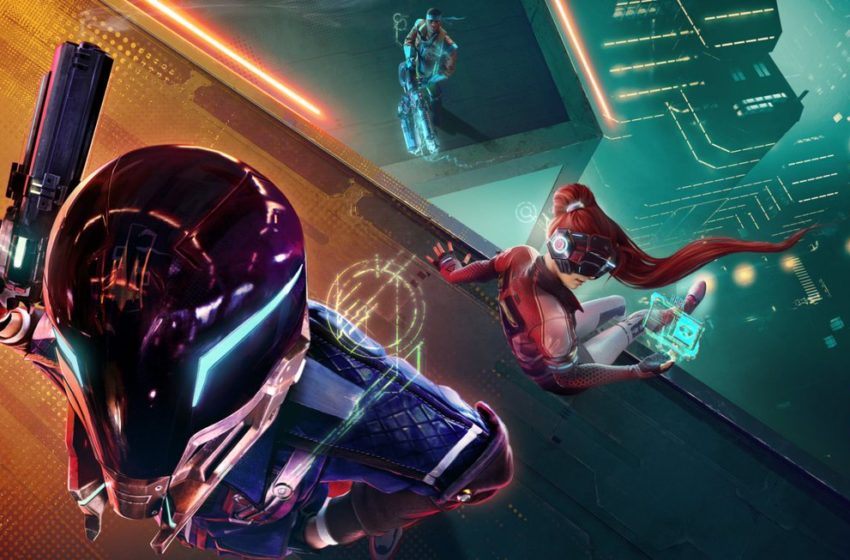 Patch 1.1 of Hyper Scape will provide a few heavily requested changes. From aim assist to sniper damage fall-off, this update brings some much-needed balance to a few important weapons. With that in mind, we’ve adjusted this list based on the changes. Here are the best guns in Hyper Scape.

What used to be (arguably) the most overpowered weapon in the game received a few nerfs in this patch, making it much easier to counter. The weapon will still be one of the best available on the battlefield, but it now has damage fall-off and a lens flare.

As Hyper Scape players know all too well, the Protocol V sniper rifle is completely hit-scan with no bullet drop. This means that prior to this patch, a player could be shot from anywhere on the map in the head with a fully fused Protocol and they’d die in one bullet. It was a bit frustrating and one of the most common complaints the developers received.

With this new patch, however, the Protocol will have damage falloff at over 150 meters. The lens flare simply means light will shine when you look at a player scoped in with the Protocol V, alerting you of their weapon and allowing you to make the proper moves to move to safety. These nerfs are not enough to make the Protocol bad or not worth picking up, but it is certainly helpful in trying to deal with a player using one.

The Mammoth shotgun has received a nerf to its base damage as well as fused damage, but it’s not enough to make this a bad weapon. As far as precision weapons go, this would be the last choice. The shotgun is already limited to close range, and now it will not 1-hit kill up close when it is fusion 5, as it previously did.

The damage for the shotgun has been changed from 5/5/5/5/7 to 4/4/4/4/5, meaning the max damage is now the previous base damage. While still highly effective in buildings and when finishing an enemy off who’s already injured, the shotgun loses a lot of value by not maxing out at 7 damage per hit.

The close-range headshot with a fusion 5 Mammoth was the most valuable attribute of the weapon. However, the shotgun received a buff to the magazine size, and will now have 6/7/8/9/10 as opposed to 5/6/7/8/9. So at the very least, you’ll have a few more chances at hitting your target before reloading.

The Riot One pistol is the most versatile precision weapon available, capable of extremely high damage output very quickly if the user’s aim is up to the task. This nerf simply lowered the damage across all levels of fusion, from 26/28/31/34/38 to 25/27/29/32/36.

This should not change too much for players who use this weapon. High-level players aim well with the Riot One, hit headshots, and use it for a finishing weapon to their full-auto or explosive. They’ll still be able to do this effectively, and the Riot One is still one of the best weapons in the game.

The Hexfire is getting a magazine size nerf, which was the most needed update in all of Hyper Scape. After the beta nerf of the damage, the only thing left was for players to reach fusion 5 and spam 270 bullets at everyone they see. Now the gun will max out at 180, starting at 100, making it take slightly more skill to score a kill. Gone are the days of spamming at a doorway until someone walks through, gone are the days of spamming at the sound of an invisible player waiting for them to reappear.

The Hexfire also received reduced overall aim-assist for players using a controller, as it was broken previously giving them a slight aimbot when using the weapon. These are welcome changes and significantly reduce the value of the Hexfire. Its strongest attribute is still the clip size, and it will pair well with a precision weapon or explosive.

The Harpy received no changes in this update. Being one of the best weapons in the game already, this small and mobile SMG becomes even better with the nerfs to the Hexfire. Now in close quarter battles a player with great aim will be able to out damage and move a player with a Hexfire. Winning those fights will be more satisfying than ever.

The Ripper assault rifle received no changes in this update either, meaning just like the Harpy it remains one of the most sought-after weapons on the battlefield. With a combination of being fully automatic and having high damage output and good range, the Ripper is a great gun in any situation. With this patch, it’ll be more viable in a fight against a Hexfire and even be effective in repelling a sniper at distance.

The Salvo was previously one of the most-used weapons in the game due to its ability to spam grenades indoors and destroy everyone in sight. Then it received a heavy nerf to reduce that close range damage and stop the spam. Now, Ubisoft says it is “by far the least used weapon currently, and we feel it has a lot to do with its unpredictability.”

Thus, the Salvo has received a slight increase in detonation radius from 0.65R to 0.7R, as well as a reduction to grenade bounce by 20%. With a bigger explosion radius and a nerf to the unpredictability of the grenades, the Salvo instantly becomes a more useful weapon. Now, like the Komodo, the grenades will require accuracy and skill instead of random luck. The Salvo instantly becomes a great explosive option, especially when fighting indoors or just in the early game when players are less equipped.

The D-Tap received no changes in this patch and continues to be one of the best weapons in the game, especially for lower-skilled players. The D-Tap is a pistol that literally gives the user aim-bot. Whether you’re moving quickly and just want to put some damage onto someone, or the player is running away from you, the D-Tap is a great option to make sure you’re hitting those shots.

It’s also a fantastic option to back up a fully automatic weapon or explosive to hit an enemy with those last few shots when they are low on health and trying to escape. Hyper Scape is full of people who love to run away with movement abilities and turn invisible, and the D-Tap helps to easily take care of those.