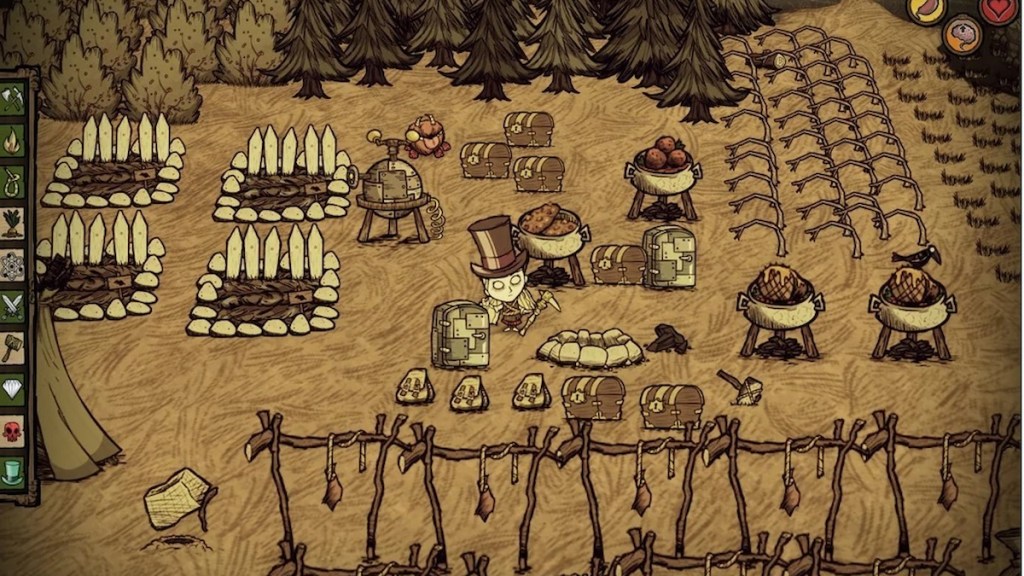 Everybody wants to find a lovely home, and it isn’t any different in Don’t Starve. Choosing where to plant your roots and put your base is a big decision in Don’t Starve and will significantly affect whether or not your playthrough goes well. Your base is where you will do things like sleep, store food, farm, and keep your items, so its location will determine how much time you will spend running back and forth.

The two main factors you must consider when placing down a spot to house your base are what resources/facilities are already around you and how long it will take to get to the things you need. A bad spot for a base is far away from resources such as food, grass, boulders, etc. You want to spend the least amount of time walking to where you need to go and more time collecting resources, farming for food, fighting mobs, and working on your base.

When scouting the world during the first few days, you want to look for areas with lots of natural resources, especially food types like berry bushes, beehives, hollowed stumps, and ponds. You don’t want to look for food continuously; you want it to be close to home and use it to make better recipes. Yes, you can dig up berry bushes and place them near your base, but that takes time and requires a shovel and some nutrients to revitalize them after being dug up. The same goes for beehives. You’ll have to destroy them to build your own bee boxes to harvest honey. If you don’t have to travel across the map to harvest food, then you have time to focus on something else.

Being close to other resources like grass and rocks is also essential. If you’re close to a savannah biome, that means you’ll have an abundance of grass and rabbit holes to catch food. You can dig the grass and plant some near your base (and you eventually should), but if it’s so close that you don’t need to, that’s even better. Being close to the rockyland biome isn’t as important, but boulders with gold veins are extremely helpful as gold is used in several science structures and improved tools.

The best place to put your base is the grasslands biome or the deciduous forest biome. The grasslands biome will have lots of trees, berry bushes, grass, twigs, flint, rabbit holes, and bee hives. No aggressive mob usually spawns on grasslands, so it’s a good safe zone, and there’s a lot of free space generally if you need to place down structures.

Deciduous forests are good as well because they have catcoons that live in hollow stumps. Catcoons can be easily killed and always drop meat, which can then be cooked in a crockpot with berries to make meatballs. These forests usually have a lot of mushrooms growing in them, which can also be used in a plethora of crockpot recipes.

The final place to best put your base is in a pigman village. These are usually located in grasslands or deciduous forests and are surrounded by naturally spawning resources. Pig villages can have lots of berry bushes, flowers, grass, and pig houses. Being near pig houses is important because they attack hostile mobs like spiders or hounds, so they act as added protection. It’s also next to the Pig King, who has an infinite supply of gold if you provide him with meat. The issue with settling in a pig village is that they can often be in the far corners of the map, far from other biomes and resources.

Since the world of Don’t Starve is randomly generated, it’s up to you to determine where is best to place your base. Sometimes, you may come across a patch of land with a fantastic set piece that is perfect for you to hunker down at. Finding the ideal home will make your time in Don’t Starve much easier.