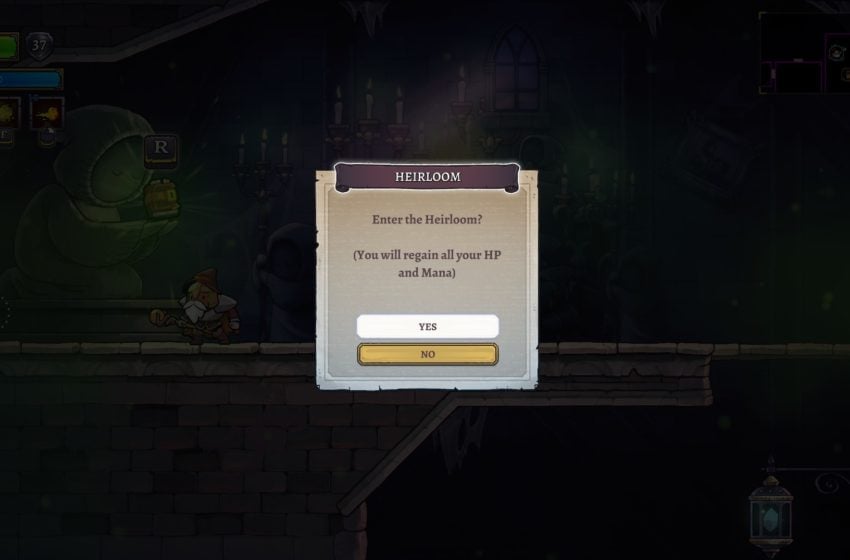 When roaming around the kingdom in Rogue Legacy 2, you may live long enough to encounter a strange statue at the top of a large room that you have to spinkick your way to the top. The statue is holding a peculiar book in its hand. There’s a strange voice that speaks to you, offering you the Power of Empathy if you can pass its trial. Should you choose to accept, the statue restores your health and mana, sending you into the test. You have to compete against its tricks to make it to the end.

The Power of Empathy is a random spawn and something you have to find while exploring the kingdom. There is no exact location for it.

When you first arrive in the trial, you want to make your way to the bottom of the tunnel. When you reach the bottom, there’s a small illumination of blue power you can interact with. It hints that the room is giving you two choices, but hides a third. If you run off the edge of any sides of the pillar, you return to the middle. You have to push down and jump down where the blue power is, and you will go to the next room.

In the second room, jump up the walls until you reach the next blue power scroll you can interact with. Speak to it, and it tells you how an elder suggested using obstacles as hidden opportunities. You need to wait for the flying metal pendulums to rotate to the correct angle for you to spinkick them to make it up to the next platform. You will have to do this four times before reaching a large circle of these deadly metal pendulums.

There’s a small area where there’s a gap, allowing you to spinkick inside of it. Wait until it’s on the left side of the room to try and jump to use its momentum to reach the next platform at the center of them. Wait for the gap again to make it to the top.

The third room has you use the spinkicks to hit the lanterns with the green crystals inside until you reach the next blue scroll. Interact with it to learn that there are nightmares ahead. These nightmares have a distinct red aura surrounding them. If you try to attack or use your attacks while in their aura, they immediately fire at you.

The best way to do this is to use the spinkick on the doors, and then move from where you were standing. To do this, jump a little bit in the air, push into the door, and activate your spinkick. The nightmares should turn to you to fire a lightning bolt. It’s a bit easy to dodge, but as you move through the room more, these red auras stack up, becoming increasingly difficult. Make it until the end, and there should be a new blue power source you can interact with in the middle of two nightmares. It teaches you to reach the nightmares and interact with them to disable them, enabling you to hit the door without attacking you. Proceed the next series of doors until transporting to the next room

Fighting in the nightmares

The fourth test has two nightmares on either side of the room and enemies spawning in. You have to turn off the nightmares to attack the enemies. You can risk fighting the foes before turning them off, but you likely will find yourself being hit by them. If you have any ranged magical spells, try turning off a nightmare on one side of the room and hitting your opponents from afar.

Next, two nightmares are covering the entire room and skeletons on both sides of you. Should you move, the platforms below you immediately break, and there spikes on the bottom. Try to break the platforms where the skeletons are standing to make them fall, keeping yourself away from the spikes. Two more skeletons spawn in the middle, and you have to repeat the process.

After beating the skeletons, you teleport to another room where you’re repeating the same process. This time you are against sword guards, and you need to break the platforms under you to make them drop. There are two on each level. Wait until the previous platform above you spawns back in, and then jump up and cause the guards to fall to the next one. Repeat the process until they fall to the bottom and hit the spikes to kill them.

The final room features two ghosts that spawn on both sides of the room. Jump into the air to try and hit the nightmare in the middle of the room, and then take them out. They fire a blast of magical attacks, so don’t be too close to them when they attack. After they die, two sword guards show up at the bottom. Turn off the nightmare again and repeat the process. The final fight pits you against a pair of soul axes, and by now, you should know what to do.

You will teleport to the final area where you can claim your new ability, the Power of Empathy. You can read Aesop’s tome to access the memories inside.