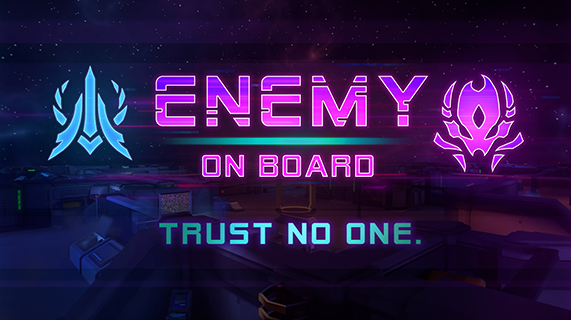 Enemy on Board is an upcoming top-down sci-fi shooter by Windwalk Games. The developers of EOB have worked on games like League of Legends, The Elder Scrolls: Morrowind, and Garry’s Mod, among others. With this kind of background, it is no surprise that there are high expectations for EOB.

The dev team is doing a good job meeting those expectations with a fun, casual game that can be both thrilling and great for just killing time. The developers are passing out keys to access an early version of the game at random via their website and the game’s official Discord channel, with more players being added with each round of testing.

Here are some quick tips for new players that get their hands on and access key for one of the testing periods.

Friendships mean nothing in EOB. Anyone can be an alien in this game and there is no way of knowing who it is unless you see them transform. Treat everyone with caution and suspicion. Going with another player alone to repair a generator makes you an easy target to alien players if there are no witnesses around.

Team up with cyborgs

Near the end of each match, the aliens are forced to transform and the cyborg stations are unlocked giving players the chance to turn into cyborgs. The cyborgs have much better weapons such as swords and rifles for handling aliens. Even though the cyborgs are much more dangerous to aliens they are not invulnerable. If you are not a cyborg team up with them and move in groups to take down the aliens or to cover everyone’s escape.

When playing as an alien, a common strategy near the end of the game is for one or two players to stay near the escape pod to pick off any weakened humans trying to run. The best way to counter this is to place a ton of traps around the exit. The escape hatch is in the same place every game so far so if you have seen it one you know exactly where it is going to be. Place traps all over the hallway leading up to it and keep a stun gun handy so you can slow down aliens and guarantee an escape.

As the combat phase begins to approach start placing traps in the doorways of the common areas. Coordinate with your team so you can slow down the aliens if they transform early or if they try to tag-team you after the cyborg stations become available. Molotov Cocktails can also be useful for this. Coordinate with your team to lead the aliens into a room like the armory, drop a molotov near the doorways, then trap the doors are hit them with the stun gun if they try to get away. You won’t do a ton of damage but it will help whittle them down a bit.

Hang on to the stim serum for emergencies

It is easy to get trapped in a corner by an alien player, especially in some of the smaller side passages. If you pick up a stim serum, use it to get away and back to the armory or repair room. If you happen to see the and alien transform, try to make note of their name to pass on to your team. The serum is particularly useful if you are low on health and need to get away and find some bandages.

Watch where you are throwing

Ghosting is an annoying practice that ruins the experience. If you are in a separate chat with other players and get killed, don’t immediately out who killed you. This just takes away from the fun of the game.

Use the armory and repair room to your advantage

Players generally congregate in either the armory or the repair room waiting for the next generator objective to start. This makes it the perfect place to get evolution points for infestors. Use the infection ability in these contained spaces to get the most points to use later. It is harder to discern a single alien in a room full of pink mist. This tip is actually in the tutorial, but while playing in one of the recent beta periods I saw a lot of infestors give themselves away by brushing up to and infecting a single player.

If you are playing as an infector, infecting a single person is a dead giveaway. If you are alone with another player, they will know you are an infector the moment they see that pink mist after you have infected them. Unless you kill them quickly before or after you infect them they are bound to try and tell their team. The opposite is true if you are a leech. A lot of the time players will end up on generator repair points by themselves or with one other person. This makes them the perfect target for leech powers. The pink ray that appears when you leech a victim isn’t visible to them. Other players can see this ray so targeting lone players is the best way to go.

Egg the hallways and generators

There are a lot of narrow side passages that are perfect for Spiders to place eggs because players will run through them blindly either to get to a generator or to run away from an alien. Because these side passages are so narrow most players won’t just walk right past your eggs earning you some easy evolution points. The same can be said for the areas around the generators. There are four rounds for generator repair with short breaks in-between. Use the breaks to peel off from the group and place some eggs. Luckily the animation for laying eggs isn’t terribly obvious.

Early in the game players will have some decent equipment but nothing terribly powerful. Once players get access to the armory they become much more problematic. This is only compounded when the cyborg stations come online and everyone has the chance to transform into the more powerful cyborgs. Transforming as early as possible can give you the chance to overwhelm and kill or weaken a few players before they get access to the armory. That said, it will also make you a target so just hit one or two then find a quiet place to hide until you turn back. Aliens will transform during the combat phase near the end of the match anyway so hanging on to evolution points until the bitter end won’t help anyone.

Communication with your team is critical in this game, especially for the aliens. If you and another alien have enough evolution points saved for both of you to transform, do so. Keep in mind that transformations only last 15 seconds so find a hidden place close to where the players will gather like the repair room or escape pod. Fighting off two aliens is a lot more difficult for a group of players than just targeting the one.

Keep an eye on the clock

Time is everything in EOB. Matches go by quickly and everything is very fast-paced. Transformations last 15 seconds. If you change back before you finish off a human or anywhere a human can see you, you will immediately become a target. There is a timer at the top of the screen that shows each phase of every match. These phases do not last long and challenges will need to be completed quickly or everyone loses. Keep an eye on the timer or the armory opening and the combat phase will sneak up on you. Getting caught by surprise when the cyborg stations become available will almost guarantee a loss for you.

Their armory is your armory

Players are always whacking each other while trying to figure out who is an alien and who isn’t. If the armory is open and someone hits you, hit them back with something a lot bigger. Just because you are an alien doesn’t mean you can’t jab someone with the vaccine or use shivs. You can damage them and if anyone says anything you can claim self-defense then go use some bandages. You can also exhaust some of the resources like bandages and molotovs that will make combat a pain later.