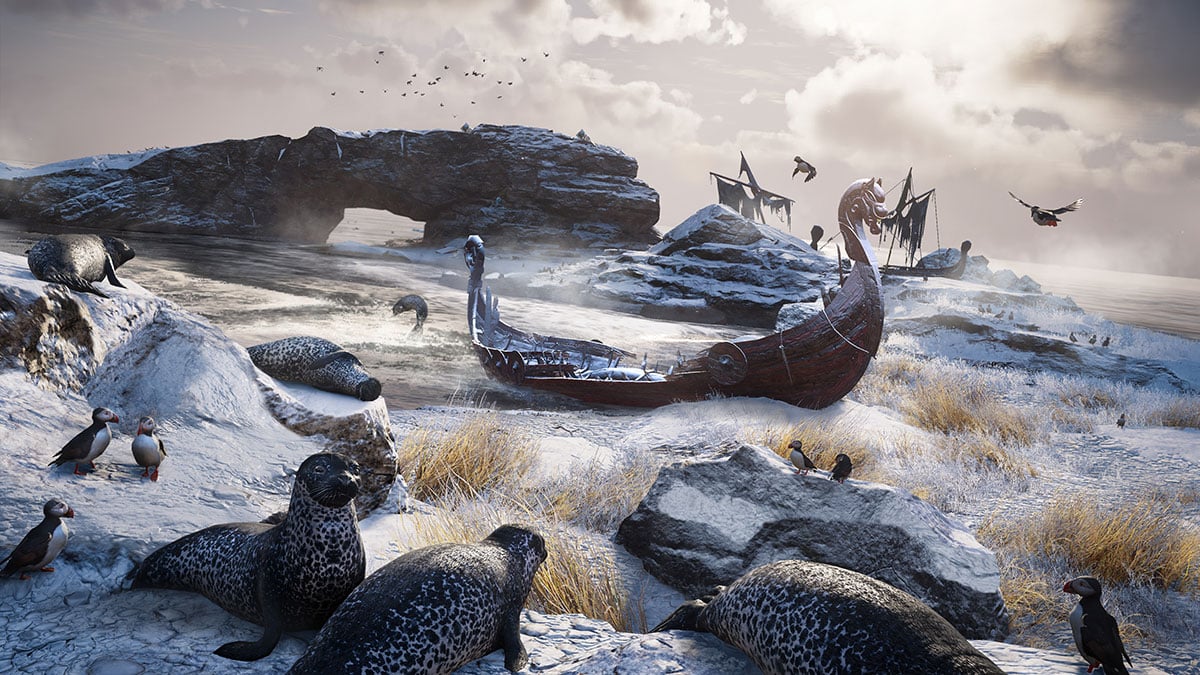 With everyone couped up indoors for the better part of a year, many aspects of day-to-day life have taken a strange turn. One of those aspects is music, and in the U.K., everyone is currently obsessed with seas shanties. Some of the best shanties can be found in video games — some that you wouldn’t even expect — which is why we’ve put together this list of the ten best sea shanties in video games. These are ranked by how accessible they are to newcomers to shanties, with 1 being the easiest to get into and 10 requiring some effort on your part to appreciate.

10. Through the Storm – Assassin’s Creed Odyssey

There are going to be a few Assassin’s Creed entries in this list, mostly because the series does such a good job of nailing them and their presentation in each game. Our pick of the best shanty from Assassin’s Creed Odyssey has to be Through the Storm, a song that your crew will be singing from the time you pick up your ship. However, it’s not just how catchy or enjoyable the song is that makes it great — it’s the history behind it.

Through the Storm is a poem written by Alcaeus written in the Lesbosian/Lesbian dialect. Alcaeus became so famous that his name is used to describe the form in which this poem and others take. While some songs in the game are taken from later time periods, this one feels fantastic because it’s true to when Kassandra herself was ripping through Ancient Greece.

9. The Curse of Monkey Island – Pirate I Was Meant to Be

Despite how old this game is, it’s still got one of the best sea shanties we’ve ever heard. After solving obnoxious puzzles for hours on end, hearing this absolute nonsense is a real treat. Not many games have shanties written specifically for them, which is why this one stands out from the rest as one of the most unique.

Okay, so this one isn’t technically a sea shanty. However, it’s regarded as one of the best songs in a video game that forms part of an important mission or scene on or near a beach. You’ll hear Scattle in the Dead Ahead scene. It’s not exactly relaxing, but in terms of the rest of the game’s soundtrack, it’s definitely more chilled.

There are no less than 49 shanties and songs in Assassin’s Creed Rogue. By far one of the best is The Bonnie Lass O’Fyvie. Not only is this shanty still sung by groups today, but it’s also gone on to inspire new original music from artists such as Sam Kelley. We’d argue that Rogue has a better range of shanties than Assassin’s Creed 4: Black Flag, but some of them are pretty terrible all the same.

The Witcher 3 is filled with strange and sad people, and Octo of Undvik is no exception. He was the Jarl of Undvik until Myrhyff, an Ice Giant, overtook it. When you encounter him, you’ll hear about his sad tale. You may also hear him singing this tragic shanty.

Assassin’s Creed Valhalla can be a frantic experience if you spend all of your time looting and murdering. However, spend a little more time sailing the rivers of Saxon England with the Skaltic Songs (shanties) playing, and you’ll start to see a more relaxing side of the game. As with Assassin’s Creed Odyssey, some of these are historically accurate, and some are taken from a later time period. All we know is that hearing this song and watching a sunrise from the river is a beautiful experience.

4. The Sea it Rises – The Elder Scrolls Online

The Elder Scrolls Online is a game that has pretty much everything, including sea shanties. The Sea it Rises is a poem that you’ll come across in your adventures through Phynaster’s Stride. It’s a song that’s sung by bards in the world of Tamriel. Unfortunately, we can’t find a sung version of it, so the lyrics will have to do.

The sea it rises with a mighty roar
The wind it blows from a distant shore
The waves they speed us on our way
The ship she dances in the spray!

All hands to halyards, hoist away!
Set sails to full and no delay!
The course we set we must sail true
Or sink ourselves in the briny blue!

Look to the port above the beach
Our destination we will reach
For our captain’s is a will of steel
Break his trust and you’ll kiss the keel!

The sea it settles on the shore
The wind will blow us nevermore
The waves are calm, there is no spray
Our ship sets sail some other day.

There are some truly cracking shanties in Pillars of Eternity 2. It’s just one small part of what makes the game’s charm suck you in for yet another 100-hour playthrough. Deadfire Lines is one of the first shanties you’ll hear in the game, but it’s also one of the catchiest.

2. The Longest Johns – Sea of Thieves

While Sea of Thieves has some great tunes you can play, it’s the community that makes this one of the best titles for sea shanties. We’re not sure just how many of you get together to sing shanties regularly, but The Longest Johns, a Bristol-based folk group, have gained a name for themselves for doing exactly that through livestreams. The group gets together to play Sea of Thieves and take donations for song requests, covering all kinds of folk songs and sea shanties. Of course, they promote some of their own stuff along the way too.

This is the sea shanty that introduced most of us to their existence. Back in 2013, when we loaded up one of the best Assassin’s Creed games in history, the crew of the Jackdaw belted this out the first time we sailed on the open seas. To this day, there’s nothing that compares to that anticipation of a wide world of secrets to uncover and ships to destroy with a crew of hard-drinking sailors at your back.

This list couldn’t be complete without one amazing discovery we made while researching this article. An artist called melloforge has created a small album of sea shanties inspired by retro games.