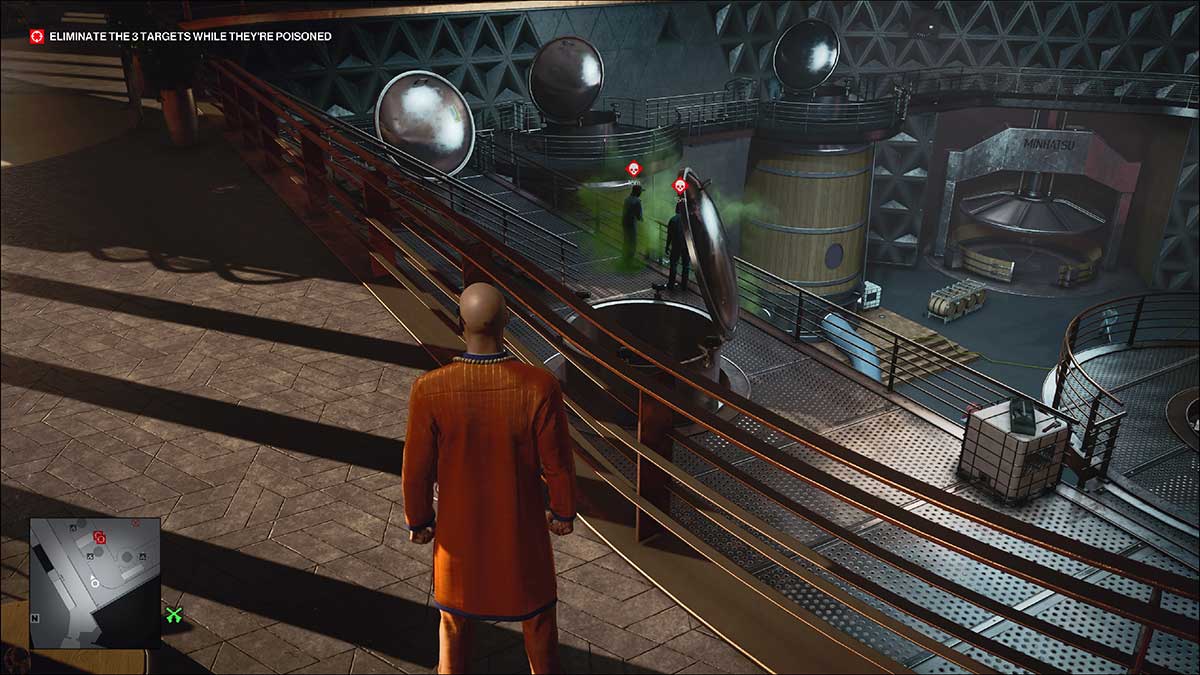 In Hitman 3, players can choose from one of the widest selections of weapons in the Hitman franchise history. From sniper rifles to rubber ducks, the game does have it all. In this guide, we will cover the 10 best weapons Agent 47 has at his disposal in Hitman 3.

Before we get into the list, let’s clarify a couple of things. First, this list covers items that players can equip Agent 47 with during mission planning, including weapons that you start a mission with or can pick up from Hidden Stashes within a location. As a result, this list doesn’t include items Agent 47 can pick up and use as weapons throughout the various locations he visits.

We’ll start at the bottom and work our way to the top, with each weapon ranked in terms of how useful it is in taking a target down, not necessarily how lethal it is.

Kicking things off is this incredibly unique grenade added to Hitman 3 with The Gauchito Antiquity Escalation. Agent 47 can throw this close to a single enemy or group of foes. After a second or so, the device explodes, emitting a poisonous cloud that causes everyone caught in the blast radius to suffer the effects of emetic poisoning. Forcing them to head to the nearest receptacle and puke their guts up.

The best thing about Guru’s Emetic Grenade is that it focuses all nearby NPCs’ attention, ensuring that every nearby target is caught in the blast. Every single one of those afflicted by the cloud will also then become extremely vulnerable. It’s a fantastic tool for setting up all kinds of mischief, particularly if you’re aiming for a Silent Assassin rank.

An understated item in Agent 47’s arsenal, this Micro Taser can be used in both a lethal and non-lethal capacity, doubling its effectiveness. If you want to subdue a target at a certain point in their patrol, attach this to them and activate it as and when you see fit. If you need to kill a target using electrocution, though, you can throw this into a conveniently placed puddle and watch your target fry by activating it as they walk across that puddle. The beauty of this weapon is that you can activate it anywhere, so if you’ve got the timings of an NPC’s patrol mapped out in your head, you can dramatically cut down your mission times.

Emetic Poison is Agent 47’s bread and butter. Once someone has ingested this stuff, they need to head to the closest toilet or bin throw up. It’s a great way to isolate targets from any bodyguards they might have. With the Emetic Poison Vial, you’ve always got that poison on you. It opens up opportunities for poisoning targets by setting them up well in advance of where their patrol takes them. This item was handy in The Deceivers Elusive Target.

We’ve all used it. It’s Agent 47’s most basic weapon, one that he’s well-known for. The Fiber Wire is so iconic that there’s a challenge associated with it in every location in Hitman 3. The most useful aspect of this weapon is that Agent 47 can carry it anywhere. It’ll even get through frisk checks, providing a convenient lethal weapon to use when you finally close in on a target. It’s the fact that this weapon is so versatile that it lands a spot in this list. It might not have much range, but it does take a target down and get Agent 47 into the dragging position all in a single movement.

Some look at the Explosive Golf Ball and see a weapon fit for a very specific kill. Agent 47 looks at it and sees all manner of possibilities. While it’s true that this weapon forms the base of two story mission kills for golf-loving targets, it’s also an extremely lethal device that can pass by undetected. Agent 47 can equip this, and no one will suspect that he’s up to something. Once thrown, this weapon causes a fairly sizeable explosion that kills whoever it hits. This is the perfect way to get an explosive kill on multiple targets without anyone seeing it coming in a pinch.

This weapon is one of the more unconventional remote explosives in Agent 47’s arsenal. This device won’t be seen as lethal and doesn’t get detected upon being frisked. It can then be thrown or dropped and left until you decide to blow it up. Since it’s not what you’d expect to see outside of the bathroom, NPCs have a habit of picking this item up. Therefore, it’s the perfect thing to drop in the path of an unsuspecting target.

Now we’re getting into the most useful weapons in the game. The Lethal Poison Vial gives Agent 47 a single dose of lethal poison to use on a target. This works best in the case of targets you know will be drinking something, such as an expensive glass of wine. Once the target is dead, the kill is considered an accident, meaning you can use the poison in Silent Assassin runs without ever needing to hide the body.

While it isn’t lethal, this weapon is perfect for taking out pesky NPCs who are getting in the way of a Silent Assassin run. Sometimes some NPCs simply won’t leave your target alone. In the brief window of separation between them, this ensures that you can subdue the target without needing to be too close to them.

Agent 47 has a few sniper rifles at his disposal, but none come close to the style and efficiency offered by The Golden Dragon. This weapon is unlocked through The Lee Hong Derivation Escalation and looks brilliant. The weapon has a suppressor, so NPCs won’t notice you using it even if you’re in the next room. Rounds pierce through targets, meaning you can kill two targets with a single shot. It also has three levels of zoom and provides you with the power to briefly slow the time when you’re lining up a shot by half-pressing the trigger.

Agent 47’s signature ICA Silverballers has been expanded into various pistols throughout the last three Hitman games. Each one offers you the power to do one thing, kill a target from a distance without creating a huge racket. In many cases, this isn’t that practical since other NPCs surround targets. However, the pistols come into their own in those unexpected moments when a target is in a room without anyone else, and you can get a clear shot at their head. They’re also the perfect way to destroy cameras without anyone noticing.

When the going gets tough, Agent 47 has a pair of hands that can do anything. If he gets close enough to a target, he can subdue or kill them. When he’s confronted, he can fake surrender and take out the guard who thinks they have arrested him. These hands have taken hundreds of lives, and Agent 47 can use them with a level of precision that no other human is capable of. Their versatility and dependability are what make them the best weapon you could hope to take with you into a mission. As long as you’ve got the option to use them, no target is safe.