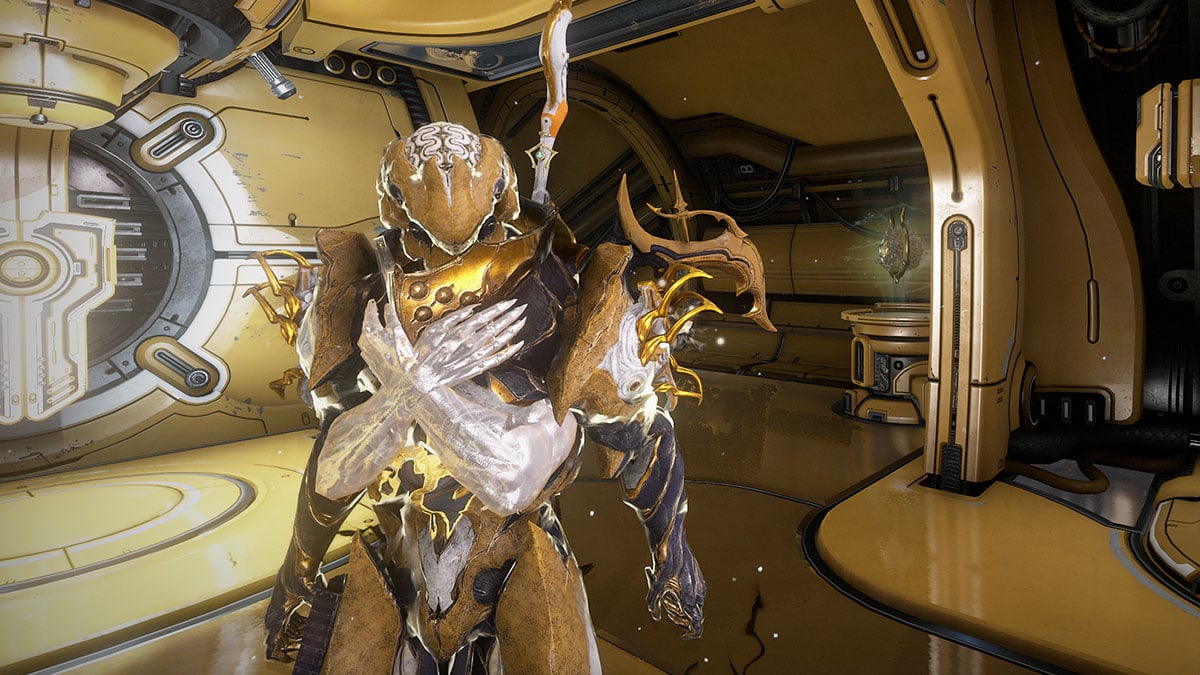 Infested Salvage is a unique mission type in Warframe that only occurs on a single node on the Star Chart. You will need access to Eris, and the Oestrus node to be able to take part in this mission. It plays out on the Infested Ship tileset and is a Level 34-38 mission against the Infested faction.

During this mission, you need to power three different machines on the map called Vaporizers. When a Vaporizer is active it will emit a small shield, and the diameter of the shield will grow at each level of charge.

The idea behind the mission is to keep the Vaporizer charged enough that it will cover a nearby console, allowing the Lotus to hack into the ship’s systems to retrieve important information. The field the Vaporizer emits also acts as a safe area that the players can stand in, as the environment in this level is caustic, and will burn through your Warframe over time.

To power the Vaporizers you need to get Antiserum Charges that dropped from slain enemies. You can run over them to pick them up then bring them to the Vaporizer to charge them up. After a short time, the charge will be depleted. You can charge the Vaporizer up to four times, giving the maximum safer area for your Warframes to fight in.

It is considered best practice to fully charge them, then recharge once when the max range reduces by one. In this way, the consoles remain within the field at all times, and the Lotus will be able to hack with maximum efficiency, reducing the time spent in the mission.

There are three Vaporizers on the map, marked A, B, and C, so you can assign one player to look after each one, with the fourth providing backup to whoever may need it, or bringing Antiserum Charges to the Vaporizer is Infested are not spawning nearby. The map is quite small, so this is very easy to do. The mission is completed when the data is 100% decrypted, although the mission is endless so players can opt to stay in the mission if they wish.

This mission is most notable as being the place where players can farm Nidus blueprints. All Blueprints have a 14.29% chance to drop in Rotation C, and the mission follows an A-B-B-C rotation.