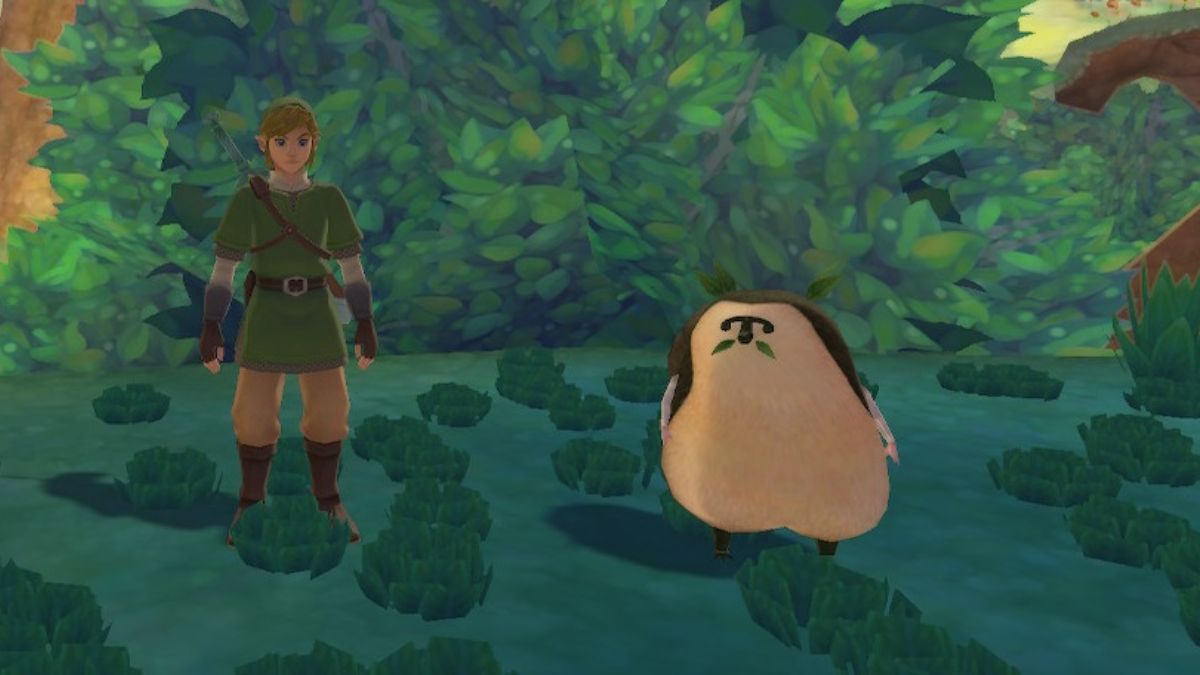 Your first foray into the Faron Woods from The Legend of Zelda: Skyward Sword HD is a pleasant one, but you’re first greeted by a somewhat dull task. You have to find all three kikwis for Elder Bucha to remember where Zelda is. We do have to thank him for saving her, but it’s still an annoying trial just for information. Thankfully, we have all the locations of the kikwis for you.

The first kikwi is rather simple. As soon as you’ve finished talking to Elder Bucha, turn the camera behind you to see a place to crawl under.

Climb up the moss and walk across the tightrope. Make sure Link is balanced with a subtle touch of the left stick. You’ll see bombs along the way. Drop down by pressing the left analog stick and press it again to jostle it off the rope. Once you’re over and encounter the boboklin going after the kiwki, it will summon a wave with its horn. To take out all five, use a spinning attack. Once you’ve saved him, use a dash attack on the tree by sprinting and pressing the left analog stick to roll into it. To get out of the pit you’ve found yourself in, climb the vine and swing out of the area.

Fall down to the right of Elder Bucha. Climb back up the hill and once you’re in the overpass under a tree, immediately turn left. Take out the bokoblin and then start dowsing. You can switch the target by holding the dowse button and shifting the direction to the kiwki picture rather than Zelda. Use the rumble and the aligned purple circle to determine where to go next. After beating the bokoblin, go north east under another overpass and turn left to go up a small hill. You’re now on the overpass. On your left is a piece of heart. Go and grab it while you’re in the area.

Otherwise, continue to the right. You should see a bigger tree with three pieces of fruit dangling on its branches. Run and bash it by pressing the left stick to get 5 rupees. Next, you’ll see a hole in the ground to the left of the tree. Fall down it. Be careful because the landing area is small. Now, immediately go left. You should see the kiwki at the end of the passage. Once again bash the tree in front of it to get another 5 rupees.

For the third kikwi, follow the same path under the overpass just like the second but this time keep going forward. You will eventually see some grass blocking your way. You may have to take out the Octorock to the left of it. Simply stab the rocks that it sends at you to deflect them. Back to the grass.

Swing your sword to rid yourself of this patch of grass, and then you’ll see a hole that Link can crawl into. Walk into the gap to have Link crawl under it. Once he’s through, there will be three bokoblin to battle. Swiftly take them out.

Once they’re dealt with, pass the big tree and you’ll see a bulge of land in front of it. Walk up it and then climb the moss on the wall. Once you’ve maneuvered around the moss, you’ll see the second kikwi camouflaging in the grass. Slash the grass away, and you can talk to it!

After finding all three kikwis, return to Elder Bucha. For your troubles, you’ll be given a slingshot and Zelda’s location.