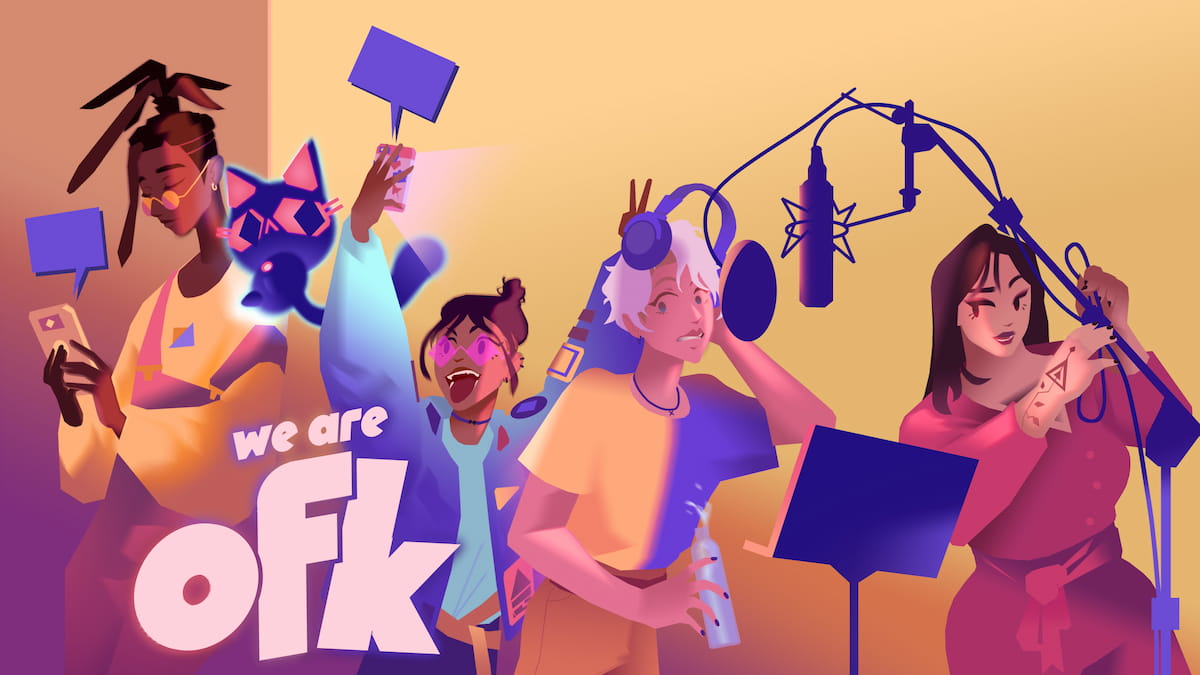 We Are OFK, the episodic music biopic game coming to PS4 and PS5 in 2022, looks set to be an amusing and heartfelt addition to the annals of narrative games. Charting the founding and career of indie group OFK, the game will let players follow along in the day-to-day lives of the band’s members, with artful writing and fully-voiced dialogue. But just who are the folks behind those voices? Plenty of talented individuals have made it into the cast (including the near-ubiquitous Yuri Lowenthal), but here are the main cast members who will be guiding you through We Are OFK.

Fans might recognize Ally Maki’s voice from her role as Giggle McDimples in 2019’s Toy Story 4, or perhaps as recurring character Ikumi from Netflix’s Dear White People. But We Are OFK will see Maki stepping into the shoes of Itsumi Saitō, the band’s “heartfelt and sometimes chaotic keyboardist.” As well as being a talented actor, Maki also runs the apparel company and advocacy group Asian American Girl Club.

Actor, director, and writer Syhaya Aviel takes on the role of Carter Flores, the group’s audiovisual artist. Anything cool and fancy players will see on stage in the game is going to be the result of Flores’ technological wizardry. Aviel may be a lesser-known figure in the industry, with a role as Jasmine in 2019’s The Circle arguably her biggest credit to date, but if the trailers are anything to go by she’ll bring a cool and collected performance to We Are OFK.

Described by the We Are OFK team as “one of the most caring and insightful humans on the planet,” England-born Fiona Rene will be voicing producer and “powerful music wizard” Jey Zhang. Here credits include Detective Kara Lee in ABC’s Stumptown and Lyla in Amazon Prime’s I Know What You Did Last Summer, Rene is sure to bring an appropriately caring but no-nonsense approach to the character.

The band’s charismatic vocalist Luca Le Fae will be voiced by none other than the game’s own creative director, Teddy Dief. Some fans might recognize Dief from the credits of Hyper Light Drifter, on which they worked as a designer and writer. Somehow finding the time to record dialogue in amongst all their other duties, Dief will be providing a romantic and humorous take on the character of Luca. If the recent trailer from the October 2021 State of Play show is anything to go by, their rendition will bring plenty of laughs to the game.