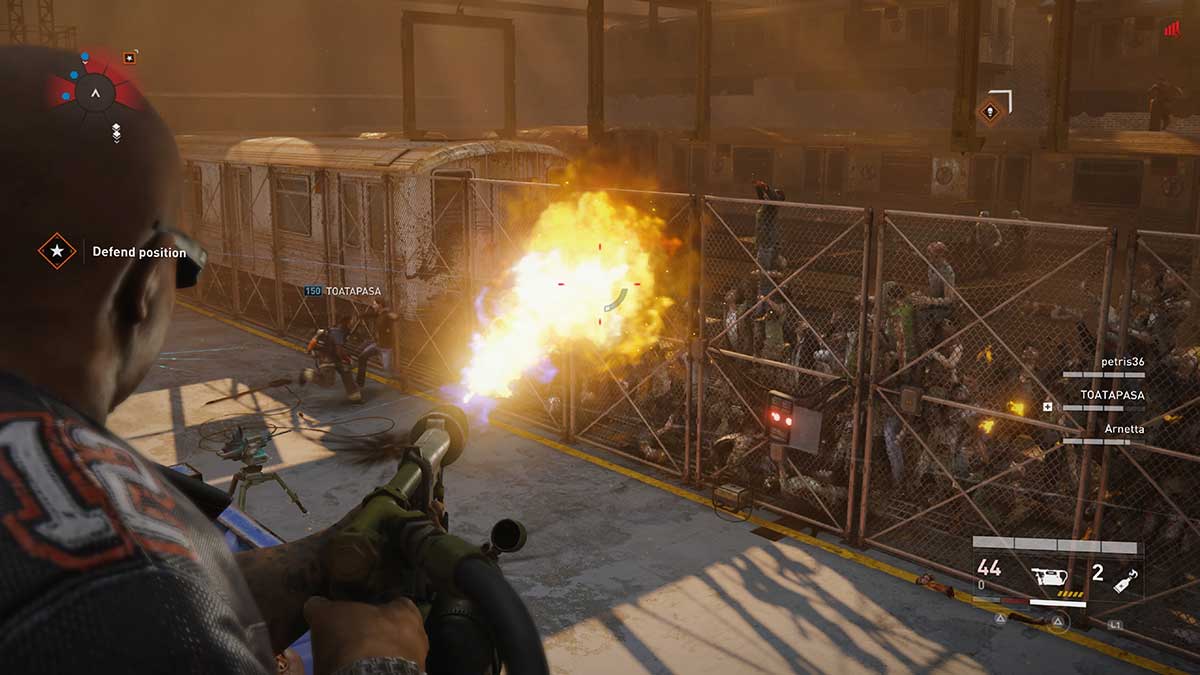 This week in World War Z, you’re heading back to the heart of New York in challenge mode. A new combination of modifiers turns what is usually a fairly easy mission into a hectic nightmare.

The modifiers this week are as follows.

To bring this all together, you’re only going to be able to pick up chainsaws from weapon drop points. Ability stocks are still in the mission, and there are two opportunities to grab a flamethrower, but otherwise, you’ve got to get used to this melee-heavy weapon. You’ll need it, too, because the waves of zombies are going to be twice as large as they are in the normal version of this mission.

This mission is so much easier when you keep the noise down. We found that we had the most success when we began the mission with three AI teammates, with other players joining in much later. The key is never to run or use noisy weaponry.

When you sprint, nearby zombies will get up and attack. The sprint also draws in hordes, and since they’re twice as regular, you get overwhelmed very quickly. Using silenced weapons, which all classes have access to, you can keep the noise you make to a minimum. If you’re consistent, you can reach the first defensive point, where you need to move the train without any hordes swarming you.

Look for the flamethrower

With the modifiers this week, we didn’t expect to find a flamethrower. However, if you search in every nook and cranny, and every crate, of course, then you’ll probably find one. When you do, pick it up. It’s better that the player using the Exterminator class, or a similar offensive class, picks this up. That way, they won’t need to be depended on for anything other than killing zombies in the mission’s defensive portions.

Play to your class’ strengths

Every class needs to play their part to make this week’s challenge mode a success. Exterminators need to throw their molotovs at the hordes of zombies to keep their numbers down. Medics need to hit everyone with a stim whenever they have charges to spare, and Hellraisers need to lay as many claymores at defensive junctions as they can. Finally, Fixers should be supplying all players with explosive ammo. Since there are no ammo restock crates, the ability to reload and gain additional damage is paramount to any victory this week.

You’ll start the mission with a chainsaw this week, and there are so many littering the mission that you can swap them to stock up on ammo. Don’t neglect to use it, though. You don’t have to swing it wildly to do damage to zombies. Holding the aim button will see your character rev the chainsaw and point it forwards. Any zombies that get close will be immediately chewed up, making it a great way of defending yourself in choke points, such as the sewer or on the boat right at the end of the mission.

Use the mounted machine gun sparingly

There are mounted machine guns at both defensive points in this mission. The key to making the most of them is to use them a little for each wave of zombies. As a horde first arrives, fire at the bottom of the fences to thin out the groups climbing over them. After between 50 and 100 bullets, the horde should be small enough that you can comfortably leave the machine gun and work away at the rest of them with your own weapons. This will leave enough ammo in the machine gun for you to return to it and use it on the second horde that will attack immediately after the first.