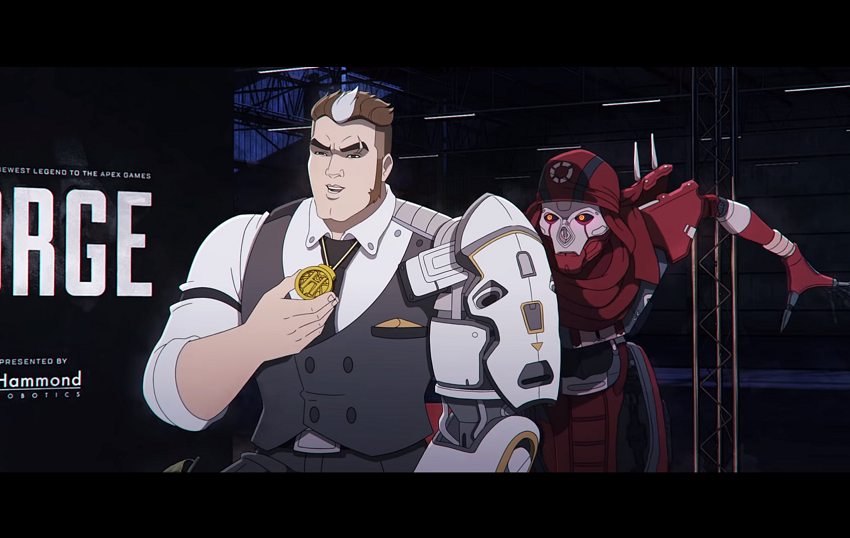 A teaser trailer dropped by Respawn Entertainment for the battle royale Apex Legends featured “Forge,” an upcoming legend for the game’s fourth season. The trailer was set in a live TV interview style, where Forge was asked by a reporter about finally qualifying for the games. According to the reporter, not everyone believed he was ready for the games.

Forge’s dialogue is filled with foreshadowing about Hammond Robotics “having his back” and bringing the fight “up close and personal” (which is also the name of the news program). Forge’s interview is cut short when the lights flicker, though, and Revenant appears from the shadows to stab the potential legend in the back, ending his career.

The website’s Season 4 page updated following the trailer. It originally featured Forge as if he was coming to the game in the next season. Now his image is grayed out and the text reads “RIP Jimmy ‘Forge’ McCormick” and the tag “Never defeated (except that one time).”

While there’s no image of his assassin, Revenant, on the website yet, it would seem Revenant is stabbing his way into the arena. With Forge dead, someone has to take his place, and Revenant seems to be the most likely one.

Forge and Revenant were leaked in concept art images and data mining in previous months. Revenant was featured in some early map concepts and during the Halloween event. Images of Forge were released late last week, complete with announcements of the upcoming legend and gun.

It would seem Forge was designed just so Revenant could make an entrance. The only piece of him to make it to the game will be a memorial charm. The charm also confirms that Forge is permanently dead and will not respawn in the near future.

Apex Legends’ pulled an admirable bait and switch here. The dedication to keeping Forge in active development only to use him to introduce Revenant is an interesting and creative tactic. While Revenant hasn’t been officially confirmed for Season 4, the newest trailer seems to imply he will make an appearance soon.