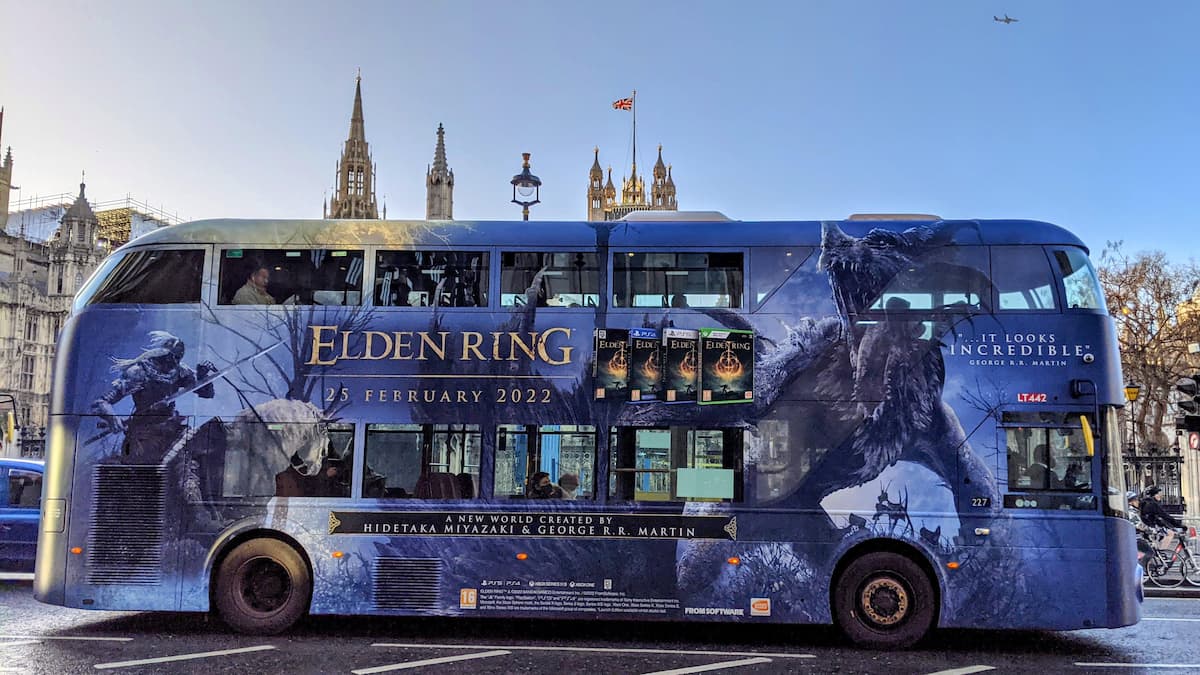 Folks have started to notice an Elden Ring-branded bus rolling around the United Kingdom, and it is certainly a sight to behold. It’s incredibly gaudy, as it’s effectively an overdesigned GameStop preorder ad plastered onto the side of a double-decker bus. Given the ridiculous nature of this thing, FromSoftware fans have been having a field day joking about what Bandai Namco has dubbed the “Elden Bus.”

One feature of the bus that has caught quite a few eyes is the quote by Game of Thrones creator George R.R. Martin near its front. “It looks incredible,” reads the quote. Many were quick to point out that Martin actually worked on the game, before subsequently poking fun at how self-congratulatory this element of the bus is.

“[George R.R. Martin] really just put that his own game looks good on a bus ad,” said Mothman_Enjoyer on Twitter.

Several also joked about where you might end up if you were to board the Elden Bus. “This is how you get to the Lands Between,” read one Redditor’s comment. The Lands Between is Elden Ring’s primary setting. One Twitter user mused that “it plays the new area noise when you walk into [it],” referencing the iconic, jarring sound cue that plays when you come across a new area in both Dark Souls and Bloodborne.

Speaking of Bloodborne, fans of that PlayStation exclusive loved that the bus was spotted in London, which is commonly believed to have been one of the key inspirations in crafting Bloodborne’s setting of Yharnam. JetHamster on Reddit photoshopped the bus into a screenshot from the game, which left many in the r/EldenRing community amused.

One trending post by Heisen-Bro addressed the bus as the “hype bus,” seemingly giving form to the metaphorical hype train that has existed since Elden Ring’s announcement. Regrettably, it looks like only U.K. residents will be able to physically board this “hype bus,” but if FromSoftware fans’ reactions are any indicator, there are a ton of people who sure wish they could.