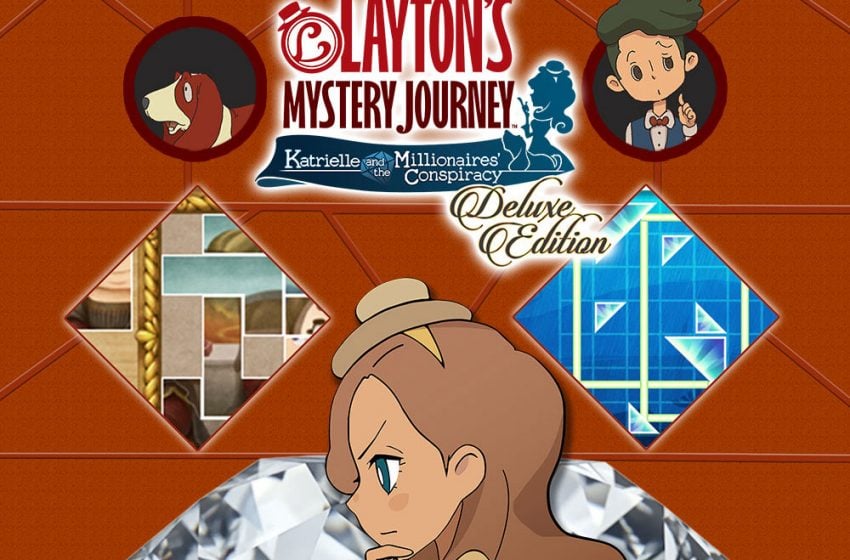 Puzzle solvers of all ages rejoice! The beloved Layton series is finally on the Nintendo Switch and, even though it isn’t a new game, Layton’s Mystery Journey: Katrielle and the Millionaires’ Conspiracy – Deluxe Edition has enough of that familiar charm to keep you satisfied.

Originally published back in 2017 for mobile and the Nintendo 3DS, Layton’s Mystery Journey: Katrielle and the Millionaires’ Conspiracy brought the franchise into a post-Hershel Layton world, with his daughter, Katrielle Layton stepping into his role as a renowned detective.

This deluxe version of the game not only combines all of the DLC content for the original but also adds another helping of new puzzles and clothing to the mix. It is also the first time players who play the game on Nintendo consoles will get to see the cutscenes and models in HD, which is an incredible improvement right from the start.

This has been a release in the works for over a year after it dropped in Japan last August, but it was well worth the wait.

As soon as the music starts playing for the game’s opening, fans will be able to feel the nostalgia that brings back good memories of spending countless days in the company of a witty Professor who would solve any puzzle in his path.

Katrielle or Kat, as she likes to be called, gives off the same charm as her father did for six games right away, which is good since we are already supposed to believe that she is an established detective in her own right. We also get hit right in the feels as a younger Kat chases her father in a dream before waking up in tears.

In typical Layton fashion, we learn nothing about what happened to the good old Professor and instead jump right back into a happier scene as Kat gets ready and finishes opening up the new “Layton Detective Agency.” We are then quickly dropped right into the prologue and introduced to the other main characters, a talking dog who is later named Sharl, short for Sherlock Holmes, and Kat’s self-appointed assistant Ernest Greeves.

From there, the game falls into a natural flow that fans of both Professor Layton and Phoenix Wright games know well. Kat is presented with a new case or scenario at the start of each case and must piece together clues and work with her partners to solve puzzles to find out what is going on.

The game doesn’t skip out on the references for returning fans, throwing in occasional lines about how Kat wants to be just like her father and is looking for the same cases he used to solve. If you have played even one of the previous games, you will feel right at home here even if the scope is smaller.

It is also important to mention that the plot will draw you in with a simplistic look before hooking you with that distinct allure that all of the Layton games have. So for anyone who thinks the relatively slow start isn’t worth it, buckle up and enjoy the ride.

The characters are charming, if a little one-note outside of Kat herself, and every bit of build up in each Case has at least a little bit of classic Layton in them, especially in the puzzles.

Back to the Basics (with a few additions)

And speaking of puzzles, the Layton formula hasn’t changed much over the years; in fact, since the first game released in 2008, it has been more like the team at Level-5 want to make the most polished games they can without breaking the mold.

That isn’t a bad thing either, as each game added more and more to provide more significant challenges and broaden the scope of just what the Professor and his friends would be facing. And because this is our first game in a new saga, the improvements remain while the scope has been narrowed.

If this is your first time playing this game and you are coming from one of the originals, some important changes improve the quality of life even further, such as better map management and more intuitive puzzle controls. The pacing is also perfect when it comes to mixing story beats with puzzles, and especially in the first five hours; there are only a few instances where I was frustrated with a situation.

Hint Coins are back and just as evident and fun to find as ever, and the Daily Puzzles featured in other versions of this game and, to an extent, some of the other Layton 3DS titles. But there are also features such as minigames you can play from your menus, a Wardrobe and Office editor, and much more that I won’t spoil here which were not around when the Professor was at the helm.

You can exchange Fashion Farthings for outfits that Kat can wear in the 3D model interactions. There were 50 outfits added to the game in the Deluxe Edition, along with new furniture options to customize your office too. There are even a few familiar outfits that might bring back some memories.

On top of that, there are an additional 40 puzzles in this version of Layton’s Mystery Journey, and several older ones have been swapped out for more challenging or dynamic puzzles. The first example I encountered was an older puzzle called A-Maze-Balls that was in the original was replaced with one called The Houses in the opening Case.

That provides a nice little change for someone like me who has already played the game to completion twice before.

Layton’s Mystery Journey had a solid presentation on the 3DS, but now that all of the cutscenes, models, and art are shown in HD, the game shines.

I am not the biggest fan of the 3D models for the characters, especially Sharl’s puzzle-solving pose, but they aren’t bad enough to hamper the rest of the game’s artwork and overall charm. The diverse character designs and use of different color palettes work for the game on the big screen.

The single-screen experience doesn’t hinder the looks, movement, or gameplay at all, either. I think Level-5 developing a version of the game for Android and iOS helped the team learn how to make the loss of a touch screen negligible.

And as I said before, the music is stellar as always and lives up to the high standards that the previous games have set for the franchise. It is great to hear some of these fantastic tracks from the series composer Tomohito Nishiura again.

Each character felt unique in the cutscenes and when models and textboxes were just representing them. The writing felt very on point for the series, and so did the voice acting for the most part.

However, this also brings me to my biggest issue with the game.

The gameplay is excellent and there wasn’t much lost in the translation over to Switch, but that, unfortunately, means the audio issues that plague the cutscenes are also present just like in the previous versions.

In cutscenes, the audio mixing seems to heavily favor both the music and sound effects over the voice acting, which would generally be fine if it wasn’t so distracting during crucial moments of the game. I was okay with the louder music, but the character voice and SFX audio level slider are combined, so you can’t even fix it by adjusting the master volume.

It also doesn’t help that there are several instances of a character talking and then either quickening the sentence structure to meet the lip flap or getting cut off by a nearly overlapping follow up from another voice from the same scene. It made some of the iffy performances really stand out and even ruined what could have been stellar moments in the story because the actor didn’t nail the delivery or was shorted by another cue.

Some of those audio problems translated to the end of a cutscene, too. The music will fade with the ending, and then when the 3D models appear on the screen, the same music will start the loop from the beginning with little to no fade in. I already questioned some of the directions when it came to using individual tracks for specific scenes, but this made those moments stick out heavily.

Thankfully almost every track in this game is great, and I was never annoyed for long because the story beats would pick up the slack quickly.

The Switch version of Layton’s Mystery Journey is like an old friend trying to improve their wardrobe. They end up looking much nicer after the change, but the content on the inside remains the same — with perhaps said friend acting slightly different because of the shift.

The Professor Layton series is one of if not my favorite franchise in all of gaming because it takes a typical detective narrative and flips it on its head in a way that nothing ever feels like it is too dumb for older fans or too adult for the younger audience. I can always pick up any of the games, including this one, and enjoy a fun ride that is equivalent to re-reading one of my favorite books because I want that comfortable feeling they provide.

I have already beaten this game on both 3DS and mobile, and I will be beating it again because the Deluxe Edition adds enough variation in the puzzle structure and provides a few new pieces of side content that make it the definitive way to play this game.

Despite the occasional audio error or odd moment in a cutscene, Layton’s Mystery Journey: Katrielle and the Millionaires’ Conspiracy – Deluxe Edition is a gem of a game that does a great job continuing the franchise’s legacy. It is a fun 18 plus hour adventure spent unraveling an exciting story that promises more puzzles than you will know what to do with.

The Layton formula still holds up wonderfully, and this is another puzzle worth solving.

Disclosure: Our review copy of Layton’s Mystery Journey: Katrielle and the Millionaires’ Conspiracy – Deluxe Edition was provided courtesy of Nintendo.